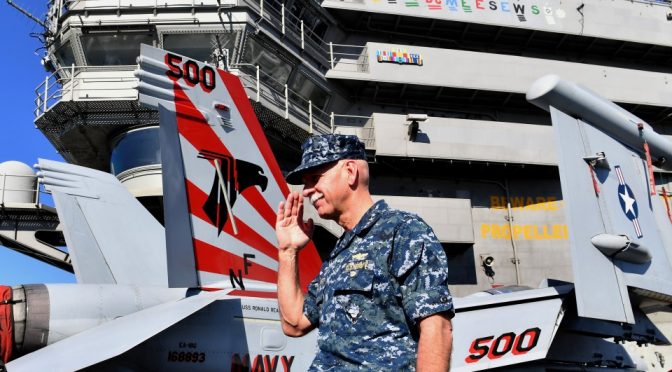 The current collapse of the unipolar world, with the inexorable emergence of a multipolar framework, has enabled a terrifying subplot to run amok – the normalization of the idea of nuclear war.
The latest exhibit comes in the form of a US admiral assuring everyone he’s ready to follow President Trump’s orders to launch a nuclear missile against China.
Forget about the fact that a 21st century nuclear war involving great powers will be The Last War. Our admiral – admirably named Swift – is simply preoccupied by democratic minutiae, as in “every member of the US military has sworn an oath to defend the constitution of the United States against all enemies foreign and domestic and to obey the officers and the president of the United States as commander and chief appointed over us.”
So it’s all about loyalty to the President, and civilian control over the military – irrespective of the risk of incinerating untold masses of said civilians, Americans included (as there would be an inevitable Chinese response).
Swift, once again, to the rescue: “This is core to the American democracy and any time you have a military that is moving away from a focus and an allegiance to civilian control, then we really have a significant problem.”
It doesn’t matter that the proverbial spokesman on behalf of the US Pacific Fleet – in this case, Charlie Brown (an apt name?) – swiftly engaged in damage control, deriding the premise of the (nuclear) question as “ridiculous.” Both the question and the answer are in fact quite revealing.

MacArthur’s park is melting in the dark

To shed extra nuances on “civilian control of the military,” a flashback to September 1950 and the Korean War, with some help from Bruce Cumings and John Halliday’s Korea: The Unknown War, may be far from “ridiculous.” Especially now that factions of the War Party in Washington have been pressing the case for nuking not China but North Korea itself.
It’s key to remember that by 1950 President Truman had already issued a “civilian control of the military” order to drop two atomic bombs over Japan in 1945 – a historical first.
Truman had become Vice-President in January 1945. FDR treated him with the utmost disdain. He was clueless about the Manhattan Project. When FDR died he had been Vice-President for only 82 days, and became POTUS knowing absolutely nothing about foreign policy or the new military/nuclear equation.

Truman had five years after bombing Japan to learn all about it, on the job. Now the action was on the Korean front. Even before an amphibious landing in Inchon, led by General MacArthur – the greatest since D-Day in Normandy, in 1944 – Truman had authorized MacArthur to advance beyond the 38th parallel. There’s substantial historical debate that MacArthur was not told exactly what to do in detail – as long as he was winning. Fine for a man who was fond of quoting Montgomery: “Generals are never given adequate directives”.
Still, MacArthur did receive a top secret memorandum from Truman stressing that any operations north of the 38th parallel were authorized only if “there was no entry into North Korea by major Soviet or Chinese Communist forces, no announcements of intended entry, nor a threat to counter our operations militarily”.
And then, MacArthur received an eyes-only message from Pentagon head George Marshall: “We want you to feel unhampered tactically and strategically to proceed north of the 38th parallel.”
MacArthur kept going. He was sure China would not intervene in Korea: “If the Chinese tried to get down to Pyongyang there would be the greatest slaughter.” Well, he was wrong. US forces captured Pyongyang on October 19, 1950. Exactly the same day, no fewer than 250,000 soldiers of the 13th Army Group of the Chinese People’s Volunteer Army crossed the Yalu river and entered Korean territory. US intel was clueless about what military historian S.L.A. Marshall described as “a phantom which cast no shadow”.

The North’s industry and infrastructure was totally destroyed. It’s impossible to understand the actions of the leadership in Pyongyang over these past decades without considering how this human and physical destruction is still very much alive in their minds

MacArthur progressively ran amok, including calling for nukes to be used on North Korea. He had to go. The question was how. The civilians – Dean Acheson, Averell Harriman – were for it. The Generals – Marshall, Bradly – were against it. But they were also worried that “if MacArthur were not relieved, a large segment of our people would charge that civil authorities no longer controlled the military”.
Truman had already made up his mind. MacArthur was replaced by Lt. Gen. Ridgway. But the war folly still raged, hostage to the Sino-Soviet “threat” of “communist world domination”. Over two million North Korean civilians were killed. And what General Curtis LeMay – a real- life Dr. Strangelove – later said about bombing Vietnam “back to the stone age” actually was inflicted by the US on North Korea.
The North’s industry and infrastructure was totally destroyed. It’s impossible to understand the actions of the leadership in Pyongyang over these past decades without considering how this human and physical destruction is still very much alive in their minds.
So what Admiral Swift actually said, in code, is, if a civilian order comes, the US military will start WWIII (or WWIV, if one counts the Cold War), duly applying the Pentagon’s first-strike doctrine. What Swift did not say is that President Trump also has the power to pull a Truman and fire any run-amok, aspiring MacArthur clone.
Photo: Commander of the U.S. Pacific Fleet Admiral Scott Swift aboard the USS Ronald Reagan in Brisbane, Australia, July 25, 2017. Photo via Reuters

4 thoughts on “When in Doubt, Nuke China”