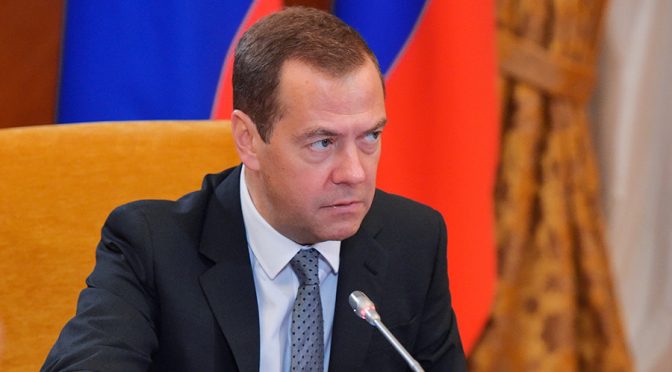 The US establishment has fully outwitted Donald Trump and used his administration’s weakness to declare a fully-fledged economic war on Russia, Prime Minister Dmitry Medvedev has said, adding, that the move leaves no doubt that bilateral ties will never improve.

The US President's signing of the package of new Russia sanctions ends hopes for improving our relations https://t.co/UizYaTbSR6

From Medvedev’s FB page:
“The US President’s signing of the package of new sanctions against Russia will have a few consequences. First, it ends hopes for improving our relations with the new US administration. Second, it is a declaration of a full-fledged economic war on Russia.
Third, the Trump administration has shown its total weakness by handing over executive power to Congress in the most humiliating way. This changes the power balance in US political circles.
What does it mean for them? The US establishment fully outwitted Trump; the President is not happy about the new sanctions, yet he could not but sign the bill. The issue of new sanctions came about, primarily, as another way to knock Trump down a peg. New steps are to come, and they will ultimately aim to remove him from power.
A non-systemic player has to be removed. Meanwhile, the interests of the US business community are all but ignored, with politics chosen over a pragmatic approach. Anti-Russian hysteria has become a key part of both US foreign policy (which has occurred many times) and domestic policy (which is a novelty).
The sanctions regime has been codified and will remain in effect for decades unless a miracle happens. This legislation is going to be harsher than the Jackson-Vanik amendment as it is overarching and cannot be lifted by a special presidential order without Congress’ approval.
Thus, relations between Russia and the United States are going to be extremely tense regardless of Congress’ makeup and regardless of who is president. Lengthy arguments in international bodies and courts are ahead, as well as rising international tensions and refusal to settle major international issues.
What does it mean for us? We will steadily continue our work on developing the economy and social sector, take efforts to substitute imports, and solve major national tasks, relying mostly on ourselves.
We have learned to do so in the past few years, in conditions of almost closed financial markets as well as foreign investors’ and creditors’ fear of investing in Russia upon penalty of sanctions against third parties and countries. To some extent, this has even been to our advantage, although sanctions are meaningless overall. We will cope.”

5 thoughts on “The US Establishment Fully Outwitted Trump | Medvedev”