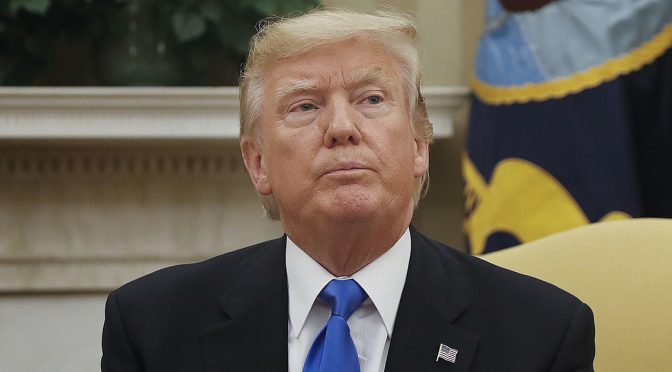 Trump knows that the latest set of sanctions against Russia, et al, is useless, and may backfire at most, yet he still signed his name into it. That only proves that he is not the type of leader that the US war veterans were expecting him to be, and this singular event will characterize the entire administration for the whole 4-year term.
Politico said,

President Donald Trump on Wednesday signed a bipartisan bill placing new sanctions on Russia — but in a statement, he claimed multiple aspects of the legislation violate the Constitution.
The sanctions, aimed at punishing Russia for its interference in the 2016 election, limit the president’s power to lift the sanctions without congressional approval and were initially resisted by the administration.
In one of two statements released almost simultaneously Wednesday morning by the White House, Trump said he supports the law’s efforts to crack down on the actions of Iran, North Korea and Russia. But the White House protested what it sees as congressional encroachment on the president’s power in foreign affairs.
“In its haste to pass this legislation, the Congress included a number of clearly unconstitutional provisions,” Trump said in one statement. “My Administration particularly expects the Congress to refrain from using this flawed bill to hinder our important work with European allies to resolve the conflict in Ukraine, and from using it to hinder our efforts to address any unintended consequences it may have for American businesses, our friends, or our allies.”

Our relationship with Russia is at an all-time & very dangerous low. You can thank Congress, the same people that can't even give us HCare!

Our relationship w/ Russia is at dangerous low. You can thank Putin for attacking our democracy, invading neighbors & threatening our allies

While we can assume that indeed, there’s a war between Trump and Deep State Congress, but what if this is all by design, i.e. a system feature whereby the US president is insulated, or has full deniability, from whatever  the “representatives of the people” so desire in order to punish Russia, and all other enemies of the US?
Nevertheless, this does not remove the fact that Trump is not capable of going against Congress when the latter is wrong. But he can always complain as if he is just another man on the street.

In an article that will appear in Monday’s edition of Sports Illustrated, Golf Magazine reported this week, the president told some members of Trump National Golf Club in Bedminster, New Jersey, before a recent round of golf that he frequents the club because “that White House is a real dump.”
The president’s reported comments were amplified by other media outlets that seized on that portion of Golf Magazine’s article. Trump, however, disputed the reporting, as he often does.
“I love the White House, one of the most beautiful buildings (homes) I have ever seen,” Trump tweeted. “But Fake News said I called it a dump – TOTALLY UNTRUE.”

Swamp or dump, they are all true, Mr. Trump. So, if you have no conviction for whatever you believe in, then you are just the same as any other of your countrymen, who are still stuck at your “Make America Great Again” speech.
Changing America requires real hard work, and taking risks, which seems nobody is willing and able to do it. At most, all they can do is identify the culprit, but are not willing to put themselves on the front lines. While the rest are just high in fluoride, and aluminum, they think everything is alright and perfect in America.
If Trump will continue to be subservient to the US Congress, and other Deep State agencies, then the Crown’s objective to destroy Protestant America has come.
Russia, in the meantime, considers the latest sanctions as a full pledged economic war against the federation.