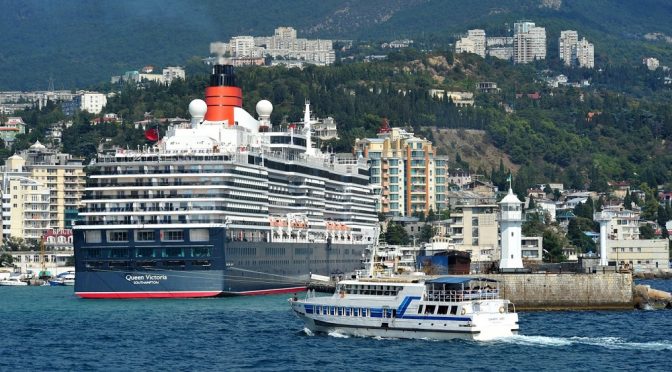 Concerning Ukraine and Crimea, the general ignorance of the western populations allows the media to create fake news. There are few that can reply to the mythmaking.
Given the events in Ukraine, Crimeans, to a man, wanted off that sinking ship. Ukraine today has no functional economy. The state has no legitimacy since it took power through violence. The currency is propped up only by foreign aid.
On March 16 2014, a referendum was held in Crimea, and it asked two questions: “Do you support the reunification of Crimea with Russia as a constituent entity of the Russian Federation?” and “Do you support the restoration of the 1992 Constitution of Crimea and the status of Crimea as part of Ukraine?” These were asked this way to avoid any “leading” wording. It used both negative and positive verbiage to make absolutely certain the result was honest and objective. 135 observers from almost 30 countries oversaw the polling. Their report was uniformly positive as to its fairness.
As usual, and in the face of all the facts, the US condemned the result as illegitimate two days before it occurred. Of course, the sheer popularity of Russia in Crimea made fraud absolutely redundant. No one denies this, so stuffing ballot boxes would be absurd. The US media, corrupt and manipulative, pretended the referendum was done “at gunpoint.” Since so few could give an educated rebuttal, the label stuck.
Putin and Russia in general have always been popular among Crimeans. This has never been disputed. This has only become more pronounced as Ukraine entered Fourth World status. Since reunification with Russia, tourism in this beautiful part of the world has increased substantially. Since the Ukrainian hryvnia is worthless, adopting the ruble automatically meant that savings and assets massively increased in value. Crimeans became roughly 110% richer merely by coming under Russian control.
Crimea was saved from the disaster of Ukraine. There, all social services have been drastically cut since the coup. Hospitals charge for food, as do public schools. All pensions have been drastically cut back as utilities and inflation has skyrocketed. Industry is all but gone, either too old to work or long sold off to foreign investors to pay debt. The average monthly wage is roughly $150 a month with a local cost of living not too far from the modern west. In 2015, salaries throughout Ukraine fell by over 50%.
The Ukrainian birth rate fell by 25% since the coup. Thousands of elementary schools were closed and all school buses were taken by the army. Heart treatment centers were closed nationwide as too expensive. Many hospitals shut down. One third of all small companies in Ukraine have closed and the rest are barely functional. Over 30 international brands have shut down their distribution network in Ukraine. There is simply nothing left.
Due to Ukrainian and American mismanagement, the Crimea suffered substantial inflation of almost 70% over two years. Thanks to the introduction of the ruble, wages increased well over 110%. Upon taking the ruble, salaries rose that very moment by 50% across the board. Unemployment is now at 7% and falling. In the same period, inflation in the Ukraine reached almost 70%. Right after the coup, Ukrainian salaries fell by 20%.
Crimea, on the other hand, has now been plugged into the Russia-China axis. China has unveiled an investment plan of over $160 billion in Crimea. These are mostly infrastructure plans, including an airport. China is also interested in Ukraine, but not until the US gets out of the country and permits Kiev to be an independent state. Also, China cannot invest when the local currency is worthless.
Industrial production grew by 12.5% in comparison to 2014 and 25% for the following year.   The construction industry also shows impressive growth at 73.9%, and that’s after inflation and other factors are considered.
China is investing in trash removal, roads, utilities and housing in the Crimea. Sevastopol is today a “special economic zone” with low taxes to attract investors. A $10 billion port upgrade is also on the board with the Chinese and Russians. So long as Ukraine is under the American thumb, all investment projects are a matter of theory.
Despite these facts, Newsweek ran an article entitled “The Misery and Terror of Life Under Putin in Crimea.” Unsurprisingly, not a single economic statistic was mentioned. No reader can take such an article seriously when no numbers are used to back up the argument.
Sanctions on Russia have assisted its economy. They should be considered tariffs imposed from abroad. Domestic demand has gone up as Russian firms – rather than western ones – are doing the investing. Banks are not borrowing from western creditors, so the financial sector has become more self-sufficient. Agricultural production has increased monstrously as foreign products are off the shelves. Without foreign competition, a huge hole has opened for local entrepreneurship.
China easily took the place of the EU in both supply and demand. The EU’s demand is down as the west is drowning in debt in all sectors of its economy. One of the most stupid aspects of the violence in Ukraine starting in 2014 was the alleged desire of the “nationalists” to demand EU membership. First, the standards the EU has for becoming one of its ranks would take decades for Ukraine to meet. Second, Ukraine possesses nothing the EU needs. Third and most importantly, Ukraine does have resources the west would love to get its hands on.
This article was directly sent to us by the author, Matthew Raphael Johnson. He wrote The Third Rome: Holy Russia, Tsarism and Orthodoxy.