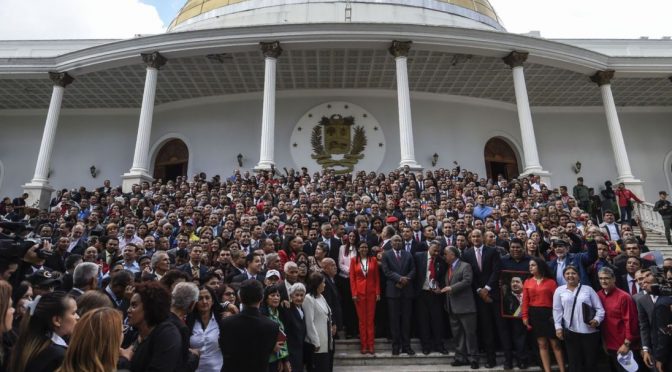 On Thursday, anti-Bolivarian Attorney General Luisa Ortega Diaz’s attempt to halt the swearing in of the democratically elected 545-seat body failed.
A court order she sought was denied – based on phony claims of unconstitutionality and voter fraud. She lied claiming “(t)he country is headed toward dictatorship.”
It’s the hemisphere’s model democracy, struggling in the face of US-orchestrated political and economic war, along with CIA-instigated street violence – classic Washington color revolution tactics used to topple independent governments.
On Friday, Constituent Assembly members were sworn in as scheduled. Thousands of Chavistas took to the streets supportively, welcoming the CA’s first working session.
Former Venezuelan Foreign Minister Delcy Rodriguez was appointed president of the body. Former vice presidents Aristobulo and Isaias Rodriguez were chosen as first and second vice presidents.
Washington, its rogue allies and the Vatican oppose political affirmation of Bolivarian social democracy – notably right wing EU and Latin American countries in lockstep with America’s imperial agenda.
Vatican history isn’t pretty. Pontiffs notoriously meddle where they don’t belong. Liberation theology supporting social justice is verboten.
Pope Francis’ high-minded rhetoric belies papal tradition, supporting wealth and power interests, paying lip service alone to popular needs and welfare.
A Vatican press statement expressed opposition to Venezuela’s CA, saying:
“The Holy See asks that all political actors, and in particular the government, guarantee full respect for human rights and fundamental freedoms, as well as for the existing Constitution; avoid or suspend ongoing initiatives such as the new Constituent which, instead of favoring reconciliation and peace, foments a climate of tension and confrontation and puts the future at stake” – code language for opposition to Bolivarian social democracy.
Over eight million Venezuelan voters disagreed, participating in CA elections, democracy in action, the way Bolivarian governance works.
Constituent Maria Alejandra Diaz likely spoke for other members, saying
“(w)e have an immense task after the National Constituent Assembly is seated -to implement justice by seeking peace.”
International observers called last Sunday’s process open, free and fair – 545 members chosen from among 6,120 candidates. President Maduro called the CA a way “to bring order, do justice and defend the peace.”
The body is temporary for as long as it takes to complete its work – revising or rewriting Venezuela’s constitution, above all aiming to restore order and serve all Venezuelans equitably.
Article 349 of Venezuela’s constitution states no other power can “in any way impede the decisions of the National Constituent Assembly” – not the president, National Assembly legislators and Supreme Court justices.
When completed, the revised or new constitution will be voted on by national referendum, Venezuelans deciding whether to approve or reject the document.
Depending on what’s in the final text, general elections could follow – for president, National Assembly members, governors, mayors and other public officials, the same process used to establish the Bolivarian Republic under Hugo Chavez in 1999.
As of now, the referendum will be held on December 19, elections for governors on December 10. Chavistas hope to hold onto the presidency and win a National Assembly majority when those elections are held.
CA president Delcy Rodriguez said its mission aims to end political conflict and street violence.
“The Venezuelan people will not turn their fate over to a violent minority. We’ve come to deepen our Constitution,” she stressed.
No easy task given Washington’s call for regime change, Rex Tillerson saying
“(w)e are evaluating all of our policy options as to what can we do to create a change of conditions where either Maduro decides he doesn’t have a future and wants to leave of his own accord or we can return the government processes back to their constitution.”
US Plotting to Topple Venezuela’s Government
Since Hugo Chavez’s February 1999 ascension to power, Washington wanted Bolivarian democracy replaced by a US sponsored regime.
Earlier coup attempts failed, another likely planned, months of US-orchestrated violence a convenient pretext to act, along with imposing illegal sanctions on Venezuelan officials.
On Wednesday, the Treasury Office of Foreign Assets Control (OFAC) sanctioned 13 current and former Venezuelan officials, along with others, wrongfully accusing them of “undermining democracy” – a US specialty at home and abroad.
Treasury Secretary Mnuchin represents US imperial lawlessness. Claiming the Trump administration “will not ignore the Maduro regime’s ongoing efforts to undermine democracy, freedom, and the rule of law” turned truth on its head.
Saying America “stand(s) by the Venezuelan people” is polar opposite US aims, wanting regime change, the country transformed into a vassal state, its resources plundered, its people exploited.
Mnuchin promised tougher actions if legitimate end of July constituent assembly voting takes place as planned. Article 347 of Venezuela’s constitution states:
“The original constituent power rests with the people of Venezuela. This power may be exercised by calling a National Constituent Assembly for the purpose of transforming the State, creating a new juridical order and drawing up a new Constitution.”
In 1999, Chavez let voters decide whether to convene a National Constituent Assembly – to draft a new Bolivarian Constitution.
They overwhelmingly approved. Three months later, National Assembly elections were held. Chavistas won 95% of the seats.
They drafted a Bolivarian constitution. A second referendum followed. Venezuelans again overwhelmingly approved it. Historic provisions became law.
Article 348 states

“(t)he President of the Republic shall not have the power to object to the new Constitution. The existing constituted authorities shall not be permitted to obstruct the Constituent Assembly in any way.”
“For purposes of the promulgation of the new Constitution, the same shall be published in the Official Gazette of the Republic of Venezuela or in the Gazette of the Constituent Assembly.”

Maduro called for a Constituent Assembly because of anti-democratic foreign and internally orchestrated violence against the nation and its people.
Dark forces allied with Washington want his government toppled. Constituent Assembly elections are scheduled for July 30. Anyone could be nominated as a candidate to participate: