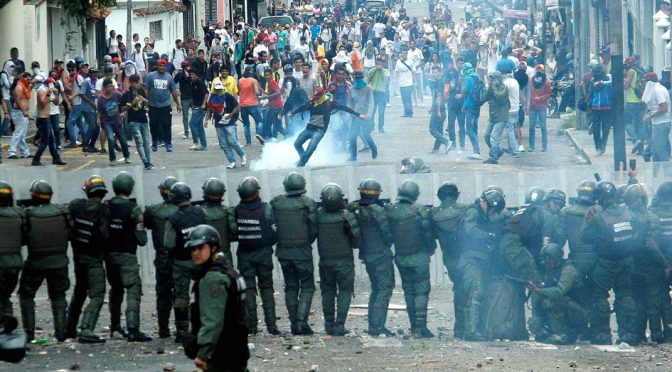 The funds have now become a mainstay of the U.S. State Department congressional budget for foreign operations.
By Telesur | 17 May 2017
Since at least 2009 the U.S. Department of State has budgeted at least US$49 million in total to support right-wing opposition forces in Venezuela who are now in their seventh week of violent protests to oust democratically-elected President Nicolas Maduro.

According to the 2010 budget justification, which designated US$6 million that year to Venezuela’s “Economic Support Fund” the budget “will support efforts to preserve and expand democratic space through programs that strengthen and promote civil society, citizen participation, independent media, human rights organizations, and democratic political parties.”
In a more detailed breakdown of the 2011 US$5 million budgeted for Venezuelan economic support, the budget indicates that US$1 million was designated specifically for the support of “political competition and consensus building.”
Throughout its budget justifications for Venezuela, the State Department repeatedly emphasizes its concern over the “increasingly authoritarian tendencies” of the governments of the late President Hugo Chavez, and current President Nicolas Maduro, in spite of regularly scheduled elections that are internationally recognized.

The 2009 budget reiterated support and continued funding for the Organization of American States in order to deploy teams of “democracy practitioners” to Venezuela and Bolivia where they say “democracy is threatened by the growing presence of alternate concepts such as ‘participatory democracy’.” The nature of the activities carried out by these teams is unclear in the budgets.
OAS General-Secretary Luis Almagro has led a campaign to ousted Venezuela from the regional organization and on April 26, the body voted to hold a meeting on the situation in the country, which Venezuela called a violation of its sovereignty, leading President Nicolas Maduro to announce the nation’s formal withdrawal from the group.
In its 2011 budget, the State Department wrote, “The United States has a major interest in preserving and strengthening Venezuelan democratic institutions.”

Since the beginning of Venezuela’s Bolivarian Revolution, with the democratic election of former President Hugo Chavez in 1998, the oil-rich nation has been repeatedly attacked as “undemocratic.” President Maduro has reiterated that elections will be held on schedule in 2018, but the opposition has demanded his immediate removal, seeking foreign intervention in its destabilization campaign.
The revolutionary government has significantly eroded the political and economic hegemony the U.S. had over Venezuelan oil, which holds one of the largest petroleum reserves in the world. Prior to the election of Chavez, in spite of its vast resource wealth, Venezuela was plagued by sharp class inequalities.
According to United Nations sources, poverty rates in Venezuela were nearing 60 percent before 1998, and by 2015 were halved to less than 30 percent in spite of an economic crisis triggered by falling oil prices. Under the Bolivarian government, health care has been made widely available through the Barrio Adentro program, and average life expectancy has steadily risen.
The U.S. government is silent on the widespread violence of the right-wing opposition groups that they fund, which in 2014 resulted in 43 deaths, of which the opposition was responsible for more than half.
Currently, violent protests by the right wing calling for Maduro’s ouster continue into their seventh week and have already resulted in at least 50 deaths and many more injuries, exceeding the causualties of the opposition violence in 2014. In spite of the government calling for dialogue and participation in its constituent assembly debates, the opposition has refused to participate and called on supporters to continue protests.
Indicating an awareness that their regime change efforts are not well-received among the mass of the people, the 2008 budget wrote, “Democracy in Latin America, as it has been promoted by the developed countries, is being increasingly defined by populist voices as exploitative and imperialist.”
According to a 2007 U.S. strategic document leaked by former CIA-whistleblower Edward Snowden in 2013, Venezuela was seen as the main adversary of the United States in the Western Hemisphere. The country was listed as one of the top six “enduring targets for the NSA,” along with China, North Korea, Iraq, Iran and Russia.