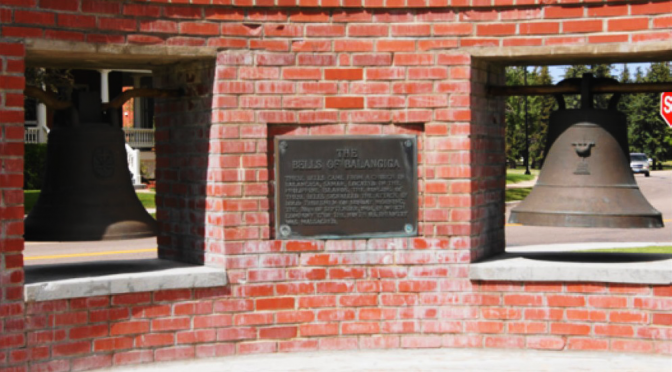 Prior to the Vietnam War in the 1960s, where some US war freaks are claiming they just abandoned and had not lost from, there was the war between the US and the Philippines, just as the local revolutionaries were winning their war against the 300-year colonization by the Spaniards, in the 1890s.
In one of these battles, the people of Balangiga, Samar, stood their ground against US oppression and torture with a highly coordinated attack on the occupying forces in their town. The casualties were almost two to one, in favor of the locals. This seemingly impossible feat against a superior force must never be allowed to inspire the rest of the islands whose population were already rising up to the new invaders.

On September 28, 1901, fifty-one [2] American soldiers of Company C of the 9th U.S. Infantry Regiment who had been stationed in the town of Balangiga, the third largest town on the southern coast of Samar Island were killed in a surprise guerrilla attack. They had been deployed to Balangiga to close its port and prevent supplies reaching Filipino forces in the interior,[11] which at that time were under the command of General Vicente Lukbán. Lukbán had been sent there in December 1898 to govern the island on behalf of the First Philippine Republic under Emilio Aguinaldo.[12]
The attack provoked shock in the U.S. public, with newspapers equating what they called a “massacre” to George Armstrong Custer‘s last stand at the Battle of the Little Bighorn in 1876. Major General Adna R. Chaffee, military governor of the Philippines, received orders from President Theodore Roosevelt to pacify Samar. To this end, Chaffee appointed Smith to Samar to accomplish the task.

The entire island of Samar was then reduced to a “howling wilderness,”

In December 1899, Jacob H. Smith (now a colonel) boastingly informed reporters in the Philippines that, because the natives were “worse than fighting Indians”, he had already adopted appropriate tactics that he had learned fighting “savages” in the American West, without waiting for orders to do so from General Elwell S. Otis. This interview provoked a headline announcing that “Colonel Smith of 12th Orders All Insurgents Shot At Hand”, and the New York Times endorsed Smith’s tactics as “long overdue.”[7]

… and the three bells of Balangiga Church, which were used to signal the attack against the US soldiers, were taken to the US mainland as war booty.

The entire island of Samar was reduced to a “howling wilderness,” as ordered by Ge. Smith, and the three bells of Balangiga Church, which were used to signal the attack against the US soldiers on that fateful day in September 28, 1901, were taken to the US mainland as war booty.
That story is from a long time ago, one could say. But no, my friend, it’s still happening now. The wars of aggression and plunder are still going on now.

BEDMINSTER, N.J. (Reuters) – U.S. President Donald Trump on Friday threatened military intervention in Venezuela, a surprise escalation of Washington’s response to Venezuela’s political crisis that Caracas disparaged as “craziness.”
Venezuela has appeared to slide toward a more volatile stage of unrest in recent days, with anti-government forces looting weapons from a military base after a new legislative body usurped the authority of the opposition-controlled congress.
“The people are suffering and they are dying. We have many options for Venezuela including a possible military option if necessary,” Trump told reporters in an impromptu question and answer session.

The US establishment, which is funding the opposition in Venezuela, is now ready to provide the military solution, too, to topple a legitimate government, just because it is not willing to surrender the Venezuelan oil industry to the robber barons.
In the Philippines, they are using a similar strategy recently used in the Middle East, i.e. the effective use of terrorist proxies, precisely to create the need for US foot soldiers on the ground.
The Duterte government politely turned down the offer, and is pressing instead for the speedy return of the Balangiga Bells during the president’s 2nd State of the Nation address, last July.
The people of Samar must never be allowed to forget their history, and the bravery of their forebears, in like manner that the Americans must never be induced to glorify any of the unprovoked wars conducted by the US military in foreign lands, in their name, and for the benefit of the bankers.
So far, all that the country got is lip service from the US ambassador.