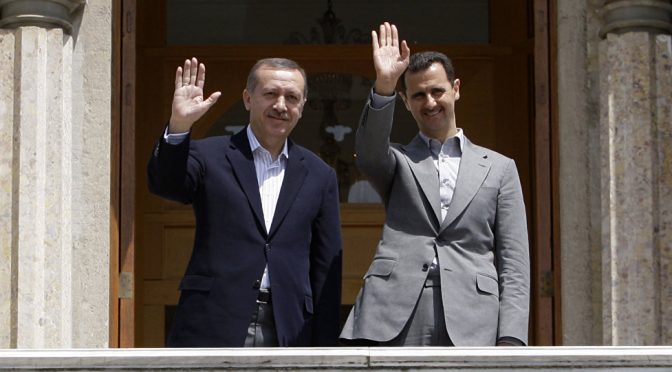 In a sign that the moderate rebels being used to topple the Assad government are slowly running out of benefactors, Turkey has announced to cut off its support for Syrian opposition and is focusing more on its problem with the Kurds.

Sputnik 10:23 13.08.2017
Turkey has stopped supporting the Syrian coalition of opposition forces. According to analyst and journalist Musa Özuğurlu, this decision is likely to contribute to normalization between Ankara and Damascus.
Turkey has decided to end its support for the National Coalition for Syrian Revolutionary and Opposition Forces (aka the Syrian National Coalition), which encompasses various opposition groups fighting in the Syrian conflict, the Syrian news outlet Zaman el-Vasl reported citing a source in the coalition.
Founded in November 2012, the Syrian National Coalition received $320,000 in annual support from Turkey.
According to Turkish political analyst and journalist Musa Özuğurlu, the decision to stop this support was prompted by Ankara’s unwillingness to give funds to an opposition organization “capable only of talking at press conferences and useless in combat actions on the ground.”
… “By abandoning support for the Syrian opposition, Turkey is making a goodwill gesture towards the Syrian government. This decision may help break the ice between Damascus and Ankara,” he said.
According to Özuğurlu, the possible cooperation between Turkey and the Syrian government would be mutually beneficial.

Meanwhile, some UK operatives in the region are busy defending their lies…

Sukla Sen Wed, 19 Apr 2017 01:29:27 -0700
[Mr Mesurier found a broad pattern to how fake news is spread.
There are three phases.
First, it usually starts with blog posts by a “supposedly independent journalist of some variety… who typically claims to be new media, anti-mainstream media”. Such posts make their way into social media echo chambers.
Anybody who tries to be critical about the assertions in the post will face resistance from the writer’s supporters whose line of argument is usually: “You are taken in by mainstream media, you are blind, you don’t see what’s really going on in the world.”
So with the blog and some social media reaction, the next phase kicks in. “State-sponsored media” like RT or Sputnik news will invite said blogger on its channel where he or she is then “introduced as an independent investigative journalist”.
This is followed by “a series of leading questions that has them
(Russia and Syria) define their story”. This narrative then enters a far larger audience. “What supports all of that is the industrial
amounts of social media, who are not real people but bots that create fake profiles.”
The final phase is when national leaders make reference to sources like Sputnik news and RT. When members of the public look into the claims, there seems to be proof because so many people are talking about it online. No matter that the origins of the claims are based on shoddy reporting in a blog. Little can be done about such sites, “they’re not accountable (to a board or editors)… they cannot be sued”, said Mr Mesurier.
Furthermore, the effort it takes to disprove these allegations “is
disproportionately greater than the amount of effort that it takes” to make it.]

Yes, you and I are mere bots with fake profiles, who are having an easy time dealing with their lies and deceit on a daily basis.

Worth remembering that #WhiteHelmets are a major weapon in UK Regime deep state arsenal, will be protected at all costs as global blueprint pic.twitter.com/akNLwrvSPb

2 thoughts on “Turkey is Showing Goodwill towards Syria, UK towards Al Nusra”