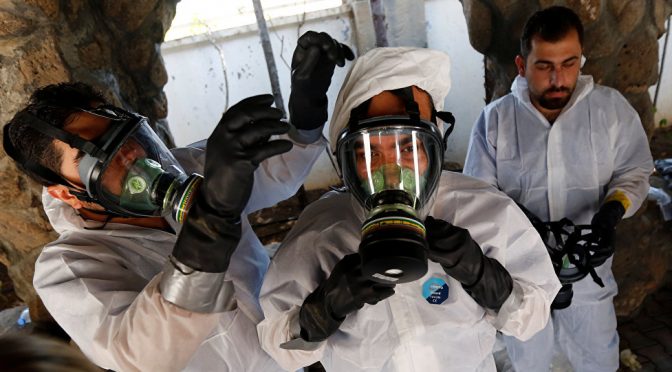 Daesh terrorists are on the run in much of the Syrian territories, and are leaving behind evidence of US/UK chemical war crimes. The mainstream media and US Congress are playing dumb and deaf again.
On Wednesday, the Syrian Foreign Ministry has accused the US and the UK of supplying CS, CN toxic agents to terrorists.
According to Syria’s Ministry of Foreign Affairs, the toxic agents found in Aleppo and Damascus suburb were produced by one British company and two American companies.
“The special equipment found consisted of hand grenades and rounds for grenade launchers equipped with CS and CN toxic agents  […] The chemical munitions were produced by the Federal Laboratories company in the US. The toxic agents were produced by Cherming Defence UK and Non-Lethal Technologies (US),” Syrian Deputy Foreign Minister Faisal Mekdad said.
According to the deputy foreign minister, the poisonous substances were found in the storehouses of the militants in Aleppo and in the eastern suburbs of Damascus.
Mekdad noted that in accordance with Article 5 of the Convention on the Prohibition of the Development, Production, Stockpiling and Use of Chemical Weapons, the use of toxic agents is permitted only to combat riots. It is prohibited to use them in warfare.
“So, we can say for sure that the US and UK as well as its allies in the region violate the Chemical Weapons Convention. They support terrorist organizations operating in Syria. They deliver to the militants not only armaments but also prohibited toxic agents,” the deputy foreign minister added.

The Western partners’ non-cooperation to an independent investigation regarding the alleged Assad chemical attack in Idlib conclusively confirmed that it was a staged attack to justify the volley of Tomahawks on Khan Sheikhoun airfield.
The ongoing mop up operation against the escaping Daesh terrorists is a very good sign of things to come for the Syrian people. This illustrates that Zionists are not invincible after all, when likeminded leaderships continue to cooperate and act decisively.