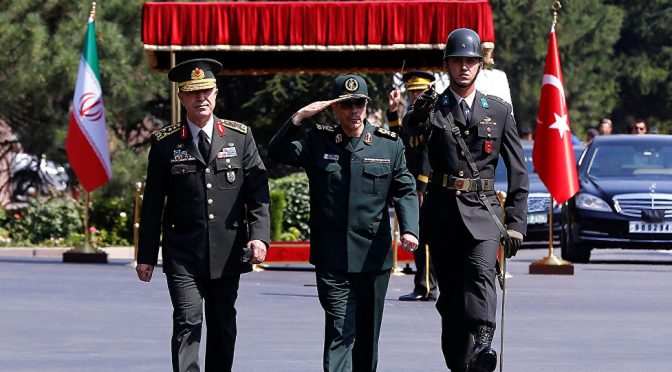 In another bold move for Turkey, the Chief of Staff of the Armed Forces of Iran General Mohammad Baqeri has traveled to Ankara on an invitation from his Turkish counterpart. This is a sign that a new geopolitical alliance is brewing and the United States is losing its decades-old influence in the region.
Since the revolution, Turkey and Iran have been aligned against one another: the former is a member of NATO and ally of the US bloc, while the latter has been a perennial thorn on the side of Washington, and the Syrian crisis was only making it worse.
It is our understanding that the only reason that these Middle Eastern warlords were cooperating with the West up until today is to insulate themselves from any regime change efforts that the latter is notoriously known for.
Iran, of course, is not a stranger to this scheme when the US and Britain targeted Iranian Prime Minister Mohammad Mosaddegh after he nationalized his country’s oil. The coup has shaped Iran’s modern history and remains the guiding principle by which it is interfacing with the West.
For Erdogan, the failed July 2016 coup against him by the CIA operatives in the country’s NATO airbase was the tipping point.
Now that both countries are exploring cooperative endeavors, especially this one that is military in nature, and adding to that is the recent visit of Libya’s National Army Commander Field Marshal Khalifa Haftar to Moscow, we can only surmise that the military misadventures of the West are ending.

Moscow is facilitating the restoration of Libya to its former glory during the time of Muammar Gadhafi by talking to all competing factions in the country. The Western criminals responsible for the plunder of the Libyan treasury, however, are still at large.
These events are what’s bringing Turkey and Iran together, and that’s a bad news for the warmongers in Washington.

“There have been no such visits between the two countries for a long time, but considering regional developments and security issues — border security and the fight against terrorism — there was a need for such a visit,” Baqeri told Iranian state television on arrival on Tuesday.

International terrorism, of course, is how these renegades are calling the Khazarian Mafia and their Deep State CIA nowadays.
It is expected that the two military organizations will tackle the Turkish problem with the Kurds that are occupying the border between Turkey and Syria, and the best strategy to deal with the remaining Daesh terrorist proxies that are already on the run in the Syrian landscape.
Iran will continue to be demonized in the mainstream media and even inside the White House. But what the West breaks, the Russian-led coalition mends.

3 thoughts on “Groundbreaking: Turkey Talks to Iran for 1st Time Since 1979 Islamic Revolution”