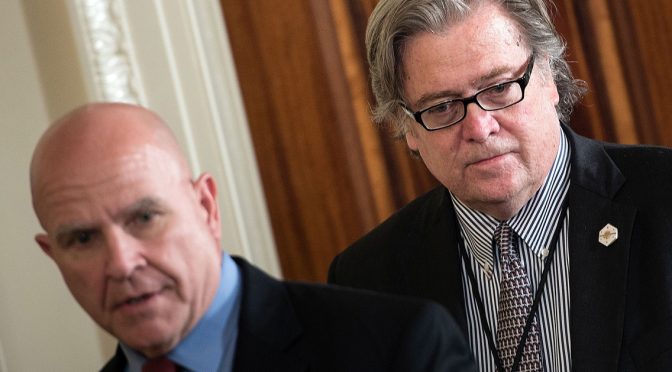 It’s undeniable that Steve Bannon inspires nationalism to some degree, which led to White supremacists and neo-Nazis exploiting the Trump shaky administration for their own nefarious agenda. Complicating the situation is the hyperactive interference of the Deep State holdovers, and some new ones.
Otherwise, it’s mostly Bannon’s fault according to Politico:

Days after Trump’s election, a giddy Bannon told the Hollywood Reporter that he was an “economic nationalist,” and then went on to explain what he meant:
“The globalists gutted the American working class and created a middle class in Asia … If we deliver … we’ll get 60 percent of the white vote, and 40 percent of the black and Hispanic vote and we’ll govern for 50 years … Like [Andrew] Jackson’s populism, we’re going to build an entirely new political movement. It’s everything related to jobs. The conservatives are going to go crazy. I’m the guy pushing a trillion-dollar infrastructure plan … It will be as exciting as the 1930s, greater than the Reagan revolution — conservatives, plus populists, in an economic nationalist movement.”
Nothing of this vision came to pass. There is no trillion-dollar infrastructure plan, or anything else resembling a “jobs” agenda. There is no multiracial economic populist movement behind Trump; his approval in the latest Quinnipiac poll is 44 percent among whites and 24 percent among nonwhites. And Bannon has lost several internal White House policy fights to his “globalist” nemeses, as Trump has flinched from junking NAFTA, gutting the Export-Import Bank, branding China a currency manipulator or raising taxes on the wealthy.
Where did Bannon go wrong? His first order of business had nothing to with jobs, let alone bridging racial divisions. He played a singular role in engineering the travel ban targeting Muslim-majority countries, cutting Cabinet agencies out of the loop and purposefully dropping it without warning on a Friday to stoke maximum weekend street protest from the left. Courts balked, and Republican members of Congress complained about the shoddy process. It was Trump’s first political defeat as president, a humiliating own-goal that sowed early doubts about the administration’s basic competence.

Whether he committed many mistakes or not, Bannon adopted Trump’s “America First” motto of spending less for oversea military adventurism, and has been a regular participant in national security debates, often as an opponent of military action and a harsh critic of international bodies like the United Nations and the European Union, reports said.
Bannon’s exit will be making an easy way for the backers of the past aggressive U.S. foreign policy in the Middle East and here in Asia, and is therefore a resounding win for Bannon’s internal rival, national security adviser H.R. McMaster.
Whether the whole circus is scripted, or not, is already a no-brainer. Each of these actors does have a role to play according to their own personality and core beliefs. The Puppet Masters can only applaud themselves for the beauty and artistic value of their constantly advancing social engineering skills.
In short, Bannon’s resumption as editor of Breitbart would be a blockbuster series for Distraction Unlimited, Inc., which will surely consume the political discussions for the next three years or so, assuming Donald Trump will last that long.