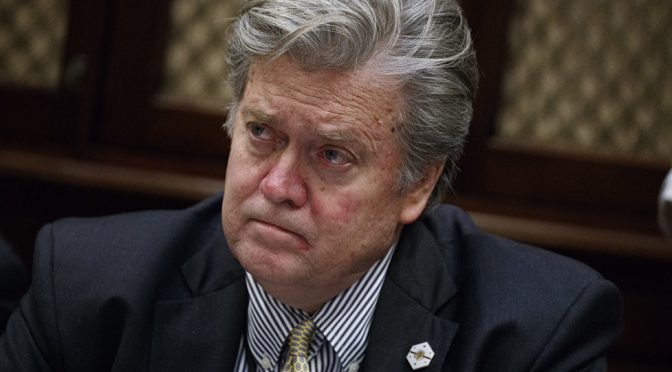 That’s the final verdict from resigned Chief Strategist Steve Bannon for what remains of the Trump administration. From here onwards, the Trump government would be a moderate, or a centrist, one that is controlled by the Republicans.

Bannon: ‘The Trump Presidency That We Fought For, and Won, Is Over.’

Departed White House strategist speaks to THE WEEKLY STANDARD.
6:18 PM, Aug 18, 2017 | By Peter J. Boyer
The Trump presidency that we fought for, and won, is over,” Bannon said Friday, shortly after confirming his departure. “We still have a huge movement, and we will make something of this Trump presidency. But that presidency is over. It’ll be something else. And there’ll be all kinds of fights, and there’ll be good days and bad days, but that presidency is over.”
Although his influence with the president waxed and waned, Bannon’s standing in the Trump circle was always precarious. Among the senior advisers competing with Bannon in trying to shape Trump’s agenda, and his tone, were the president’s daughter, Ivanka, and son-in-law, Jared. Bannon pointedly voiced criticism of those in the president’s sphere whom he considered to be globalists, or liberals (or both), and the president himself plainly bristled over the early attention that Bannon got from the press (including a Time magazine cover, which is said to have particularly irked Trump).
Bannon says that his departure was voluntary, and that he’d planned it to coincide with the one-year anniversary of his joining the Trump campaign as chief executive, on August 14, 2016.
“On August 7th, I talked to [Chief of Staff John] Kelly and to the President, and I told them that my resignation would be effective the following Monday, on the 14th,” he said. “I’d always planned on spending one year. General Kelly has brought in a great new system, but I said it would be best. I want to get back to Breitbart.”
Bannon may have resigned, but it was clear from the time that Kelly became chief of staff that Bannon’s remaining time in the West Wing was going to be short… One of those, with whom Kelly is deeply in sympathy, is National Security Adviser H. R. McMaster, who clashed forcefully with Bannon over such policies as strategy for the war in Afghanistan.

No more beautiful border wall facing Mexico. Bannon’s resignation, therefore, was good news for the immigrants, but the latter and all US citizens still have to deal with the usual Goldman globalists deeply embedded in Trump’s White House.
One should ask, was the whole electoral exercise in 2016, just another ruse to pacify the so-called nationalists who were about to explode from the sheer frustration of the 8-year Obama Goldman Sachs reign?
Of course it is, and that’s because every one of you still want to be governed. It’s not for a slave to question the behavior of its master. That’s the underlying mindset that is prevalent among these filthy DC swamp creatures.
What the Trump administration would look like in the coming days would be gauged from the debt ceiling negotiation. The US Congress has been kicking the can by raising the amount it could borrow for decades. Who would lend the US this time around? Would it still be China?
Is that the reason why Trump opens the door to investigating China’s ‘theft’ of U.S. intellectual property, to extract concessions in the form of budgetary bailout?
If that’s the case, there’s a big possibility that it could backfire.

Last Updated Aug 14, 2017 4:59 AM EDT
BEIJING — A Chinese state newspaper warned Monday that President Trump “could trigger a trade war” if he goes ahead with plans to launch an investigation of whether China is stealing U.S. technology.
In a commentary by a researcher at a Commerce Ministry think tank, the China Daily said Mr. Trump’s possible decision to launch an investigation, which an official says he will announce Monday, could “intensify tensions,” especially over intellectual property, and “poison the overall China-US relationship.”
The official told reporters Saturday the president would order his trade office to look into whether to launch an investigation under Section 301 of the Trade Act of 1974 of possible Chinese theft of U.S. technology and intellectual property.
Mr. Trump is expected to sign an executive order Monday asking his trade office to consider the probe. In the midst of a 17-day vacation, he plans to leave his New Jersey golf club and return to Washington to sign the order.
There is no deadline for deciding if any investigation is necessary. Such an investigation easily could last a year.

That’s the scenario that Trump is in right now, and the Goldman Sachs operatives are already stoking the stock markets down by raising the probability of a government shutdown next month to 50%.
That’s how the Deep State controls a sitting president who has not enough balls to dangle around.