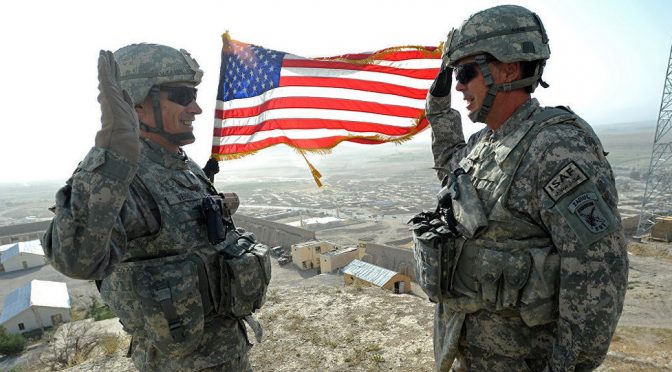 Despite what Trump said in his policy-making speech, the US will still continue to destabilize rival governments, but it’ll just do so under different pretexts.
Trump’s Afghan speech earlier this week resulted in a surprising bout of exuberance from many anti-imperialists in the Alt-Media Community who focused on the significance of three key policy-making sentences:

“…we will no longer use American military might to construct democracies in faraway lands or try to rebuild other countries in our own image. Those days are now over. Instead, we will work with allies and partners to protect our shared interests.”

These words brought hope to many that the US would no longer continue waging wars of aggression around the world under the banner of “exporting democracy”, and in a sense, that’s true. As Trump himself said, “those days are now over”, but what’s to come might even be worse.

Instead of elaborating on far-reaching “arguments” and producing a slew of “fake news” to convince the American people and the rest of the world about the “righteousness” of any forthcoming US military action abroad, the Trump Administration will be as characteristically simple as the President himself in calling things as they are.

“Protecting our shared interests”, like Trump put it, just means articulating Neo-Realistic geostrategic interests to the public at large, something which was hitherto avoided for the most part because it was seen as “unprincipled”, “self-interested”, and “against America’s global mission”.

The twist, though, is that the US will try to market its own interests as being equal to those of its regional “Lead From Behind” partners who it will designate for doing the “heavy lifting” in the theater of operations, just as it did Turkey vis-à-vis Syria up until last summer for example.
This might sometimes include a “democratic argument”, but not just for the “principled” sake of it – rather, the strategic interest that the US always had in forcibly exporting this governance model is that it allows for regular leadership transitions (“elections”) in an easily manipulable political environment (mass media, lobbyists, NGOs, etc.).

“Non-Democracies”, as the US smears them, or more impartially described as “National Democracies”, are at times useful if a pro-American strongman is in power and Washington wants to prevent him from being dislodged, since this system of governance is more secure in the face of the structural threats which abound in “Liberal Democracies”.

If a given state has a governance model which is “inconvenient” for the US’ influence projection over their territory, Washington will unleash Hybrid Wars against them in transforming Color Revolutions into Unconventional Wars so as to compel political concessions, regime change, or constitutional reform from the geostrategic transit states at the center of competitive connectivity projects.
Either way one looks at it, however, it was deceptive for Trump to say that the US won’t “construct democracies in faraway lands or try to rebuild other countries in our own image”. He deliberately left out the important caveat that while this is no longer the publicly stated policy, it will still be selectively practiced if it’s found to be in the US’ interests, especially if there’s an overlap with an ally’s as well.
For these reasons, those who got their hopes up that the US, especially under Trump, will discontinue its “export of democracy” were mistaken, since even if it does do away with this flimsy excuse for “justifying” its aggression abroad, it will nevertheless continue pursuing its grand strategic interests as it understand them, just this time possibly being more explicitly direct about what it’s doing and why.

One thought on “Don’t Kid Yourself, The US Will Still Continue 'Exporting Democracy'”