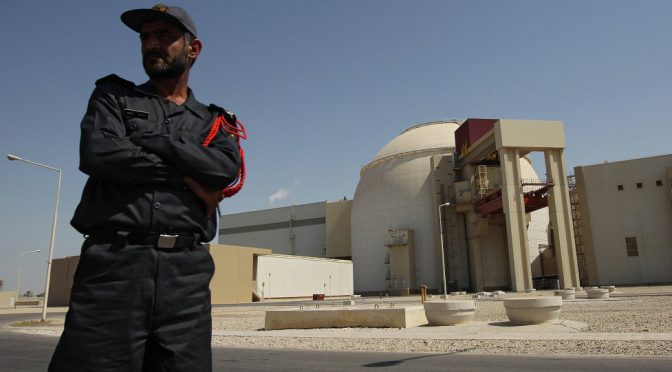 Neither Iran nor its business partners are interested in Tehran’s exit from the Joint Comprehensive Plan of Action (JCPOA), expert on Mideast affairs Vladimir Sazhin told Sputnik, explaining that contrary to the panic-mongers’ belief Iran won’t be able to create an atomic bomb within weeks in case it withdraws from the nuclear deal.
Those panic-mongers who speculate that Iran could create atomic weapons in a matter of days in case it withdraws from the nuclear agreement, may sleep well: in the coming years Tehran won’t be able to create a nuclear bomb, Vladimir Sazhin, expert on Middle Eastern affairs at the Institute for Oriental Studies of the Russian Academy of Sciences, told Sputnik.
“Yes, indeed, if the [Iranian] nuclear program was resumed in full (while the Joint Comprehensive Plan of Action (JCPOA) allows Tehran to enrich uranium up to 5 percent) the Iranians could have managed to produce 20 percent enriched uranium within a few weeks, which in any event couldn’t have become the basis for nuclear weapons,” Sazhin emphasized.
The expert referred to a remark made by Ali Akbar Salehi, the head of the Atomic Energy Organization of Iran (AEOI), concerning Iranian President Hassan Rouhani’s threat to abandon the nuclear deal in response to Washington’s ramping up of anti-Iranian sanctions.
“If we make the decision [to withdraw from the JCPOA], we would be able to resume the process of [uranium] 20 percent enrichment in five days,” Salehi told the state-owned broadcaster IRIB on August 22.
However, Sazhin expressed doubts about the possibility of Tehran unilaterally ripping the much-discussed nuclear deal up.
“Is it possible? To date, this is highly unlikely. And here is why: President Rouhani has always said that the protection of the JCPOA is and will be the top priority of his foreign policy. His political activity has been closely connected with the development, conclusion and implementation of the nuclear deal,” the Russian academic emphasized.
According to Sazhin, one shouldn’t be surprised by Rouhani’s promises to withdraw from the JCPOA in response to US sanctions since there are lots of influential forces within Iran that oppose the nuclear deal. The expert believes that the main addressee of the Iranian president’s tough rhetoric is the domestic audience.
The question then arises: Will Iran really benefit from exiting the JCPOA?
Hardly so, the expert says.
Sazhin pointed out that due to the partial lifting of the sanctions on the Islamic Republic of Iran, the Rouhani government has managed to achieve significant results.
“In 2013, [Iran’s] GDP fell by almost 6 percent per year, whereas in 2016 the country’s economy showed an increase of about 4-6 percent,” Sazhin said, adding that the fight against inflation also bore its fruit decreasing from an unofficial 40 percent to about 10 percent.
Furthermore, the conclusion of the Iranian nuclear deal two years ago ended Tehran’s isolation and opened the door to the country’s economic development. The expert stressed that over the past two years dozens of foreign leaders and businessmen have visited the country concluding billion-dollar deals.
“Iran’s refusal to fulfill the requirements of the nuclear deal would not only have dragged the country into an abyss of new sanctions and, accordingly, an economic crisis, but, perhaps, would have pushed it to the brink of war,” Sazhin surmised referring to the possibility of Israel’s use of force against Tehran.
However, there is more to the Iran nuclear deal issue than meets the eye, the academic noted.
“Perhaps, the anti-Iranian actions on part of [US] President [Donald] Trump and his supporters are precisely aimed at provoking Tehran to withdraw from the JCPOA,” the expert suggested, explaining that it would give Iran’s opponents “a legitimate reason to impose substantial sanctions — and perhaps not only sanctions — on Tehran.”
“Tehran sees this trap and understands what the consequences will be in case it falls into it,” Sazhin highlighted.
The expert noted that one should keep in mind that a large number of countries are highly interested in bolstering cooperation with Iran: Russia, China, EU member states, India, South Korea and the countries of Southeast Asia are demonstrating their willingness to strengthen ties with Tehran.
“Therefore, in the current situation, in case nothing extraordinary happens, Iran or the US’ exit from the JCPOA doesn’t appear probable,” Sazhin told Sputnik. “However, it is possible that the Americans will try to exert pressure on Iran by other means, not related to the JCPOA or the Iranian nuclear issue in general. But that’s another story.”
On July 14, 2015, China, France, Russia, the United Kingdom, the United States and Germany, officially referred to as the P5+1 group, concluded the JCPOA with Iran. The deal envisaged a gradual lifting of anti-Iran sanctions in exchange for Tehran’s guarantees that its nuclear program will remain peaceful in nature.
On August 3, 2017, US President Trump signed a bill on sanctions against Russia Iran, and North Korean into law. The new legislation, among other measures, imposes restrictions on Iran’s ballistic missile program and individuals who facilitate Tehran’s conventional military capabilities.

2 thoughts on “Anti-Iran Sanctions: 'US Tool to Provoke Tehran into Ripping Nuclear Deal Up'”