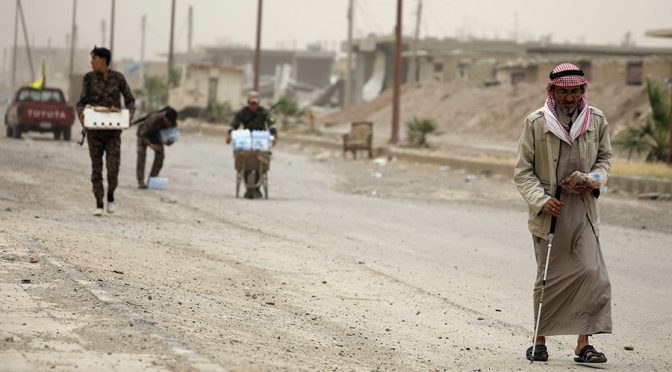 As gruesome as it may sound, an average of 27 residents are being killed in Raqqa each day, as US operations “against ISIS” are ongoing to capture the city of Raqqa for eventual Syrian partitioning. The same carnage happened in Mosul when the US led coalition recaptured the Iraqi city from its own terrorist proxy.
The battle to recapture the ISIS stronghold of Raqqa by the US-led Syrian Democratic Forces is costing the lives of 27 civilians a day, the UN estimates. And while the terrorists use residents as human shields, the US-led coalition often bombs escape routes.
“The UN estimates that an average of 27 people are being killed in Raqqa, every day,” Under-Secretary-General for Humanitarian Affairs and Emergency Relief Coordinator, Stephen O’Brien told the UN Security Council Wednesday. O’Brien noted that up to 25,000 civilians are still trapped in the Islamic State-besieged (IS, formerly ISIS/ISIL) city and are being slaughtered in the crossfire between the sides in the ongoing battle, the last phase of which began in June.
“They risk being killed, either by airstrikes, or by ISIL snipers or mines if they try to flee, or being used as human shields if they remain,” O’Brien noted, urging all sides of the conflict to spare civilian lives.
Also Wednesday, the UN Special Adviser on the Prevention of Genocide revealed that coalition forces are targeting boats on the Euphrates river which serve as escape routes for civilians, while ISIS fighters are killing anyone who tries to flee.
“I am deeply disturbed by reports coming out of Raqqa of the horrendous situation faced by civilians caught up in the offensive to retake the city from the so-called ISIL,”said special adviser Adama Dieng. “The legitimate aim of retaking Raqqa must not be achieved at such a high cost to civilians.”
Some of those civilians, who made it alive out of Raqqa, spoke to RT at the Ain Issa refugee camp north of the city.
“The aircraft shelled a lot. This happened in Mishleb, the downtown area, and around us. ISIS was slaughtering people and throwing them next to our houses,” one internally displaced woman told RT’s Ruptly video agency.
“The shelling is targeting the civilians, it is the aircraft, the coalition. It shells the civilians. Four-storey houses of people were all bombed over in our neighborhood. For sure many have died. One of them is my cousin, he died in Raqqa by an airplane,” another refugee said.
Some former Raqqa residents said coalition aircraft sometimes used white phosphorous in populated areas, and in one instance allegedly killed 17 people.

SDF militants, supported by the US-led coalition, launched the offensive in Raqqa province in November last year. In June, the fighting progressed towards the ISIS-besieged city, the de facto capital of the self-proclaimed terrorist caliphate.
An estimated 1,000 IS terrorists are still resisting some 15,000 SDF fighters for control of the city, Nowruz Ahmed, who sits on the military council of the US-backed ground force told Reuters earlier this week. She hopes the city will be liberated within the next two months. So far, according to Ahmed’s assessment, the SDF has captured around 60 percent of the city and has most of the IS terrorists encircled.

“We cannot determine the time period in which the battle of Raqqa will end precisely because war has its conditions. But we do not expect it to last long, and according to our plans the battle will not take longer than two months from now,” Ahmed said.
While SDF and the US-led coalition battle to recapture Raqqa, Syrian government forces, aided by Russian air power, are also making a push to help liberate the besieged city. In July, Syrian forces secured 4 humanitarian routes to deliver aid from Damascus, Homs and Aleppo and evacuated civilians from the city in an effort to spare them from the coalition’s bombardment and IS’ atrocities.
Facing increased pressure in Raqqa and elsewhere, IS terrorists have been trying to move its remaining forces along with tanks and other heavy weaponry to the Deir ez-Zor area. As a result of their desperate attempt to regroup, some 800 terrorists were killed and 13 tanks and 29 pickup trucks with mounted high-caliber guns were destroyed by Syrian troops and Russian aircraft near the town of Ghanem Ali, located in the eastern part of the Raqqa governorate south of the Euphrates.
The key Euphrates city of Deir ez-Zor has been under terrorist siege for two and a half years after being cut off from government-held areas, but now, the Syrian Army and allied forces are pushing toward the besieged city. Russian planes delivered 293 tons of food and medical supplies to Deir ez-Zor in August, according to Russian defense ministry. It has also upped the number of sorties against IS to 60-70 per day as the push for Deir ez-Zor gains momentum.