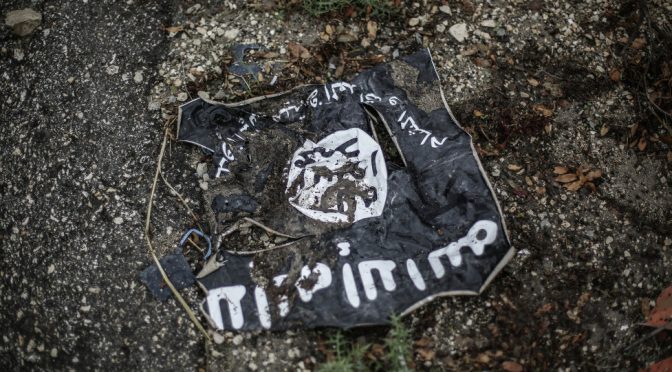 A serious working hypothesis is being discussed for a while now among independent geopolitical analysts. Here it is, in a nutshell.
by Pepe Escobar
Daesh may be dying – but the world is still encumbered with its walking corpse. Plan B of Daesh’s masters may have been to indoctrinate repeated waves of misguided youth across the EU and “seduce” them into D.I. Y. jihadi terror, creating fear and insecurity in Europe. I’ve just been to Barcelona — and that’s not happening. No Fear.
Daesh can also manipulate its brand name to stake a claim into what we may call the New War Belt in Southwest Asia. That’s also not happening, because the “4+1” – Russia, Syria, Iran, Iraq, plus Hezbollah – with the addition of Turkey, and with China in a “leading from behind” role, are all working together.
The unfinished war across “Syraq” coupled with spasms of jihadism in Europe could certainly still metastasize into a massive Eurasian cancer, spreading like a plague from Afghanistan to Germany and vice-versa, and from the South China Sea to Brussels via Pakistan and vice-versa.
What would happen under this cataclysmic scenario is the complete derailment of the Chinese-driven New Silk Roads, a.k.a. Belt and Road Initiative (BRI); its integration with the Russia-driven Eurasia Economic Union (EAEC); and a massive security threat to the domestic stability of the Russia-China strategic partnership, with uncontrollable bellicose scenarios developing very close to their borders.
It’s no secret which elements and institutions would very much cherish internal political chaos in both Russia and China.

Dr. Zbig “Grand Chessboard” Brzezinski may be dead, but geopolitics is still encumbered with his corpse. Brzezinski’s life obsession is that no peer competitor to the US should be allowed to emerge. Imagine as he lay dying contemplating the ongoing, ultimate nightmare; a Russia-China pan-Eurasian alliance.
The less disastrous scenario in this case would be to seduce either Moscow or Beijing into becoming a US partner, based on which one would pose a lesser “threat” in the future. Brzezinski focused on Russia as the immediate threat and China as the long game threat.
Thus the obsession of the US deep state and the Clinton machine in demonizing all things Russia – like an infantile neo-McCarthyism on steroids. Inevitably, what this geopolitical back hole has precipitated is China’s even more rapid advance on all fronts.
Not to mention that the Russia-China strategic partnership kept getting stronger every day – an eerie echo of Capt. Willard’s line in Coppola’s Apocalypse Now; “Every minute I stay in this room I get weaker, every minute Charlie squats in the bush, he gets stronger”.
And yet Charlie is not squatting; he’s conquering via trade and investment. And he’s not in the bush; he’s all over the Eurasian plains.

A basket of Hobbesian flare-ups

The other American dalang, Henry Kissinger, is still alive, at 94. Advising President Trump before the January inauguration, and posing as the supreme gray eminence on China matters, he suggested Russia should be courted.
But then came the clincher. Clearly identifying that the Russia-China-Iran alliance holds the key to Eurasia integration, Kissinger revealed his true colors; it’s the weakest link – Iran – that should be neutralized.
Thus his recent proclamation/warning about an “Iranian radical empire” developing/stretching from Tehran to Beirut as the “vacuum” left by Daesh is filled by the Persians.
And here we have Kissinger once again as the unreconstructed Cold Warrior that he is; exit Communism, enter Khomeinism as the supreme “evil.” And may the Lord bask in praise of the Wahhabi matrix of jihadism enablers; the House of Saud.
The Kissingerian recipe sounds like music to the US deep state; Daesh should not be routed, it should be “realigned” as a tool against Iran.
Who cares that the notion of an “Iranian radical empire” per se does not even qualify as a joke? Lebanon is multicultural. Syria will continue to be ruled by the secular Baath Party. Iraq rejects Khomeinism – with tremendously influential Ayatollah Sistani privileging the parliamentary system.
The “4+1” – backed by China — have forged a serious alliance in the fire of the Syrian war. None of this will change by a Kissinger decree. As for “filling the vacuum”, the alternative is Daesh and Jabhat al-Nusra, a.k.a. al-Qaeda in Syria. “But wait!” — say the neocons/neoliberalcons of the War Party. “We like that!”
And that brings us full circle to the initial working hypothesis. Daesh won’t be allowed to die – as much as the geopolitical re-engineering of what Dr. Zbig used to call the “Eurasian Balkans” refuses to die.
ISIS-Khorasan, or ISIS-K – that regroup in Afghanistan – can be so handy to wreak havoc in the intersection of Central Asia and South Asia, so close to key BRI development corridors.
Moscow and Beijing though, know exactly what’s goin’ on. The phony Caliphate was useful in an attempt to break off BRI across “Syraq”, as much as Maidan in Ukraine was useful to break off the EAEU. Other war fronts will follow – from the Philippines to Venezuela, all bent on disrupting regional integration projects under a Divide and Rule strategy of US satraps manipulated into Hobbesian asymmetrical flare-ups.
Sixteen years after 9/11, the name of the game is not GWOT (Global War on Terror) anymore; is how, under the cover of GWOT, to disturb geostrategic expansion by the people who matter; “peer competitors” Russia and China.

4 thoughts on “Why Jihadism Won’t Be Allowed to Die”