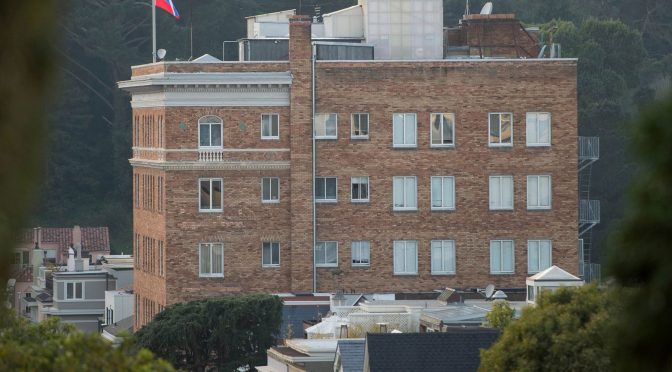 In spirit of parity, we require #Russia to close its consulate in SF, chancery annex in DC, and consular annex in NYC by Sep. 2. pic.twitter.com/8YeFncDO4l

Moscow said it considers the planned inspections “an aggressive action” which could also be used by US intelligence to “orchestrate an anti-Russian provocation by planting compromising items.”
“In a nutshell, we are witnessing such a vivid example of vandalism in the system of international relations, the raiding and seizure of Russian property abroad,” the head of the Russian trade mission in Washington, Alexander Stadnik, told RT’s Ruptly video agency.
“We certainly did not expect such uninvited guests and they were not welcomed,” Stadnik said, adding that their work continues.

Published time: 3 Sep, 2017 03:25
The shutting and subsequent searches of Russia’s diplomatic sites are a meaningless show of power and domination by the US, which, however, could help push through controversial new intelligence related legislation, believes Annie Machon, a former MI5 intelligence officer.
It is part of the efforts to push through the Intelligence Authorization Act that would recognize actors, such as WikiLeaks, as a “non-state hostile intelligence service,” Machon told RT.
RT: The State Department is saying the trade mission has been stripped of its immunity, that it was essentially lifted when that consulate was shut down. The Vienna Convention which governs consular relations says otherwise. Which do you think has got this right?
AM: The international law lays it down really clearly. The 1961 Vienna Convention on Diplomatic Relations says that any diplomatic and affiliated premises in a foreign country are inviolable. And any incursion on that territory is therefore seen as an attack on the country that is hosting that diplomatic mission.
So this is breaching all international law. And I have to say it seems very hypocritical because for example, going back to the Snowden disclosures of 2013, where it was disclosed that there were big illegal spying technical operations on the roof off, for example, the British embassy in Berlin, the American embassy in Berlin… Can you imagine the outcry if Germans then said: ‘We don’t want this in our country. We’re going to go raid these embassies and see what is going on inside them.’ I cannot imagine the international fallout. So why is that okay for America to do this to another sovereign state’s property in its own country?
RT: It seems a strange decision in a sense – I mean really, all you need to do is conduct an internet search… that this apparently goes against the Vienna Convention, and yet the US has gone ahead with this. Why do you think they are doing this?
AM: I don’t know, I really don’t know why they are trying to do this now. Well, obviously the tension has been ramping up. So Barack Obama in his last days as a president, at the end of last year, actually sent home 35 diplomats from Russia, which sort of confirmed in the public mind globally that Russia was involved in this bogus election hacking. And it just escalated from there.
So more sanctions being placed against Russia at the beginning of August. Russia was retaliating by expelling more American diplomats and their associates. So it is just escalating from this point.
Why they are doing it now, I do not know. It seems that President Trump initially wanted to try and recalibrate the relations with Russia to try to build a peaceful and a profitable world for both nations. And he has been hedged in, hedged in, hedged in, ever since his election by an American establishment plot to try and stop him, to make sure he can’t do that.
RT: Why conduct a search of the premises? Is it just a pantomime, a kind of theatre?

AM: I think there is a certain degree of theatre always in these sort of acts but also what is particularly concerning to me is that there is a Senate Intelligence Authorization Act going through the corridors of power in America. It was announced in the middle of August and this will actually effectively attack intelligence agencies working in America and even non-state hostile intelligence agencies, as they are calling WikiLeaks for example.
Now we all know that Julian Assange has had a safe haven in the Ecuadorian embassy in London since 2012. We also know that in 2012, the UK government was looking at the idea that they might try and raid the embassy against all international law, again to try to get him out to try to get him extradited.
So I’m wondering if this might be linked? There is some sort of meaningless parade of power by raiding these consulates in America, Russian consulates in America. Because they are going to push through this new law and then they can use it globally against anyone else they perceived to be an enemy. And we know that Julian Assange and WikiLeaks are perceived to be an American enemy. And they want him back there, and they want to persecute him under some secret laws.
RT: And this deadline to vacate the premises, it is really short notice, isn’t it? We saw that the Russian gave the US a whole month to clear out. Do you think the US is trying to set a precedent to let foreign nations know – don’t get too comfortable, we could ask you to get out at any moment?
AM: Absolutely. We have had a situation since the end WWII where there’s been a sort of detente with diplomatic relations, where people have assumed that there are certain rules in play, and it has been quite civilized. And it appears now increasingly on all sort of fronts, not just diplomatic fronts but you know on internet fronts, corporate fronts, whatever, that America keeps trying to claim global dominion.
And I think they are trying to assert that in this case – the question is why and why now? And I think it might be linked to this Senate Intelligence Authorization Act that is going through at the moment that is not being much reported on in America.

By this action, the Deep State has scored against the Russians through the inability of the Trump administration to pursue its own foreign policies and allowing itself to be at the mercy of the US Congress.
In short, the US presidency is nothing but an illusory entity aimed at projecting a semblance of democracy, but has proven itself only to be incapable of instituting real and much needed reforms that the people hoped for in every administrative term. The culture of war is still very much in place, and Trump can do nothing to prevent it.
“Mr. Trump was seen as having little choice, given the congressional investigations into possible collusion between his campaign and the Kremlin, as well as the whopping majorities in the Republican-controlled House and Senate that voted to pass the measure,” the New York Times admits.
As far as the Deep State is concerned, the formula is to provoke the enemy to react and use that reaction as the pretext for its own primary goal, in this case, the obstruction of the highly anticipated US-Russia rapprochement under the Trump administration.
Proof of that is how conveniently the mainstream media ignores the prior US Congress imposition of sanctions against Russia in all their articles pertaining to the precurosrs of the above diplomatic raid.
A US-Russia cooperation would have led to the crafting of global policies that would end all wars of aggression and be more focused on the global economy.
In the last few years, the Deep State attacks against the Russians went beyond mere diplomatic propaganda.

Beyond all of that, this gives the authorities another pretext to raid everyone’s home.