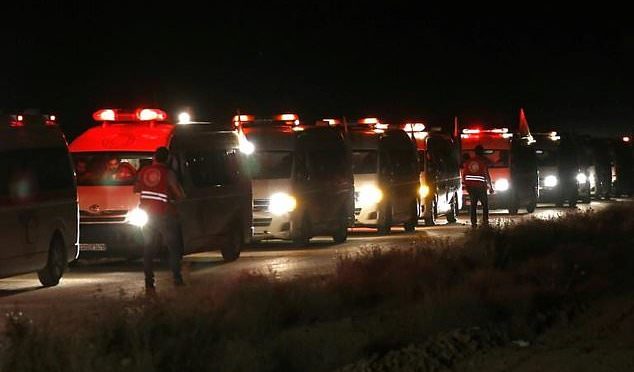 After approving the sendoff of hundreds of Toyota pickups into Syria for the exclusive use of its trained and funded “moderate rebels” to oust the Assad government back in 2013, the US chickenhawks are now ignoring the plea of the defeated terrorists, who are stranded in 17 buses, because Iraq refuses to accept them on its borders.
The leaderless band of terrorists and their families have nowhere else to go since Abu Bkr Al Baghdadi supposedly died in one of the Russian air raids on the terrorist headquarter South of Raqqa City , more than 2 months ago.

Such is the fate when working with two-faced Deep State stooges like John McCain, or Victoria Nuland.
The sad part for the terror proxies is not just that they were abandoned for their unsuccessful operations in Syria, they were even bombed by US jets as they fled from the Lebanese border, as part of the ceasefire agreement reached through the Russian mediation and to which the US did not agree to in order the escape from post war responsibilities.
The deal involved 17 buses and 11 ambulances, with 308 fighters and 330 family members traversing 350 km. of Syrian regime territory to get to ISIS-held areas along the Euphrates valley.
In short, the US chickenhawks are now taking evasive maneuvers away from their culpability in the failed attempt to topple a legitimate Syrian government.

The US-led coalition carried out an air strike today to block ISIS militants evacuated from Lebanon from reaching eastern Syria, the group’s spokesman confirmed.
Hundreds of ISIS fighters and civilians were evacuated Monday from the border region between Lebanon and Syria under a controversial ceasefire agreement and were headed to a town near Syria’s eastern frontier with Iraq controlled by ISIS.
‘To prevent the convoy from moving further east, we cratered the road and destroyed a small bridge,’ said coalition spokesman Colonel Ryan Dillon, without providing further details on the exact location.

It would not come as a surprise also if the US Deep State Department and mainstream media would claim credit to the defeat of these CIA terrorists, as the Russians, together with the now upgraded Syrian military, are finished with their mopping up operations against Daesh.
At present, they are content with “proving the Assad government’s complicity with the terrorists” who sought its own ouster, by allowing the latter’s convoy to pass through its soil.
According to the Jerusalem Post,

So why isn’t the Syrian government listed as a party to the agreement? Because the Syrian government has been selling itself as “fighting ISIS and al-Qaida” to western media, pretending it is on the same side against terrorism. If Syrian President Bashar Assad was seen to be allowing ISIS members to transit his territory to go fight in Iraq against the US or against Iranian-backed Shi’ite militias, the regime’s narrative would be challenged.
However, the reality is that 17 buses did drive through dozens of Syrian regime checkpoints, escorted by Hezbollah. Hezbollah in this story plays the “bad cop,” escorting ISIS, while the Lebanese government and Syrian regime are the “good cop,” turning a blind eye.
In remarks reported by the NYT, Lt.-Gen. Stephen J. Townsend, US coalition commander, said the coalition had “struck every ISIS fighter and/ or vehicle that has tried to approach that convoy and will continue to do that.” The coalition wrote in a statement on Sunday that 85 ISIS fighters and 40 vehicles had been struck by September 3.

It was the Lebanese Hezbollah leadership, of course, which asked for Assad’s permission to allow the busing of the terrorists through Syria and into the Iraqi border, so that the Deep State chickenhawks could reassign their bearded assets to Southeast Asia, or any other places of their choosing.
Admitting embarrassment, Syrian President Assad could not refuse the Lebanese people, along with the Russians and Iranians, who helped him preserve the integrity of the Syrian republic.