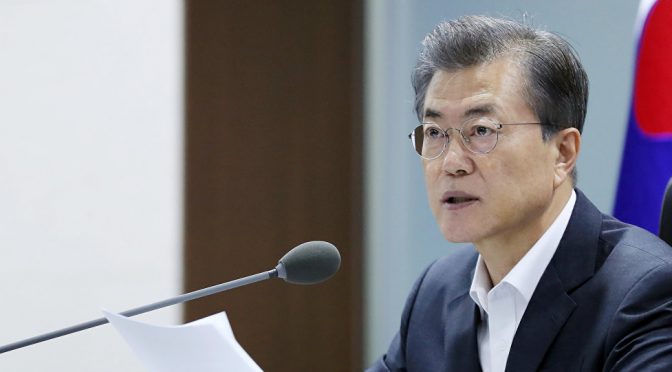 The South Korean President Moon Jae-in revealed his true color by threatening the North Koreans with “destruction beyond recovery,” in conjunction with allowing joint military drills with the United States. This latest statement will surely not bode well with the North Koreans especially with the latest UN sanctions against them.

“Dialogue is impossible in a situation like this,” the South’s president was quoted as saying at the National Security Council meeting by the Yonhap news agency.
“In case North Korea undertakes provocations against us or our ally, we have the power to destroy (the North) and make it unable to recover,” Moon added.

It is very clear by now that president Moon is incapable of resisting the diktat of the US military to:

The North Koreans conducted the latest missile test in response to the latest UN sanctions authored by the US.
These people have long memory for what the West did in the middle of the last century, and earlier. The people of Japan and the two Koreas understand that they are being pitted against one another, and this has something to do with a grand plan to eliminate non-Catholics.
Without external interventions as to the political affairs of the South Koreans, the Korean Peninsula would have achieved peace a long time ago. In fact, the Korean conflict would never have happened in the first place.
The bigger picture involves their having no affiliation to the Vatican doctrines. The Jesuits are aiming since its inception for one world religion to unite us all, with them at the top of the totem pole. All non-Catholics must be converted, or eliminated.
The problem for the Jesuits is that more and more people, even in the United States are converting to Buddhism. So, in order to reach their ultimate objective, they must divide and conquer the Asians first.

“True to form, having assassinated another enemy in obedience to its wicked laws, the Sons of Loyola put the young Emperor Meiji on the throne. Inexperienced and intimidated through the murder of his father, he became a most willing tool of the Order’s advisors for over forty years, from 1868 to 1912. In 1873 the “Christianity Ban” was lifted, allowing all “Christian” sects open public worship in Japan, which included not only the Jesuits but the true Bible-believing, gospel missionaries of the Lord Jesus Christ eternally saving many of the LORD’s Japanese elect during the 1880s according to Protestant missionary Winburn T. Thomas in his 1959 treatise, Protestant Beginnings In Japan: The First Three Decades, 1859-1889!
In 1874 Buddhism, the Company’s old enemy, was legally disenfranchised, the Emperor no longer protecting or providing for the former state religion. In 1889 all power was centralized in the monarchy via a new, unprecedented “Constitution” that would even cause King Charles I to blush, enthroning Emperor Meiji as the most absolutist military dictator in the Far East! Amassing a fortune via the proceeds of three industrial monopolies, cartel-capitalist Meiji began his military conquests for the (Jesuit) Order in 1894, inciting revolution in Korea and sinking the Chinese Navy; in 1904 he ordered a surprise attack on the fleet of Nicholas II, destroying the Russian navy.”
– Eric Jon Phelps’ Vatican Assassins:

In short, the members of the Eastern Alliance does have a common enemy, and it’s only wise that Putin has assured everyone that there won’t be any war in the Korean Peninsula.
Our earlier information is that both the Russians and the Chinese military have sent patrol ships to monitor and disarm any North Korean missiles in mid-flight, when need be.