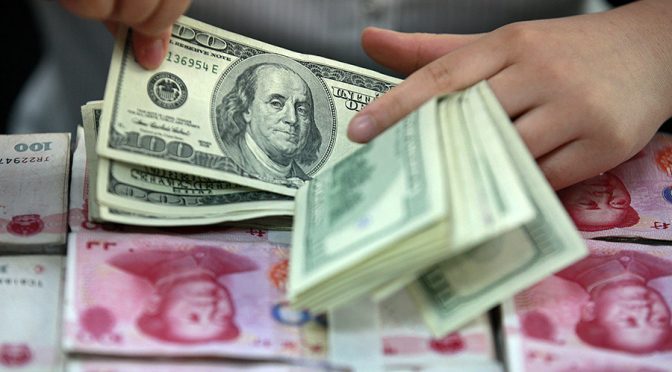 Donald Trump was reported to have halted the Chinese purchase of a US chipmaker last week. This is, of course, in line with his America First campaign speech. But there is also a grand plan to start a “mini nuke war” with North Korea, if only that is even possible.
The ultimate objective, of course, is China.
The problem with all of these ideas is that the US today is evidently in no position to make such a threat, financially and militarily.

16 Sep, 2017 14:08
If the Trump administration puts sanctions on China, this would hurt America more because it just forces China and Russia and other countries to cooperate, says investor and financial commentator Jim Rogers.

US Treasury Secretary Steven Mnuchin warned on Tuesday that the US could impose economic sanctions on China if it does not implement the new sanctions regime against North Korea, saying that the restrictions could involve cutting off Beijing’s access to the US financial system.
“If China doesn’t follow these sanctions, we will put additional sanctions on them and prevent them from accessing the US and international dollar system, and that’s quite meaningful,” Mnuchin said at the Delivering Alpha Conference in New York City.
The UN Security Council unanimously approved a resolution banning North Korea’s textile exports and capping its oil imports following Pyongyang’s sixth nuclear test conducted last week.
RT spoke to famous investor, author, and financial commentator Jim Rogers to discuss global perspectives in the case of the US imposing sanctions on China.
RT: What is the likelihood that the US will go through with and actually impose economic sanctions on China if it does not implement the new sanctions regime against North Korea?
Jim Rogers: Sanctions are sanctions. They could do sanctions which are not very important or don’t do much damage. And then they will have good public relations which says they have sanctions, but it is meaningless. I would suspect if anything, that is what they will start with. If they put sanctions on China in a big way, it brings the whole world economy down. And in the end, it hurts America more than it hurts China because it just forces China and Russia and other countries closer together.
Russia and China and other countries are already trying to come up with a new financial system. If America puts sanctions on them, they would have to do it that much faster and in the end America will lose its monopoly on the financial system, which will hurt America more than anybody.
RT: What do you think, is it an empty rhetoric and saber-rattling from Donald Trump because he said “those [UN] sanctions are nothing compared to what ultimately will have to happen” without specifying what he meant by that. Do you think this is just mere bluff on the part of the US, or would it really use the ‘nuclear option’?
JR: If it uses a nuclear option for sanctions, it will hurt America much more than will hurt North Korea, it will hurt America much more than it will hurt China, Russia and everybody else. It will force the rest of the world to find an alternative to the US financial system. If he does that, it is going to cause a lot of turmoil in the world financial economy and in the end it is going to hurt America more than it is going to hurt anybody else.
I would give you an example, if you look at Russian agriculture right now – America put sanctions on Russian agriculture trying to hurt Russia, but it has helped Russian agriculture. Russian agriculture is booming now. In the end, America has hurt itself more than it has hurt anybody else.
RT: If that happens, what would the consequences be for the global economy? Could this end up becoming a global economic crisis?
JR: We are probably going to have a global economic problem, maybe even crisis, in the next couple of years. This may be one of the things that start it. There is always something which starts a crisis. If America does something like this, this could be the thing that did it. In 1929, it started when America started a huge trade war with the rest of the world and the economists said, “please, this is a mistake,” but America did that anyway. And then we had a great collapse and The Great Depression of the 1930s.
RT: Washington runs a $350 billion annual trade deficit with Beijing. China also holds more than $1 trillion in US debt. How could the US actually threaten China in such circumstances?
JR: Mr. Trump has been saying for over a year, two years that he was going to start a trade war with China. He was going to put very high tariffs on Chinese goods. In his mind, he wants to do it, he is ready to do it. Some of his advisors are very much in favor of a trade war. It may very well happen. If it happens, it is going to be very bad for the world and it is going to be worse for America than for other people.
RT: How significant is Chinese trade with North Korea?
JR: For North Korea, it is extremely important – that is really the only trade partner. They don’t trade with many people except China. But it is not very important for China. China has got gigantic trade all over the world and North Korea is a very small economy.
RT: What impact will this have on North Korea itself? From an economic perspective, would they be able to keep up their military development under harsh sanctions regime?
JR: If China actually cuts off their oil or something, no, then North Korea cannot do much of anything. North Korea would have troubles surviving if they do something like that. It depends on the sanctions, so far China has not done anything which would destroy North Korea. But they could destroy North Korea if they cut off all trade.
Tatiana Klimova, RT

The bombing of Pearl Harbor by the Japanese was predicated by an aggressive US sanctions against Japan. The same script continues to be recycled.
Until today, nobody knows exactly the real military capability of the Chinese. But judging from what they are showing between annual victory parades, they do have the technology and appetite to win a war.
Then there’s Russia, SCO, Iran and Latin America.
But starting a war with just about anybody is always the best way out for a bankrupt enterprise. The Khazarian Mafia is the foremost authority in that regard.