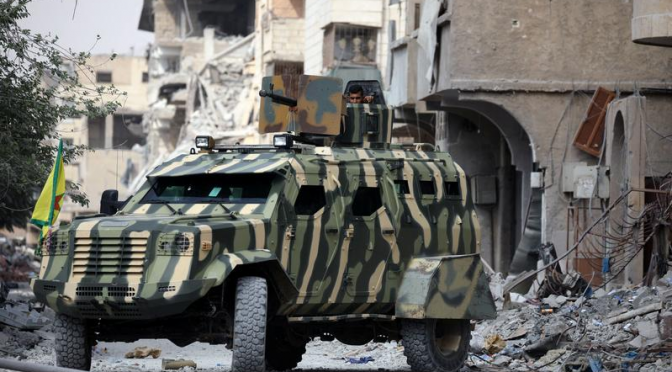 The United States’ highly illegal operations in Syria has caused the delay of freeing civilians trapped in the remaining ISIS occupied territories in the country.
After the combined forces of the Syrian Army and Russian special forces are targeted by the terrorists recently, a Russian general held a meeting with his US counterpart purposely to warn the latter of the grave consequences should its operations be hampered again.
American commandos are embedded with the so called “Syrian Democratic Forces.”
MOSCOW/WASHINGTON (Reuters) – Russia warned the United States on Thursday it would target U.S.-backed militias in Syria if Russian troops again came under fire, as the United States disclosed an unusual face-to-face meeting between U.S. and Russian generals meant to avoid such clashes.
The Russian warning underscored growing tensions over Syria between Moscow and Washington. While both oppose Islamic State (IS), they are engaged, via proxies, in a race for strategic influence and potential resources in the form of oilfields in eastern Syria’s Deir al-Zor province.
The Russian Defence Ministry said the U.S.-backed Syrian Democratic Forces (SDF) had taken up positions on the eastern banks of the Euphrates with U.S. special forces, and twice had opened fire with mortars and artillery on Syrian troops who were working alongside Russian special forces.
“A representative of the U.S. military command in Al Udeid (the U.S. operations center in Qatar) was told in no uncertain terms that any attempts to open fire from areas where SDF fighters are located would be quickly shut down,” Major-General Igor Konashenkov said in a statement.
“Fire points in those areas will be immediately suppressed with all military means.”
In a sign of the high stakes as both forces come in increasing proximity, U.S. and Russian generals held a face-to-face meeting this week in an effort to avoid accidental clashes, U.S. military officials said on Thursday.
“They had a face-to-face discussion, laid down maps and graphics,” said Army Colonel Ryan Dillon, a Baghdad-based spokesman for the U.S.-led coalition, adding it appeared to be the first meeting of its kind.
Dillon, addressing a Pentagon briefing, disclosed few details, including who participated in the meeting or its precise location.
A U.S. military official, speaking on condition of anonymity, said the participants included both U.S. and Russian generals.
U.S. SPIES?
The Russian Defence Ministry this week accused U.S. spies of initiating a jihadi offensive against government-held parts of northwest Syria on Tuesday.
The ministry, in a Wednesday evening statement, said 29 Russian military policemen had been surrounded by jihadis as a result and that Russia had been forced to break them out in a special operation backed by air power.
“According to our information, U.S. intelligence services initiated the offensive to halt the successful advance of government troops to the east of Deir al-Zor,” said Colonel-General Sergei Rudskoi.
The Syrian army, backed by Russian war planes, has captured about 100 km (62 miles) of the west bank of the Euphrates this month, reaching the Raqqa provincial border on Wednesday, the Syrian Observatory for Human Rights reported.
Syrian troops also crossed to the eastern side of the river on Monday where the SDF, an alliance of Kurdish and Arab militias fighting with the U.S.-led coalition, has been advancing.
The convergence of the rival offensives has increased tensions in Deir al-Zor.
The U.S.-backed militias said on Saturday they had come under attack from Russian jets and Syrian government forces, something Moscow denied.
On Monday, the SDF warned against any further Syrian army advances on the eastern riverbank, and Russia’s Defence Ministry said on Tuesday that the waters of the Euphrates had risen as soon as the Syrian army began crossing it, suggesting this could only have happened if upstream dams held by the U.S.-backed opposition had been opened.
Andrew Osborn, Phil Stewart

10 thoughts on “Russia will target U.S.-backed fighters in Syria if provoked”