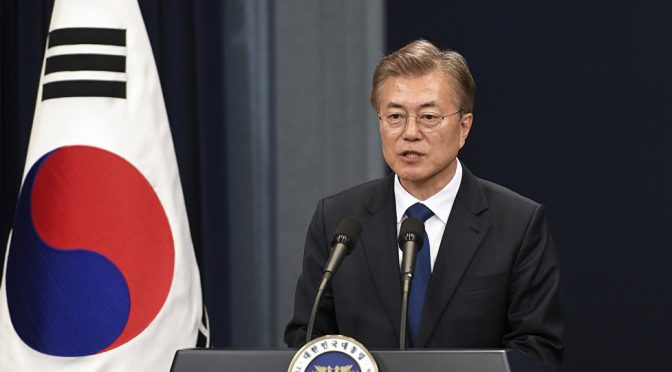 The constant exchange of war rhetoric between the US and North Korea is working for the US military industrial complex. South Korea has decided to build its own nuclear submarine fleet and a network of spy satellites.
South Korea is considering boosting its three-axis defense program by building its own nuclear-powered submarines and acquiring spy satellites to counter the North Korea threat.
At their second bilateral meeting on Thursday, US President Donald Trump and South Korean President Moon Jae-in committed to strengthen their combined defense posture against the People’s Democratic Republic of Korea (DPRK)  through Seoul’s acquisition and development of highly-advanced military assets, as well as through the deployment of US strategic assets in and around South Korea.
Following the meeting, Trump said it was “a great privilege” to talk to Moon and that the ongoing North Korean crisis was the most important issue he and his counterpart had to address.
“I am allowing Japan and South Korea to buy a substantially increased amount of highly sophisticated military equipment from the United States,” Trump tweeted on September 5, after Pyongyang successfully tested a hydrogen bomb that could be loaded on an intercontinental ballistic missile.

As everyone knows, North Korea is predictable when it comes to how it would respond to any Western provocation. This has been exploited by the war hawks under the employment of the military industrialists controlling Washington DC.
So, even if the Trump administration is looking more stupid all the time, it is more than willing to do the provocation as it is the only it can survive the four year term, and to mitigate the impact of the undisclosed bankruptcy of the US, Inc.
When asked about the US bombers fly by near the Korean Peninsula and along international waters, Patrick Henningsen has this to say:
They are sending a message of aggression and war. It is certainly the message that Trump’s base, some of them anyway, want to hear. It is the message that the military-industrial complex in the US – all the defense contractors – they want to hear this, it is John McCain’s message, it is James Mattis’ message. This is the message of neoconservative war hawks. That is basically who he is talking to.
In terms of diplomacy, it is completely counterproductive. In terms of China relations, it is very poor form. In terms of military strategy, it is worthless, it is nothing. The other thing is, Obama would have done the same thing. In fact, Obama did exactly the same thing in September, 2016 – he flew a B-1 bomber over South Korea not very far at all, technically from where this was flown today. Of course, it didn’t get any media coverage at the time. But this is just basic US behavior, a government that is dominated by the Pentagon, by the defense industry, by these interests.
In short, this is all theatrics that has the potential of going full thermonuclear when miscalculations occur. Otherwise, the Korean Peninsula should have achieved peace a lot time ago.
The US is the problem in this. South Korea and North Korea have tried different times to initiate some kind of meaningful peace process. And almost at every turn, the US will intervene in one way or another to try to break up that sort of bilateral negotiations between the North and the South. The US has a demilitarized zone between North and South Korea with 30,000 troops and military contractors and civilian personnel based there. They have a base in Okinawa, they have a base in Japan, they have a base in Guam, they have a few bases on the Philippines.
From the Korean point of view, the problem is the US. I am sure North and South Korea could eventually work this out to have a peace treaty. But that is not what is happening now. The US is intervening for one simple fact: because the whole Pacific Rim agenda is predicated on poor relations with North Korea and war footing. Otherwise, the US would have no business in the Pacific and the only reason they are there is to counter China. So, North Korea is just theater. This is stage-managed geopolitical theater. It is very dangerous what the US is doing right now, what this president is doing right now, pushing the envelope in a very negative way.

What the Khazarians have been doing is at least two-fold:

They’re aiming that, in the end, they’re the only ones left standing.