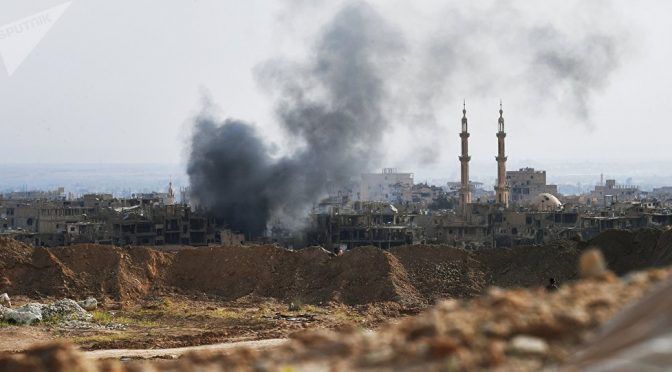 Although both countries only acknowledged their participation in the ongoing conflict in Syria to mere advisory, in the area near the oilfields of Deir Ezzor, a direct confrontation has occurred in recent days resulting to the deaths of three high-ranking Russian personnel.
The US denied the allegation,

US State Department spokesperson Heather Nauert states that accusations of the US complicity in the death of the Russian general in Deir ez-Zor are false.
WASHINGTON (Sputnik) — Claims that the United States supported or was complicit in the death Russian Lt. Gen. Valery Asapov in Syria are completely false, US Department of State spokesperson Heather Nauert said in a statement on Monday.
Nauert also stated that accusations that the US supports Daesh are groundless as the only aim is to defeat terrorists.
Russian Deputy Foreign Minister Sergei Ryabkov said that the death of the Russian general in Syria was the price that Russia paid for the duplicity of the United States’ stance in the Syrian crisis.
Nauert in turn stressed that the United States will continue to de-conflict operations with Russia, and recent statements made by the Russian officials are “untrue and unhelpful.”
On Sunday, the Russian Defense Ministry reported that Lt. Gen. Valery Asapov, who headed a group of Russian military advisers, was killed near the city of Deir ez-Zor during a mortar attack by terrorists from Daesh (banned in Russia).
The Defense Ministry earlier released aerial images of Daesh deployment sites north of Syria’s Deir ez-Zor, where US equipment and special operations are clearly visible but without any “evidence of assault, struggle or any US-led coalition airstrikes to drive out the militants.”

In spite of these losses, the Russian forces continue to forge ahead, together with their local Syrian Army counterparts.
After releasing satellite images confirming the undeniable collusion between Al Qaeda and US forces, the Russian-led coalition builds a bridge across the Euphrates River for transporting additional military hardware and humanitarian aid for trapped civilians.


To hamper the work, the US-allied terrorists control Tabqa Dam discharged large volumes of water to raise the level and increase the current. These are signs that the puppetmasters are desperate and willing to inflict as much destruction to people who never had anything to do with their own financial bankruptcy.
A week ago, the al Qaeda faction launched the most decisive attack on the advancing Syrian Army in Hama, near Idlib. However, the terrorists were forced to retreat by the Russian Aerospace Forces, and lost significant grounds.

In the area of Deir Ezzor, the oilfields there are still under the control of the Islamic State, but the US forces have never lifted a finger against the terrorists, choosing instead to fight against the Russian-led coalition.
This is proof enough that, not only did the CIA was behind and are allied with the head choppers from the very beginning, but is still aiming for the eventual partition of Syria, a scenario that the Russian-led coalition is not amenable of.
.

4 thoughts on “US & Russia are Directly at War in Syria”