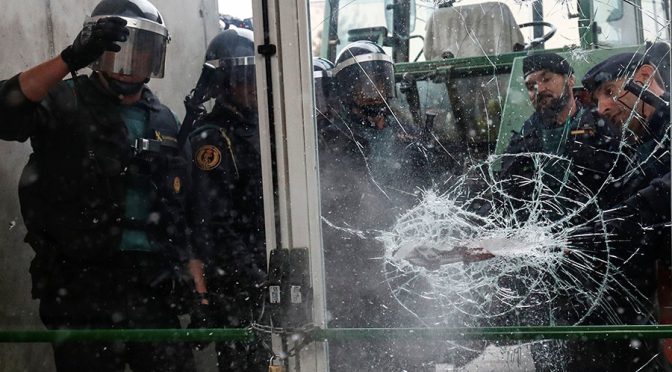 The European Union cockroaches were quick on condemning strong leaderships running after terrorists and drug trafficking, yet mum on the daylight police brutality of the Spanish government against the legitimate exercise of political power by the Catalans.

By Richard Sudan
Over the last few days, tens of thousands of Catalans have mobilized en-masse to take part in a referendum on the future of Catalonia.
Whatever your opinion on the question of Catalonian independence, there can be no doubt the response from the Spanish government has been heavy-handed and excessive.
The Spanish government claimed the referendum, which looks likely to return a resounding ‘yes’ vote and may well have done so by the time you read these words, is illegal.
Indeed, the government has claimed the referendum on independence violates the Spanish constitution. Now, even if one assumes that legality, is a sufficient means to measure right or wrong, illegality, or breaking the law, cannot in itself provide a justification for unprovoked physical violence.
And unprovoked violence is what was seen on the streets of Barcelona and beyond on Sunday.
Video and images of the police beating activists, and those attempting to cast a vote flooded social media as voting began in Barcelona in the early hours of Sunday morning.
I witnessed for myself police trying to control the flood of people entering one polling station in Barcelona, only to fail due to the sheer numbers of those present. A number of videos showed police entering separate polling stations and seizing ballot boxes full of votes that had been cast. Were it not for the large amounts of people occupying the polling station where I spent the afternoon, I believe the same thing would have happened there too.
And this brings us to the crux of the matter: Spain, or any other country, cannot claim for itself the status of ‘a democracy,’ while repressing the fundamental democratic freedoms of its people, in this case, the Catalans. Personally, the situation brings to mind the plight of the Palestinians, who are routinely attacked by the Israeli state while Israel harps on about being a democracy. Hypocrisy of the highest order.
Now, we’ve all the seen the images of the Spanish police beating Catalans, shutting down polling booths, and seizing ballot boxes. What I didn’t see, however, and which is a stark paradox in my mind, were gatherings of neo-Nazi nationalists who were openly doing Nazi salutes in Catalonia Square being challenged with the same vigor, by the very same police who were attacking the polling booths. Why? How can this possibly make any sense?
How can the Spanish police justify their crackdown on voters while allowing neo-nationalists to make open Nazi salutes and parade in Barcelona unchallenged? Are the Spanish authorities really more afraid of the ballot box than neo-Nazis?
The only thing worse than this violence and hypocrisy is the deafening silence from other European and world leaders. The EU as a bloc has failed to take a formal stand against the brutalization of the Catalan people, who are, after all, citizens of the EU. Now, I’m not a fan of the neo-liberal economic program that underpins the EU, and I’m even less of a fan of the ‘leave’ campaign in Britain.
But it cannot be right, that the leadership of the EU is silent on this issue of Catalonia when it is so willing to criticize human rights abuses elsewhere.
If the treatment of the Catalan people had taken place in the Middle East or Africa, the EU and other Europeans leaders would have been quick off the mark to condemn it. There may have even been calls for no-fly zones or intervention.
Or just imagine if the Catalan people had suffered such harsh treatment in Russia? You can almost hear the hypocritical voices aiming their vitriol at Moscow.
To be fair, a handful of leaders including Jeremy Corbyn have condemned the violent treatment of the Catalan people, albeit in a lukewarm fashion given their significant platform. But the Spanish government should hang its head in shame. And so too should its apologists.
During my time in Spain this week, I’ve heard many people forward the argument that because parts of Catalonia are affluent, that somehow makes their case for independence illegitimate. But the right of individuals to determine their own future can never be illegitimate.
And in any case, ironically, the violence of the Spanish state, and the silence of other so-called leaders may have ultimately worked for the Catalan people. The unjust violence toward them is painfully obvious to anyone with eyes to see it.
The silence of other so-called democracies over this issue, in condemning the violence, is deafening.
The willingness of Brussels to highlight human rights abuses in so many non-European countries, while staying silent on Catalonia, is glaring.
Other nations, including the Spanish government, cannot tout words like ‘legality’ and ‘democracy’ while allowing the repression and brutalization of the Catalan people. And the harsh repression of the Catalan people – from the arrest of activists and politicians to the removal of pro-referendum websites – is all I have seen take place over the last few days in Barcelona.

Meanwhile, the Las Vegas shooting, which claimed 58 lives and 515 injured, is being blamed on “a 64-year-old retiree from Mesquite, Nevada, had as many as 10 guns with him, including rifles,” reports said.
A hand grenade would have inflicted the same casualties, if that the was the intention.
Again, the targets are civilians and not erring government officials, which means that the action is meant to sow terror and fear upon the public, and not a legitimate expression of social frustration.
We are suspecting that there could be more than one shooter, and the old man was just a fall guy. Here’s why:

The shooter appeared to fire unhindered for more than 10 minutes as Las Vegas police frantically tried to locate the man in one of the Mandalay Bay hotel towers, according to radio traffic. For several minutes, officers could not tell whether the automatic fire was coming from Mandalay Bay or the neighboring Luxor hotel.