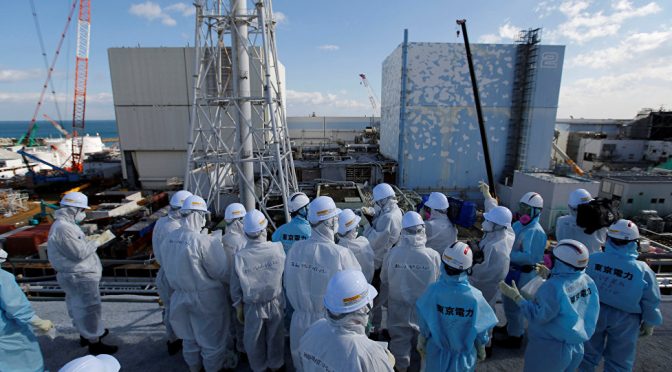 Nuclear power is making a debut in Saudi Arabia as it is entertaining bids for building 16 nuclear reactors over the next decade, at a projected cost of $60 billion. As everyone knows already, the fiat dollar derives its perceived value from the fact that OPEC cartel members, including Saudi Arabia, committed themselves to accepting only the dollar and nothing else.
Saudi Arabia’s systematic divestment into nuclear power, therefore, will deal the final blow to the fiat currency of the Deep State. The fearmongering against nuclear power, through false NGOs like the Deep State funded Greenpeace, is not working.
“The nuclear power industry took an enormous blow after the 2011 Fukushima Daiichi disaster which forced the relocation of 100,000 people in Japan. Not only did this increase regulatory scrutiny on the nuclear power industry, it galvanized public opinion against them. However, Saudi Arabia has no considerable anti-nuclear movement, and is one of the world’s largest economies to not have any nuclear power plants.”

Nuclear power has matured long enough that safety mechanism through fission-fusion hybridization is already built into the system itself. This means that any radioactivity during its nuclear fission operation is irradiated in real time through nuclear fusion, thereby doubling up its overall efficiency as no energy is wasted between the two opposing processes.
“This would make it the second Arab country to explore the use of nuclear energy, the first being the United Arab Emirates (UAE.) After multiple stumbling blocks and delays, the first of the nation’s four reactors is to come online in 2018.
Riyadh’s goal is to build 17.6 gigawatts of nuclear energy capacity by 2032, according to the website of the King Abdullah City for Atomic and Renewable Energy (KACARE). As Saudi Arabia has no nuclear industry, they will have to hire a foreign contractor.
Companies such as French reactor builder Areva, the Beijing-owned China National Nuclear Corporation and the Moscow-owned Rosatom have all approached KACARE about building Saudi Arabia’s first nuclear reactors in the past.
… Oil is the keystone of the Saudi economy, constituting 55 percent of the nation’s GDP- but oil reserves won’t last forever, and neither will the world’s demand for it.
Understanding this, the House of Saud began a diversification campaign in 2016 that sought to hextuple Saudi Arabia’s non-oil economic sector in size and grow the private sector from 40 to 65 percent of the economy by 2030. “
In line with this, both Saudi and Russia is establishing a $1 billion energy fund…
A joint Russian-Saudi fund to invest in the energy sector will be announced during the forthcoming visit of the kingdom’s monarch Salman bin Abdulaziz Al Saud to Moscow, Russian Energy Minister Alexander Novak told the Al Arabiya TV Channel.
According to Novak, the basic agreement to establish the $1 billion fund has already been reached.
Novak said Russia is “focused on developing cooperation with Saudi Arabia not only within the OPEC framework but also outside the cartel,” including the energy sector, the electric power sector, and renewable energy resources.
The Saudi King is expected in Moscow early next month and will become the kingdom’s first monarch to visit Russia in the almost a hundred years since the two countries established relations.

Indeed, the global reset for the Big Energy sector is one of the slowest to materialize, next only to religion.
Of course, Saudi Arabia is yet to answer from all its genocidal operations in Yemen, as coerced by UK-US military industrial complex.