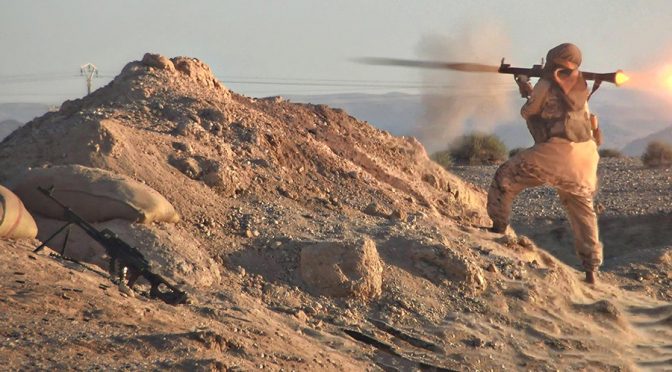 The US led coalition has established a base camp near the border town of Al-Tanf purportedly to facilitate its operations against ISIS. What is happening now is exactly the opposite, i.e. just outside the base perimeter is where ISIS militants are launching their attacks on the Syrian Army.
The 100km area around the US Al-Tanf base near the Syrian-Jordanian border has become a “black hole” which ISIS terrorists use to carry out attacks against Syrian troops and civilians, the Russian Defense Ministry said.
The base, set up by the US in April 2017 near the border town of Al-Tanf, is becoming a problem for Syrian troops combatting Islamic State (IS, formerly ISIS/ISIL) terrorists in Deir ez-Zor province, the statement says.
“Unlawful establishment by the US of this military base on Syria-Jordan border in April this year has been publicly justified by ‘the need to conduct operations against IS,’” the statement reads.
However, “there were no reports of a single American operation against Islamic State during the six months of its existence,” The Russian Defense Ministry said.
“Though the Pentagon repeatedly claimed that the base is used to train the so-called ‘New Syrian Army’ by the coalition instructors from the US, the UK and Norway,” it has become “a 100-kilometer black hole” on the Syria-Jordan border, the statement added.
The ministry also accused the US of not letting humanitarian convoys through the area to reach the Rukban refugee camp, which is located close to the base.
The camp is reportedly hosting around 60,000 women and children from Raqqa and Deir ez-Zor.
The refugees in Rukban serve as a “human shield” for the American base, the ministry’s spokesman, Major-General Igor Konashenkov, said.

In short, the US base is there to protect the CIA trained terrorists, and nothing else.
Meanwhile, Krasnaya Zvezda (Red Star) newspaper has showed that 91.6 percent of the land is now free from the Islamic State terrorist group Daesh.
During the past week, Russian warplanes have made some 500 sorties, the military said, destroying almost 1,400 Daesh assets.
Russian forces in Syria have also continued scouting Daesh-controlled territories using surveillance drones. They have flown more than 190 missions during that period and identified over 129 Daesh targets.
The war in Syria has been on since 2011. A security vacuum let the Daesh seize large swathes of land and proclaim an Islamic caliphate in the areas under its control. Russia launched a military operation in Syria in September 2015 to provide air support for Syrian government forces, driving Daesh militants from much of Syrian territories.

For the last few years, Saudi King Salman has been touring Eurasia to explore his kingdom’s option outside of the Western Deep State. He is on a 4-day visit to Moscow this week.

7 thoughts on “91% of Syria Liberated; ISIS Attacks from US Controlled Al-Tanf Base Perimeter”