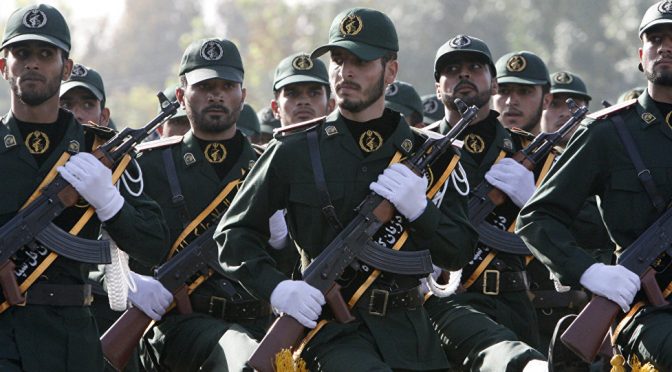 Tehran has reportedly indicated its response to the US designating the Iranian Revolutionary Guards Corp (IRGC) as a terrorist group will be “crushing” – but while it’s questionable whether the IRGC fits the definition of a terrorist group, the US’ history of terror designation suggests its requirements are vastly arbitrary.
The government of Iran has signaled it will offer a “crushing” response if the US designates its elite Revolutionary Guards Corp (IRGC) as a terrorist group.
“We are hopeful that the United States does not make this strategic mistake. If they do, Iran’s reaction would be firm, decisive and crushing and the United States should bear all its consequences,” Iranian Foreign Ministry spokesperson Bahram Qasemi told state news agency IRNA.
Fighting ‘Deviant Movements’
​The IRGC was founded after 1979 Revolution. Whereas Iran’s regular military (or Artesh) defends the country’s borders and maintains internal order, the Revolutionary Guard is intended to protect the country’s Islamic Republic system, preventing foreign interference, coups by the military or destabilization by “deviant movements” (internal groups, individuals and elements opposed to the government).
The Corps has roughly 125,000 military personnel including ground, aerospace and naval forces, with the latter now the primary forces tasked with operational control of the Persian Gulf. It also controls the paramilitary Basij militia which has about 90,000 active personnel.
Individuals and entities associated with the IRGC are already on the US list of foreign terrorist organizations, but the organization as a whole is not.
Tehran has made clear such a move, and/or further sanctions, would end chances for future dialogue with the US, and Washington would be compelled to move their regional bases outside the 2,000 km range of IRGC’s missiles.
‘Totally Inappropriate Things’
Qasemi also denied President Donald Trump’s accusations Iran had cooperated with North Korea, on “things that are totally inappropriate,” calling them “baseless.”
Trump has taken a considerably aggressive stance on Iran since taking office, using his first speech to the United Nations General Assembly in September to call the Islamic republic a “corrupt dictatorship,” and the nuclear deal negotiated by his predecessor Barack Obama “an embarrassment.”
The President imposed sanctions in July on 18 entities and people for supporting the IRGC in developing drones and military equipment, over what he alleges are the Corps’ “malign activities” across the Middle East.
The next month, Trump approved the “Countering America’s Adversaries Through Sanctions Act” which imposed fresh sanctions on Iran for its ballistic missile program, and North Korea for its nuclear weapons development.
One Government’s Terrorist…
Whatever the truth of the IRGC’s activities, what isn’t up for debate is the elasticity of the US Government’s official terrorism designation lists.
For instance, in the early 1980s, Iraq (then-aligned with the Soviet Union) was placed on Washington’s official “terror state” list, before being removed when officials began arming Saddam Hussein’s government in its war with Iran, before being replaced again following Iraq’s invasion of Kuwait.
Iraq’s activities during its period off the list — when it was armed and supported by the US government — formed part of the justification for the subsequent US-led Gulf War.
Washington’s approach to designating terrorist groups also appears somewhat fickle. For example, Iranian dissident group Mujahedin-e Khalq (MEK) was between 1997-2012 formally designated as a “foreign terrorist organization.” When the George W. Bush administration sought to justify the 2003 Iraq war, it accused Hussein’s government of being a sponsor of “international terrorism” — one of its prime examples was Iraq’s “sheltering” of the MEK.
However, in the wake of the Iraq war, with Washington’s crosshairs shifting to Iran, mainstream political support for the group’s delisting began to burgeon — despite reports suggesting the MEK’s terrorist activities in fact intensified during the period.
In February 2012, NBC News reported “deadly attacks on Iranian nuclear scientists” were being carried out by the group, and cited unconfirmed reports in the Israeli press that Israel and the MEK were involved in a bomb attack explosion that destroyed the Iranian missile research and development site at Bin Kaneh, 30 miles outside Tehran.
Later that year, the group was removed from the list permanently.
What Next?
Trump is expected to announce a final decision on how he will “contain” Tehran October 15.
There are suggestions he may decertify a landmark 2015 international deal to curb Iran’s nuclear program, in a step that potentially could cause the entirely accord to unravel.
The deal, which was also supported by the UK, France, Germany, Russia and China, saw Iran agree to curb its nuclear program in return for the lifting of international sanctions that had damaged its economy.

6 thoughts on “Defense Against 'Deviance': What Is the Iranian Revolutionary Guard Corps?”