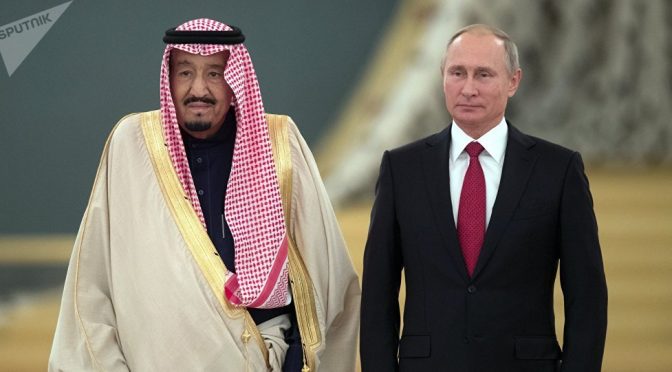 Saudi Arabia pivots to Russia, the new sheriff in town. What a difference a year – an eternity in geopolitics – makes. No one could see this coming; the ideological matrix of all strands of Salafi-jihadi terror – which Russia fights no holds barred, from ISIS/Daesh to the Caucasus Emirate – beating a path to the Kremlin and about to embrace Russia as a strategic ally.
by Pepe Escobar for the Asia Times
The House of Saud was horrified by Russia’s successful campaign to prevent regime change in Syria. Moscow was solidifying its alliance with Tehran. Hawks in the Obama administration were imposing on Saudi Arabia a strategy of keeping oil prices down to hurt the Russian economy.
Now, losing all its battles from Syria to Yemen, losing regional influence to both Iran and Turkey, indebted, vulnerable and paranoid, the House of Saud has also to confront the ghost of a possible coup in Riyadh against Crown Prince Mohammad bin Salman, a.k.a. MBS, as Asia Times reported. Under so much pressure, who’re you gonna call?
The ultimate ghostbuster; Russian President Vladimir Putin.
Essentially, the House of Saud is obsessed by three main vectors; low oil prices; Iran and Shi’ism; and what to make of US foreign policy under Trump. Let’s take them one by one.

As much as a Moscow-Washington reset remains doomed, even with the implosion of Russia-Gate, House of Saud advisers must have known that the Kremlin won’t ditch its strategic relationship with Iran – one of the key nodes of Eurasia integration.
Moscow will keep aligned with Iran across “Syraq”; that’s part of the “4+1” (Russia-Syria-Iran-Iraq, plus Hezbollah) alliance in the Levant/Mesopotamia, an incontrovertible (and winning) fact on the ground. And that does not preclude Russia’s increasingly cozy relationships across the Arab world – as with Egypt, Jordan, the UAE and Libya.
What concerns Moscow, deeply, is Saudi (formal or informal) financing of Salafi-jihadi outfits inside Russia. So a high-level line of communication between Moscow and Riyadh works towards dissipating any misunderstandings regarding, for instance, jihadism in Tatarstan and Chechnya.
Moscow does not buy the much-spun (in the West) Iranian “aggressive behavior” in the Middle East. As a key negotiator of the Joint Comprehensive Plan of Action (JCPOA), Russia very well knows that Iran’s ballistic missile program is actually the key target of Trump’s imminent decertification of the Iran deal.
These missiles actually represent dissuasion against any possible US attack, “leading from behind” or not. The Islamic Revolutionary Guards Corp (IRGC) in Tehran has made it quite clear the ballistic missile program does not fall into the JCPOA, and will remain active.
Enter the memorandum of understanding (MOU) between the Saudis and Rosoboronexport (Russia’s state body for exporting military hardware) signed in Moscow for the purchase of the S-400 missile system; the Kornet-EM system; the TOS-1A; the AGS-30; and last but not least the new Kalashnikov AK-103.
The S-400 success story is unequivocal. Iran bought it. Turkey bought it. Now Saudi Arabia buys it – even after splurging a fortune in US weapons during Trump’s by now infamous “sword dance” visit to Riyadh.
So no wonder, after the S-400 news, the US State Department like clockwork approved the possible – that’s the operative word – $15 billion sale of 44 THAAD launchers and 360 missiles to Saudi Arabia, a very good business for Lockheed Martin and Raytheon.
The Pentagon’s defense security cooperation agency said, “this sale furthers US national security and foreign policy interests, and supports the long-term security of Saudi Arabia and the Gulf region in the face of Iranian and other regional threats.” Cynics already envisage a battle of Iranian S-400s and Saudi THAADs “moderated” by Saudi S-400s.

We are the new OPEC

King Salman may have boarded the Saudi Arabian Airlines flight, but the real architect of the pivot to Russia is MBS. Oil in Saudi Arabia accounts for 87% of budget revenues, 42% of GDP, and 90% of exports. MBS is betting all his cards on the Vision 2030 program to “modernize” the Saudi economy, and he knows very well it will be impossible to pull off if oil prices are low.
At the Russia Energy Week forum in Moscow, Saudi Arabia’s Energy Minister Khalid Al-Falih said the Aramco IPO – a key driver of funds to Vision 2030 – will happen in the second half of 2018, contradicting Saudi officials who earlier stated the IPO was once again postponed to 2019. And no one can tell whether it will take place in the NYSE or not.
Meanwhile, the priority remains the OPEC / non-OPEC deal (with Russia at the forefront) to “stabilize” oil prices, clinched in November 2016 to cut production. President Putin tentatively agreed the deal could be extended beyond March 2018, something to be discussed in detail at the next OPEC meeting in Vienna in late November.
The deal may certainly be seen as a purely strategic/economic measure to stabilize the oil market – with no geopolitical overtones. And yet OPEC is geared to become a brand new animal – with Russia and Saudi Arabia de facto deciding where the global oil markets go, and then telling the other OPEC players. It’s open to question what Iran, Algeria, Nigeria, Venezuela, among others, will have to say about this. The barely disguised aim is to bring oil prices up to a band of $60-75 a barrel by the middle of next year. Certainly a good deal for the Aramco IPO.
There were a rash of other deals clinched in Moscow – such as Aramco and the Russian Direct Investment Fund (RDIF) $1 billion fund for oil-services projects in Russia, plus another $1 billion for a technology fund.
This synergy implies Saudi Arabia investing in top Russian energy assets and Russia, for instance, supplying gas to the Saudi petrochemical industry and reducing drilling/production costs. Certainly a good deal for Vision 2030.

The new sheriff in town

To say that the Saudi pivot to Russia is rattling nerves across the Beltway is an understatement. The CIA is not exactly fond of MBS. 9/11-related puzzles are bound to resurface.
What’s also clear is that the House of Saud has realized it cannot be left to watching camels as the great Eurasia integration caravan picks up speed. Russia has pipelines crisscrossing most of Eurasia. China is building rail lines connecting all of Eurasia. And we haven’t even touched specific Saudi-Chinese projects part of the Belt and Road Initiative (BRI).
Those were the days of King Abdulaziz and FDR aboard the USS Quincy in the Suez Canal forging a strategic partnership; the days of Washington leading Saudi Arabia to increase oil production, drive down prices and weaken the USSR; the days of the Afghan jihad. Now there’s no US dependence on House of Saud oil anymore. And jihadist blowback is the name of the security game.
It may be too early to identify the Saudi pivot to Russia as the shift of the century. It is though a certified game-changer. Moscow is about to become the new sheriff in town, in virtually any town across Southwest Asia. And it’s getting there on its own terms, without resorting to a Colt dialectic. MBS wants energy/defense cooperation? He gets it. MBS wants less Russian cooperation with Iran? He doesn’t get it. OPEC aims at higher oil prices? Done. And what about the S-400s? Free – sort of – for all.
–
Just in case some don’t understand the universal appetite for Russian S-400, it is far more effective in intercepting incoming missiles than the US Patriot SAM system. This is due to its intercept accuracy, wider effective coverage radius and MACH 4 speed. And just like its THAAD counterpart, it can be used to send nuclear warheads, too, when the need arises.