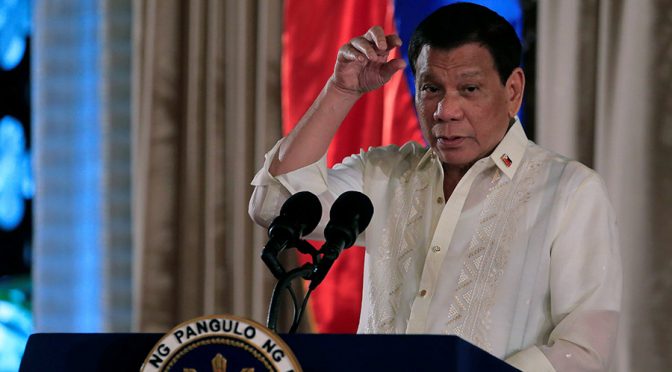 After the Human Rights Watch Advocacy director John Fisher warned over the weekend that the Philippines might be removed from the UN Human Rights Council because Manila is “seeking to evade its international responsibilities” by rejecting recommendations to improve the human rights situation in the Philippines, Philippine President Rodrigo Duterte unleashed an ultimatum for all EU ambassadors to leave the country.
“Now the ambassadors of those countries listening now: tell me because we can have the diplomatic channel cut tomorrow. You leave my country in 24 hours. All of you. You must have taken the Filipino for granted,” an angry Duterte said in his speech in Malacañan.
“Do not come to this country again, we do not need you. You want to expel us? You try,” he added.
Meanwhile, European parliamentarians early this week visited the country and cautioned that the Philippines risks losing the General System of Preference (GSP+)—a preferential trade deal that allows 6,200 of its products to enter the EU duty free—if it fails to immediately stop the killings and supposed political persecution of critics.
But Duterte was unfazed by the EU parliamentarians’ warning as he slammed Europe anew for supposedly interfering in Manila’s domestic affairs.
He also said the Philippines could let go any trade perks that EU has granted, adding that Southeast Asian countries and China could forge a free-trade agreement.
“You are interfering in our affairs kasi mahirap lang kami (because we are poor). Magbigay kayo ng pera (You give assistance) then you start to orchestrate what things should be done and which should not happen in my country,” Duterte said.
“You bullshit. We are past the colonization stage. Don’t fuck with us. We ASEAN members can export to each other. We could also have tariff-free [trade],” he added.

While the EU interventionists were busy diverting attention from their own handicap and bankruptcy, legitimate think tanks are providing various fora for the Philippine foreign ministry to tell the world about what’s really going on inside the country.