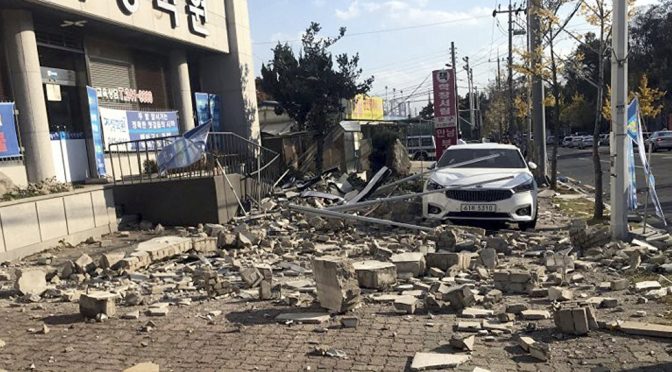 Unconfirmed rumors surfaced over the weekend that the CIA headquarters in Langley was raided by some elements of the US Marine Expeditionary Unit, but until today there’s no single video clip that would suggest it indeed happened. Nonetheless, we are being told to prepare for some earthshaking events for next year.

UPDATED 2:23 PM EST (SEE BOTTOM) — Reports are beginning to surface that a Marine Expeditionary Unit (MEU) landed at Langley on Saturday.
A Marine expeditionary unit (MEU, pronounced “Mew”), is the smallest Marine air-ground task force (MAGTF) in the United States Fleet Marine Force. Each MEU is an expeditionary quick reaction force, deployed and ready for immediate response to any crisis, whether it be natural disaster or combat missions.
A Marine expeditionary unit is normally composed of: a reinforced Marine infantry battalion (designated as a Battalion Landing Team) as the ground combat element, a composite medium tiltrotor squadron forms the aviation combat element, a combat logistics battalion provides the logistics combat element, and a company-size command element serves as the MEU headquarters group.
Troop strength is about 2,200 and usually commanded by a colonel, and is deployed from amphibious assault ships. Currently, a Marine expeditionary unit embarks Marines and equipment onto the amphibious warfare ships of an Expeditionary Strike Group (ESG) which also includes escort ships and submarines to protect them from air, surface, and submarine threats. For further protection and strong air support, such an ESG is often deployed along with one or more carrier battle groups.

Everybody knows by now that there were a lot of exposes running in parallel with the signing of multilateral agreements during the twin APEC and ASEAN summits a week ago.
The recently-concluded summit and a raft of agreements signed between the Presidents of China and Panama, coming right on the heels of the historic Xi-Trump summit-plus, is an indication of how rapidly and profoundly the strategic situation is advancing. In less than six months, Panama went from having diplomatic relations with Taiwan and not with China, to signing 19 economic agreements with China—including Panama’s full participation in the Belt and Road Initiative, as a platform for all of Ibero-America to do the same—as well as adhering to the one-China policy.
Or, consider the breakneck speed at which China-Europe freight train traffic is increasing, where this year 3,000 trains traveling on 57 lines carried more cargo than the last six years combined. The Yiwu-Madrid line alone saw a 54% jump in cargo over last year.
The stunning speed and depth of events is leaving most people, including some of the major players themselves, feeling buffeted by developments. Don’t bother asking the principals why they are doing what they are doing: they don’t really know. By and large, they are ignorant of the cause of the changes underway—sometimes blissfully so.

While the Khazarian stooges are being rooted out one by one, the American people are being blacked out from the news and groundbreaking events here in Asia. But this doesn’t mean that they are being left out.
“… when President Trump came back from the Asia trip, he said that he had deals for about $300 billion, but that these deals would only be the beginning, and soon this figure would be threefold.”

There will be prosperity for all, only this time, the program that has been subverted and misused by Western oligarchs, not just once, but in multiple occasions, will be implemented under the direction of Asian leadership.
The gradual yet systematic curtailment of unwarranted power may continue to cause aggressive resistance from the outgoing Hegemon. It is in this context that we are being warned about some literal earthshaking events to happen next year.
The Earth’s slowing rotation may cause a significant increase in frequency of large earthquakes in 2018.
In a paper published in Geophysical Research Letters in August and presented at the annual meeting of the Geological Society of America last week, Robert Bilham of the University of Colorado and Rebecca Bendick of the University of Montana studied every earthquake since 1900 with a magnitude 7.0 or greater on the moment magnitude scale.
“Major earthquakes have been well recorded for more than a century and that gives us a good record to study,” Bilham told the Observer last week.
… Scientists don’t know yet why the speed of Earth’s rotation correlates with the frequency and intensity of earthquakes, but one theory is that changes in the flow of molten iron in Earth’s outer core could affect both the planet’s spinning speed and seismic frequency.

In line with all of this, no less than the incumbent Federal Reserve Chair Janet Yellen is saying that she will step down from its Board of Governors once her successor is sworn into the office, giving more than enough latitude to President Trump to implement the necessary reforms to the real economy of the US in the near term.
“As I prepare to leave the Board, I am gratified that the financial system is much stronger than a decade ago, better able to withstand future bouts of instability and continue supporting the economic aspirations of American families and businesses,” Yellen, the first woman to lead the U.S. central bank, wrote Monday in her letter of resignation to Trump.
Yellen could have remained on the Board even after stepping down as the institution’s leader, because her term as governor does not end until January 31, 2024, though such a decision would have come as a surprise. The last time someone relinquished the chairmanship, but stayed on as a governor was Marriner Eccles in 1948.
Trump has nominated Jerome Powell to replace Yellen, 71, when her term ends in February, though his chairmanship is still subject to Senate confirmation. That move bucked a long-standing tradition of presidents reappointing their predecessor’s Fed pick.

That’s something we can be positive about. This doesn’t mean, however, that we could let our guards down when it comes to the ongoing establishment of a cashless society under the same Western control freaks.
In the meantime, we can celebrate with the Asians for their steadfast solidarity to refuse any more attempts to divide and rule them for the benefit of some families who believed that playing god makes them so.
In that department, China is ready to respond in kind…

China’s next Generation (ICBM) the Dongfeng-41 could be in the PLA's lineup as early as the first half of 2018.

Dongfeng-41 is a three-stage solid-fuel missile with a range of at least 12,000 KM, “It can carry up to 10 nuclear warheads, each of which can target separately.” pic.twitter.com/MPzwIKnqH8

— 1 missile with 10 Nuclear bombs (heads)
— Can reach NY or SF in less than an hour
— China's DongFeng-41#ArmsRace pic.twitter.com/H1IsbB6c9w