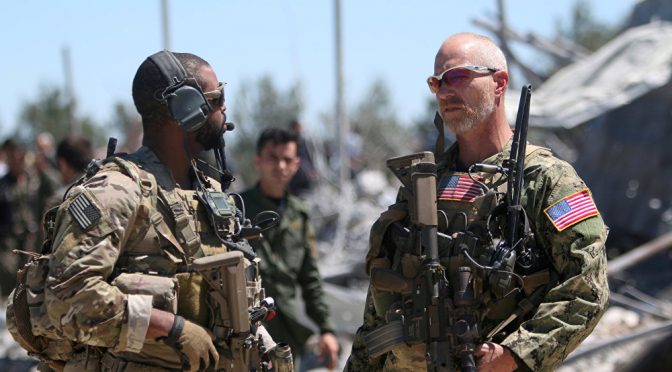 While the City of London and Wall Street are busy with one last-gasp effort to salvage their (unsalvageable) financial system, with an ECB bail-in plan designed to seize all financial assets for themselves—their earlier “Cyprus Template” writ large—Russia, China and allied nations are instead orchestrating a Grand Design for Middle East and world stabilization and peace, as suggested by what might be called a “Syria Template.”
We refer to the November 21 discussions in Sochi, Russia among visiting Syrian President Bashar al-Assad, and Russian President Vladimir Putin, and that country’s top military command, in which they discussed their successful cooperation to bring Syria back from the abyss. Describing the moving exchange, Helga Zepp-LaRouche today commented: “This is an incredible idea, because in two years a completely hopeless situation was turned around. There was unbelievable human suffering, with the Syrian people being exposed to an enormous ordeal, but they came out victorious.”


If that can be achieved in Syria, a microcosm of the worst horrors that the dying world order of geopolitics and looting has created, then there is no reason that a similar about-face cannot be achieved globally, building a New Paradigm around China’s keystone Belt and Road Initiative. Helga Zepp-LaRouche summarized the strategic situation as follows:
“The main dynamic of change has to come from the United States. The follow-up from the Trump visit to China is really what will determine the situation. This is a unique moment in the history of mankind, not just of the U.S. That is the sense that we must get across to people.
“There is an enormous potential. You can see that in the dynamic which was shown between Xi Jinping and Donald Trump, which was a historic meeting. You can see it in Panama now joining with China on the Belt and Road Initiative, and the President of Panama saying this is where all of Ibero-America will go. It’s there in the rapprochement between Japan and China; in the Astana-Putin process for the consolidation of the situation in Syria and beyond; and in the profound changes underway in Africa through China’s investments there.
“All of these elements are moving in a very positive direction. But the Sword of Damocles of a potential financial crash is still hanging over the world… The potential is very clearly there, and it has never been greater. But it would also be a big mistake to think that we have won already, just because we have helped to create this potential. Until we have a complete victory of the New Paradigm, we should not have one resting minute,” Zepp-LaRouche stated.
She concluded: “Nor should we give in to the idea that you need some sort of ‘national expression’ of sane interest. We really have to fight with people that we need a New Paradigm, a completely new set of relations where geopolitics is simply thrown out the window. Because Mankind should be defined from the future, from 10,000 years from now, looking back at the present: How do we want to live 10,000 years from now? Will we still be barbarians or will we be humans?”

History is being written in Sochi, where Russian President Vladimir Putin held an unannounced meeting with Syrian President Bashar al Assad on Nov. 20 and then introduced him to the Russian military leadership who “helped save Syria.” Tuesday Putin briefed President Donald Trump about his discussions with Assad. Tomorrow, Nov. 22, Putin will chair the Astana Talks with the other two guarantor countries, Iran and Turkey, and will consult with Assad during the course of the talks. Putin yesterday also spoke by phone with the Emir of Qatar.
The focus of the Putin-Assad exchange was that the victory against ISIS was the start of a political process to bring peace and reconciliation to Syria. The Kremlin posted long excerpts of the exchanges between the two leaders, which give a sense of the historical importance of the talks. Excerpts of those exchanges follow:
Putin began: “Welcome to Sochi. First, let me congratulate you on Syria’s results in combatting terrorist groups as well as on the fact that the Syrian people, despite a very difficult ordeal, are gradually moving towards the final and inevitable defeat of the terrorists.
“Mr. President, as you know, I will meet with my colleagues — the Presidents of Turkey and Iran — here in Sochi the day after tomorrow. We have agreed to hold additional consultations with you during our meeting. Of course, the main subject on the agenda is a peaceful and lasting political settlement in Syria after the routing of the terrorists.
“As you know, in addition to the partners I have mentioned we are also working closely together with other countries, such as Iraq, the United States, Egypt, Saudi Arabia and Jordan. We maintain constant contact with these partners.
“I would like to talk with you about the basic principles of the political process and the Syrian National Dialogue Congress, the idea of which you have supported. I would like to hear your opinions on the current situation and development prospects and your views on the political process, which should ultimately be implemented under the UN auspices. We also hope that the UN will join the [political] process at its final stage.”
Assad replied, acknowledging Russia’s role in helping Syria win the war against terror. “Over this period, we have achieved major success both on the battlefield and on the political track. Many regions in Syria have been liberated from the terrorists, and the Syrians who had to flee from these regions can now return there.
“It should be acknowledged that the operation brought progress to the political settlement in Syria. And the process which was started and which Russia promoted with various efforts continues, above all, based on respect for the UN Charter, the state’s sovereignty and independence. This stance has been defended at various international platforms, including the talks in Astana. The same goes for the plans to hold the Syrian National Dialogue Conference in a few days. Today we have an excellent opportunity to discuss both the upcoming conference and the upcoming summit, and to coordinate our views on the next steps.
“First, I would like to take an opportunity and pass congratulations and gratitude from the Syrian people to you, Mr. President, for our joint success in defending Syria’s territorial integrity and independence. We would like to extend our gratitude to those institutions of the Russian state that provided assistance — primarily, the Russian Defense Ministry that has supported us throughout this operation. Also I would like to pass our gratitude to the Russian people who remain a friendly nation to us. They have supported us all along.”
Putin responded by remarking that thanks to the Astana talks, de-escalation zones could be built and preconditions for the political process were laid. “Based on the outcome of this meeting [with Assad], I will consult further with the leaders of the countries I just mentioned. A conversation with the Emir of Qatar is scheduled for today. Tomorrow, I am speaking with U.S. President Donald Trump. After that, I am speaking with the leaders of the countries in the region.”
Assad responded: “At this stage, and especially after our victories over the terrorists, we are interested in promoting the political process. We believe that the political situation that has developed in the regions offers an opportunity for progress in the political process. We hope Russia will support us by ensuring the external players’ non-interference in the political process, so that they will only support the process waged by the Syrians themselves. We do not want to look back. We will accept and talk with anyone who is really interested in a political settlement.”
Putin said he is “glad that you are ready to work with anyone who wants peace and conflict resolution.”