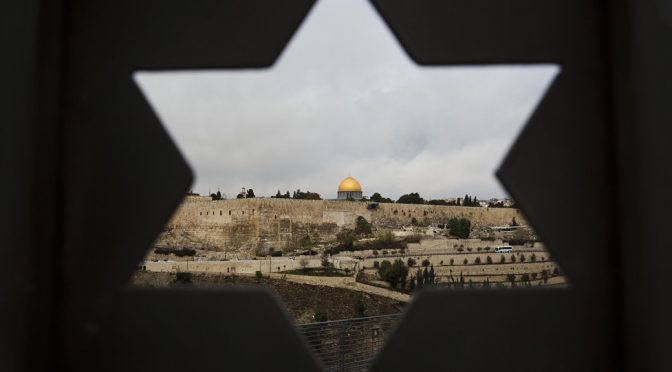 President Trump’s decision to recognize Jerusalem as Israel’s capital is not only a clear violation of international law, but a moral outrage when it comes to its contempt for and violation of the rights of the Palestinian people.
Under the stewardship of Benjamin Netanyahu, Israel has embraced with unfailing ardor a rejectionist stance on Palestinian statehood. He knows peace, a viable peace, cannot exist and will never exist unless justice for the Palestinians is placed at its heart.
Hitherto the Israeli prime minister stood isolated in his obduracy, but now with Trump in the White House his greatest dream has come true in the form of a willing partner in his refusal to depart as much as an inch from his embrace of Israeli exceptionalism and belief Israel’s right to the land of Palestine is inviolate. In service to this position Netanyahu has made clear there no price should not be paid, up to and including war, when it comes to asserting this right.
Of course, Israel had no such right to Palestinian land and never has — unless, that is, religious and biblical obscurantism is the kernel of international law and diplomacy in the 21st century.
Jerusalem is unequivocally and indisputably a part of occupied Palestine, and adjudged such by both the General Assembly and Security Council of the United Nations. It also constitutes a breach of the Fourth Geneva Convention, specifically Article 49 concerning forced transfer and deportations of civilians out of an occupied territory, and transfer of its own civilians into said occupied territory.
So the violation of international law reflected in the assumption of Jerusalem as Israel’s capital is clear and inarguable, just as it has been over its decades-long occupation of Palestinian land. What has been lacking, and grievously, throughout this time is the requisite will on the part of the international community to take serious measures by which to compel Israel to conform to its obligations under international law as a UN member state.
The only reason Israel has been able to continue to flout those obligations is its longstanding alliance with the US, providing it with unparalleled military, financial, and military support. The bond which the political establishments of both countries share is long and, in the inimitable words of the 44th President of the United States Barack Obama, “unbreakable.”
The point surely though is no one is asking or expecting it to be broken. All people who are of goodwill expect, and are entitled to expect, is Washington — with the extirpation of its own indigenous population as part of its history in mind — stand on the side of international law (the operative word here being ‘international’) instead of being complicit in its breach, as it has been and continues to be when it comes to its support for Israel’s occupation of Palestine.
Trump’s recklessness and disregard for the craft of diplomacy has once again thrown a metaphoric hand grenade into the midst of an issue and region needing another incendiary development like a malnourished man needs a diet. Does the current US president think this is a game? Does he understand he’s supposed to be the leader of the most powerful country in the world and not starring in an episode of The Sopranos?
The barrage of criticism directed at this development from across the world tells its own story. It is a development which constitutes, undeniably, the final nail in the coffin of the Middle East  peace process, pushing the Palestinians down the path towards physical resistance in the form of a third intifada as a consequence.
Who could possibly blame them? Decades spent existing under the brute heel of occupation in the West Bank — where Jewish only settlements, again entirely illegal, have expanded and continue to spread, where hundreds of checkpoints are a daily reminder of their subjugation and degradation, occupied land the natural resources of which have and continue to be expropriated — can only but leave a sour taste.
Meanwhile, Gaza continues to exist under a siege amounting to collective punishment, one evincing no sign of abating anytime soon. Taken together, it’s as if the Israeli government under Netanyahu’s leadership is conducting a mass experiment in human despair.
Ironically, such a brazen move by Trump, with the fulsome support and delight of his Israeli counterpart, can only weaken rather than increase Israel’s security. It will serve to marginalize moderate Palestinian voices and allow more radical ones to come to the fore, able to point to this measure as irrefutable evidence of the futility of a diplomatic solution to the crisis, attracting support for their belief in resistance by any means necessary, including, as mentioned, physical resistance.
It’s hard to avoid the conclusion Trump’s understanding of the Middle East, with all its complexities, is of insufficient breadth to fit on the back of a postage stamp. And while some may be tempted to ascribe to the 45th president the withering verdict of one of his predecessors, Lyndon Johnson — i.e. so dumb he can’t fart and chew gum at the same time — what we are dealing with is more serious than merely a question of intellect. Indeed, Donald Trump is far from stupid.
No, here what we are dealing with is a question of ethics — or to be more accurate, a lack of ethics. As such, it is exactly as the French philosopher and writer Albert Camus said: “A man without ethics is a wild beast loosed upon this world.”
Follow John Wight on Twitter.