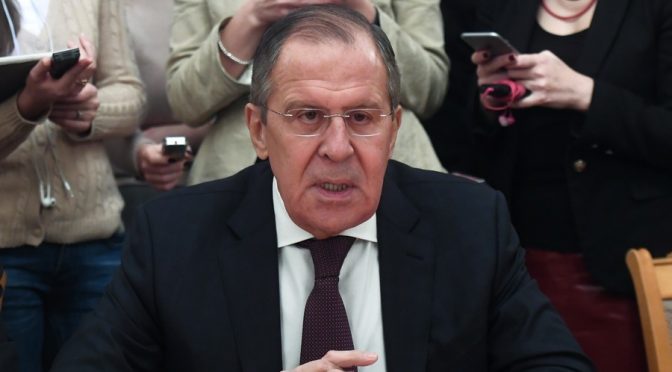 In his Dec. 25 interview with RT, Russian Foreign Minister Sergei Lavrov addressed the roots of the “multipolar world” now coming into being, as the dangerous fantasy world of the Bush/Obama years, of the U.S. as the “Only Superpower,” comes crashing down along with the western banking system.
Lavrov said: “I think that the concept of a multipolar world came into being not ten, but rather some 20 years ago. It was put forward by Yevgeny Primakov when he served as Russia’s Foreign Minister, in 1996-1998. He was also behind the initiative to set up the Russia-India-China (RIC) three-sided cooperation framework, which operates to this day…. The RIC framework paved the way to what we now call BRICS, when Brazil and later South Africa joined the Russia-India-China trio. I believe that this is indicative of the trend towards the emergence of what we call a polycentric world order.”
In December 1998, Primakov, who had become Prime Minister as of September 1998, visited India, where he called for the formation of a strategic triangle among the three giant nations of Eurasia — Russia, India, and China. Then, in March 1999, Primakov scheduled a visit to Washington to meet with President Clinton, almost certainly to discuss his strategic triangle concept and appeal to the US to support it, or even to join it. Al Gore, then the Vice President (or President of Vice, as LaRouche called him), sabotaged the meeting by calling Primakov, who was already on his plane heading to the U.S., and telling him that the U.S. would be bombing Yugoslavia during his visit.
LaRouche responded in the EIR of April 2, 1999: “The members of the Principals’ Committee, including Vice-President Al Gore, knew beforehand, that Russia’s Prime Minister would cancel his visit to Washington the instant he were informed that the bombing of Yugoslavia would begin during the period of his scheduled visit. President Clinton had signalled to all with the brains to hear a clear Presidential signal, to the effect that there would be no bombing of Yugoslavia during the period of Primakov’s visit. Gore et al. were desperate to prevent the visit from occurring. Gore, going behind the President’s back, intercepted the Russian Prime Minister, a mere two hours before his scheduled arrival in Washington, informing the Prime Minister that the bombing would probably occur during the time of the visit!”
Primakov ordered the plane to return to Moscow. LaRouche headlined his article: “Gore Provokes Total War!” That warning, regarding Gore and his fellow British assets Obama and Hillary, still stands today.
A few months later, in October 1999, Lyndon LaRouche, speaking at the Rhodes Forum, expanded on Primakov’s vision, and his probable intention, by called for a “Four Powers” consortium, with Russia, China, India and the U.S., as the necessary basis for ending the British Empire and establishing a new paradigm embracing all sovereign nations, cooperating for peace and development. LaRouche said: “Therefore, the task, as I defined it, is, if Russia, and the United States, and China, and India, agree, as a group of countries to initiate and force a reorganization of the world financial and credit system, under these conditions, with long-term agreements, of the same type that Franklin Roosevelt had uttered before his death, in 1944, under key nations, the intention of Roosevelt all these years later, could have been realized, and we could do that today.”
This is the history which Lavrov is referring to today. Lavrov added (in RT’s paraphrase): “A global financial reform that would account for new centers of economic growth and the dwindling role of the dollar is what drives the transition. The G20 format is likely to be the driving force of the reform, with roughly half of the group sharing Russia’s goal of decentralizing world finances. As for a new set of rules, they will grow organically as the world transforms.”

As we head into the New Year, bringing about LaRouche’s vision for the “Four Powers” to collaborate in creating a new world order based on the common aims of mankind is urgent, and, more than at any time in the past, totally possible.
https://larouchepac.com/20171226/lavrov-addresses-roots-new-paradigm-christmas-interview

16 thoughts on “Roots of New Paradigm”