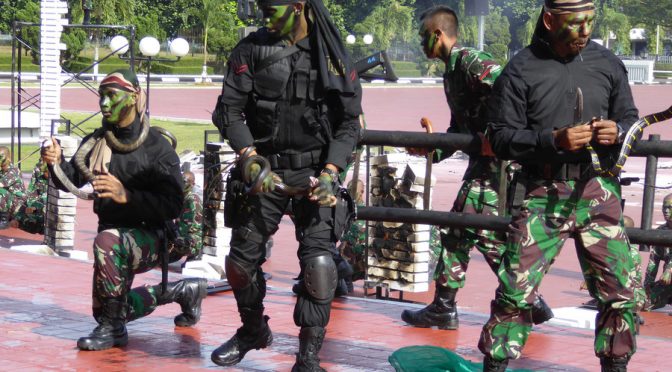 US Defense Secretary Jim Mattis is on an Asian tour to check the loyalty of his Asian counterparts. When he arrived in Indonesia, he was treated to a “bizarre” Special Forces martial art skills demonstration, including the live decapitation of snakes and the consumption of their blood. Unsurprisingly, he was very impressed by the unusual presentation.

“The snakes! Did you see them tire them out and then grab them? The way they were whipping them around – a snake gets tired very quickly,” Mattis told reporters, as cited by Reuters.
The US defense secretary retired from active service with the Marines in 2013, and was dubbed ‘Mad Dog’ by the press for his exploits in Iraq.

What he didn’t understand is that, here in Asia he is considered as a despicable manipulator, or a traitor as symbolized by the snakes,

#Indonesia's military chief invited to US, then barred from entering at last minute https://t.co/ur7zBb42IP pic.twitter.com/5giHeIcb7T

… and that the whole exercise was meant as a warning to any new attempts at sowing conflicts among Asians.

“US Defense Secretary Jim Mattis was treated to a bizarre and brutal display of military and martial arts skill by Indonesia’s special forces in which live snakes were decapitated and their blood consumed.

Special forces in Indonesia demonstrates to Mattis their ability to eat snakes. pic.twitter.com/I24p5adzsG

The press corps traveling with Mattis was expecting a standard hostage rescue drill and were totally unprepared for the fire walks, helicopter drills, and counter terrorist simulations which included attack dogs. Indonesia’s elite and historically vicious counter-terrorism force, the Kopassus, dazzled Mattis with a highly unorthodox display of military expertise at a military headquarters in Jakarta Wednesday.
Pounding drums provided the soundtrack to a fierce martial arts exhibition in which the special forces commandos obliterated flaming wooden and brick obstacles with their fists, feet and foreheads.
The fearsome warriors then took a break and shared snake blood from freshly-slaughtered cobras in a sign of brotherhood. The bags of snakes were emptied mere feet in front of Mattis before the soldiers decapitated the serpents. One soldier even tore a live snake apart with his teeth.
“You could imagine how much training went into each individual there, that they were able to do that,” Mattis told reporters later, according to The Washington Post. “When you watch a force do that, many small things, perfectly, you can imagine that they can also put the bigger things together.”
Once the ceremony restarted, a commando rolled on broken glass while his colleague fired a pellet gun at a balloon held between his blindfolded comrade’s legs, missing only once, though no-one was injured. Another blindfolded commando reduced a cucumber, held in his colleague’s mouth, to smithereens without so much as a scratch on his assistant’s face.
The next set piece in the spectacle saw troops abseil from helicopters with their attack dog companions while the theme from ‘Mission Impossible’ blared in the background. One dog later leapt through an open car window to apprehend a mock terrorist.

Mattis is touring Asia for possible financial help that will avoid the complete shutdown of the Federal United States Corp, while reassuring his organization to have the necessary budget for the “daily operations around the world – ships and submarines will remain at sea, our aircraft will continue to fly and our war fighters will continue to pursue terrorists throughout the Middle East, Africa and South Asia.”
Indonesia answered that, too, with the “Mission Impossible” theme song during that same occasion.
The Pentagon has been selling regional and geopolitical security services here in Asia and in the Middle East for decades now, while the CIA is constantly creating the need for these services through the low cost and low maintenance terrorist groups, and clandestine political assassinations.
If these war freaks are still thinking that they command the respect of Asians, they are gravely wrong. That’s never been the case at all.