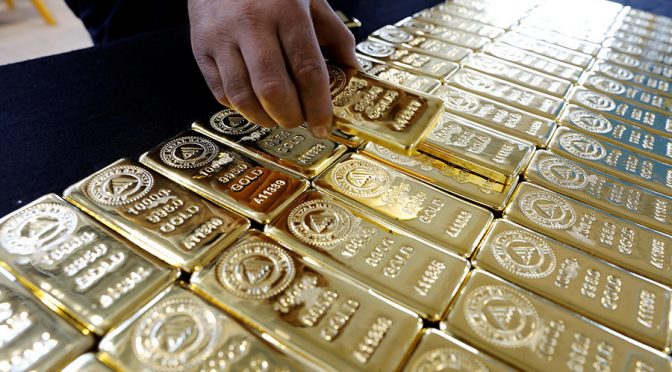 A weak US dollar, a possible war between the US and North Korea or the impeachment of Donald Trump could result in one of the longest-ever rallies for gold, according to precious metals expert Jim Rickards.
“This is gold’s breakout year. We are in the third bull market of my lifetime – and we have a very long way to run,” Rickards said in an interview to Kitco News.
The reasons for the forecast gold rally are a possible plunge in the dollar, a US war with North Korea, a trade war with China and President Trump’s impeachment, he said.
These events could push gold prices to $10,000, Rickards said. Gold prices have slumped in recent days after reaching more than a year high of $1,370 last week. On Monday, the commodity was trading at $1,347.
However, a surge may be accompanied by a rise in commodities prices.
“All gold does is it preserves your purchasing power. But, if gold is $5,000, then oil is probably $400, and everything is double or triple, you’re not really ahead of the game,” Rickards said.
The last week’s increase was linked to a statement by US Treasury Secretary Steven Mnuchin, who said on two consecutive days that the US administration favors a weak dollar in trade. The dollar sank to a three-year low on his remarks.

The gold price rose to its highest level in more than a year on Thursday as investors seek a safe haven after the US dollar dipped to a three-year low against a basket of six major currencies.
The precious metal rose as high as $1,370 during the trading session before dropping six dollars, but still trading in the green compared to the previous session. The 2016 high was $1,374.91.
“Gold is benefiting tremendously from the weaker dollar,” said ETF Securities analyst Nitesh Shah, as quoted by Reuters.
“With traders’ base case scenario to sell the dollar at all costs, gold prices should remain well supported on dips and could be poised to move even higher on the next US dollar wobble,” said Stephen Innes, APAC head of trading at OANDA.
The US dollar fell to its lowest level in three years against major currencies on Wednesday after US Treasury Secretary Steven Mnuchin said the US administration favors a weak dollar in trade.
On Thursday, Mnuchin confirmed his words.
“I thought my comment on the dollar was actually quite clear yesterday. I thought it was balanced and consistent with what I said before, which is we are not concerned with where the dollar is in the short term,” he said, as quoted by Bloomberg.
President Donald Trump’s administration has repeatedly said that a weak dollar helps make American-made goods more competitive with goods from China and other markets.