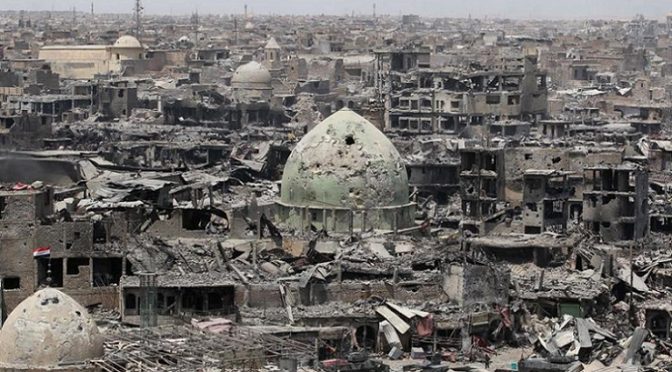 Like a local mafia that breaks car windows by night and repairs them by day, the United States has enlisted its Gulf Cooperation Council (GCC) partners – namely Saudi Arabia, Qatar, Kuwait, and the United Arab Emirates – to “rebuild” in Iraq in the wake of the defeated, self-proclaimed Islamic State (ISIS) these same states sponsored.
Reuters in an article titled, “Coalition members must help Iraq rebuild, Tillerson says,” would report (emphasis added):
The U.S. leads the coalition and hopes that after a three-year fight to defeat the militants it can count in large part on Gulf allies to shoulder the burden of rebuilding Iraq and on a Saudi-Iraqi rapprochement to weaken Iran’s influence in the country, which is run by a Shi‘ite led government.
The article also reports (emphasis added):
Donors and investors have gathered in Kuwait this week to discuss efforts to rebuild Iraq’s economy and infrastructure as it emerges from a devastating conflict with the hardline militants who seized almost a third of the country.
US Secretary of State Rex Tillerson would be quoted by Reuters as claiming:
If communities in Iraq and Syria cannot return to normal life, we risk the return of conditions that allowed ISIS to take and control vast territory.
Yet even a causal student of history, military affairs, or modern warfare knows that armies tens of thousands strong, with regional, even global recruiting, training, and logistical networks do not spring up out of poverty or economic ruination. The operation capacity demonstrated by ISIS is only possible with significant state sponsorship.
US Enlists Those Who Sponsored ISIS to Rebuild Iraq
Mention of Kuwait serving as a venue for “donors and investors” seeking to “reconstruct” Iraq is particularly ironic for those who remember the UK Telegraph’s 2014 article titled, “How our allies in Kuwait and Qatar funded Islamic State.”
The article states (emphasis added):
Islamic State (Isil), with its newly conquered territory, oilfields and bank vaults, no longer needs much foreign money. But its extraordinarily swift rise to this point, a place where it threatens the entire region and the West, was substantially paid for by the allies of the West. Isil’s cash was raised in, or channelled through, Kuwait and Qatar, with the tacit approval and sometimes active support of their governments.
And while the article attempts to frame Kuwait and Qatar’s state-sponsorship of terrorism as a betrayal of the United States, the United Kingdom, and the European Union, the fact remains that such sponsorship was not only well known to Western intelligence and political circles, it was the GCC’s ability to raise massive legions of terrorists that formed the cornerstone of the US-GCC alliance against Libya, Syria, Iran, and Shia’a majority Iraq beginning in 2011.
It was revealed in a leaked 2012 US Defense Intelligence Agency (DIA) memo that the US and its GCC – as well as Turkish – allies sought the creation of a “Salafist principality” in eastern Syria for the specific purpose of “isolating” the Syrian government.
The 2012 memo (PDF) would state specifically that:
If the situation unravels there is the possibility of establishing a declared or undeclared Salafist principality in eastern Syria (Hasaka and Der Zor), and this is exactly what the supporting powers to the opposition want, in order to isolate the Syrian regime, which is considered the strategic depth of the Shia expansion (Iraq and Iran).
The DIA memo would also explain who these “supporting powers” are:
The West, Gulf countries, and Turkey support the opposition; while Russia, China, and Iran support the regime.
That “Salafist principality” would eventually take shape as the so-called “Islamic” (Salafist) “State” (principality) and be used specifically to both pressure the Syrian government in Damascus as well as create a pretext for the permanent occupation of Syrian territory by US military forces when US proxies stood little chance of holding it themselves.
While the US declares ISIS more or less defeated, the fact remains that militants still fighting on in Syria include ISIS fighters in their ranks – and despite superficial differences – those particularly fighting in and around Idlib province in northern Syria are indistinguishable from ISIS in both terms of extremist ideology and from which states they receive their funding and weapons.
Rebuilding or Retrenching? 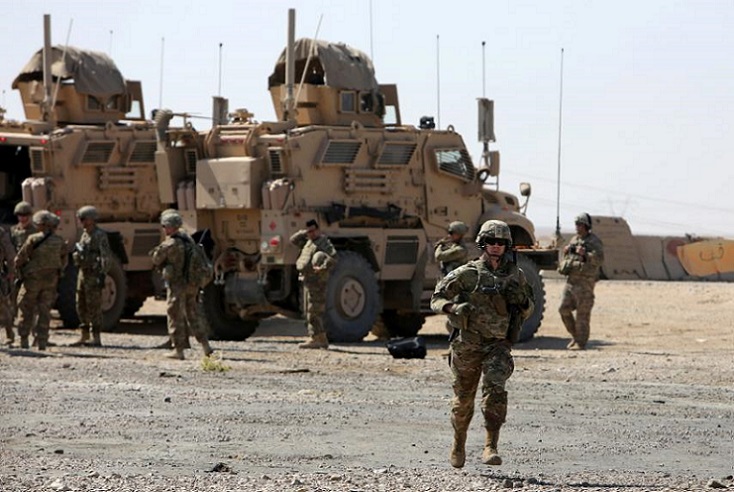 A similar slash and burn method was used in Iraq to invite a greater US role in Iraqi security in a conflict that cut a swath of destruction across Iraqi territory, particularly in Sunni-majority regions of Iraq.
The conflict created an opportunity for the US to strengthen Kurds in northern Iraq to further isolate and diminish the power of the Shia’a majority-led government in Baghdad, as well as create a pretext for US-GCC “rapprochement” as Reuters put it – to knock Sunni-majority regions of Iraq out of Baghdad’s orbit.
Reports in October last year indicated that the US was particularly interested in Iraqi highways connecting Baghdad with Jordan and Saudi Arabia. Analysts speculated that this was literally an inroad into Iraq the US and its GCC allies could use to not only build a permanent foothold in Iraq upon, but also a logistical corridor the “coalition” could use to bring in a future wave of militants aimed at rolling back Iran and its allies in neighboring Iraq and Syria.
Unlike in Syria where Russian airpower in 2015 quickly targeted and eliminated ISIS’ logistical networks streaming out of NATO territory in Turkey, highways in Iraq controlled by US contractors with a possible US military presence there as well would make repeating Russia’s success infinitely more difficult.
Kurdish media has also reported that the money Secretary Tillerson lobbied the GCC to contribute would also flow into northern Iraq. While under the guise of reconstruction aid, the investments in truth will give the GCC greater influence over the Kurds as well.
Pushing Out Iran
While the United States attempts to credit itself and its GCC partners with the defeat – rather than the creation of ISIS – it was in fact Iran’s role in both Iraq and Syria that provided the key to the organization’s defeat.
From across the Western media itself, articles like The Atlantic’s “The Shia Militias of Iraq” and PBS’ “Iraq’s Shia Militias: The Double-Edged Sword Against ISIS” admit to the central role Iran and its allies within Iraq played in defeating ISIS.
The wars the US and GCC launched against Syria and Iraq by proxy were aimed primarily at Iran. The rise of ISIS emerged from the proxy conflict’s failure to topple the Syrian government and move quickly onward to Iran.
The momentum of the West’s proxy campaign against Iran has been broken, leaving the West searching for footholds, while it continues whittling away at both Damascus and Tehran.
While the US claims it must “weaken Iran’s influence” in Iraq, it is only because it seeks to impose its own will on both Baghdad and the Middle Eastern region itself. For Iran, ties with Iraq, Syria, and the rest of the Middle East are owed to geographical proximity, shared history, and socioeconomic and religious ties that stretch back centuries. For the United States, its presumed role in the region stems solely out of its desire for hegemony – economic and geopolitical – in the same vein as traditional colonialism.
Watching the Footholds
Iraq has proven a desire to prevent its involuntary reordering in the wake of ISIS. Baghdad mobilized military forces that swiftly rolled Kurdish forces back to their pre-ISIS boundaries after Kurds took, and announced they would then hold them after ISIS forces vacated them.
A similar story appears to have unfolded regarding US attempts to control Iraqi highways leading out of Baghdad toward Iraq’s neighbors to the west and south. Iraq appears determined to assert its control over its own territory.
However, investments in the form of both obvious and more subtle footholds will likely still develop in the wake of ISIS’ defeat. What the US-GCC backed ISIS campaign destroyed will be rebuilt – and likely by US-GCC contractors representing US-GCC interests.
Watching these footholds develop and gauging Baghdad and its Iranian allies’ response to them will be essential in discerning what future opportunities the US-GCC might attempt to exploit amid their next attempt to reassert control over a Middle East quickly slipping away from them.
Tony Cartalucci, Bangkok-based geopolitical researcher and writer, especially for the online magazine “New Eastern Outlook”.

15 thoughts on “US Wants ISIS Sponsors to Rebuild Iraq”