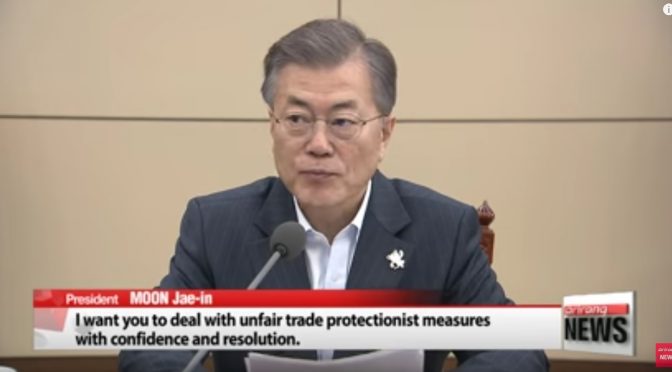 The US-South Korea alliance is breaking up. The idiots of the zero-sum game just don’t know when to shape up and accept geopolitical defeat gracefully.
The latter is going to get another taste of their own WTO globalist pie now that South Korean President Moon Jae-in told his cabinet to deal with US protectionist tariffs with “confidence and resolution.”
The newly imposed rates on US importation of South Korean products will go as high as 50%. The new importation rates are meant to punish the country when it decided to march along with North Korean athletes, which is of course a symbolic gesture of the peaceful desire to reunify the Korean peninsula after their Western instigated destruction in the mid-1950s.

President Moon Jae-in called on officials to deal with Washington’s unfair trade measures by considering drastic action, such as taking the matter to the WTO. His remarks come as the U.S. mulls slapping huge import tariffs on South Korean steel.
Be bold and resolute in dealing with unreasonable trade protectionism. That’s South Korean President Moon Jae-in in response to the U.S.’ plans to slap up to 50-percent import tariffs on washers and solar panels… and the Commerce Department’s latest recommendation to President Trump to impose steep curbs on all steel imports from a number of countries: On that list, South Korea.
At a weekly meeting with his top aides on Monday, the South Korean president kicked off the first work day following a long holiday weekend on a stern note against Washington’s move to protect its manufacturers.

“I want you to deal with unfair trade protectionist measures with confidence and resolution. Consider filing a complaint to the World Trade Organization and reviewing whether there are any violations to the Korea, U.S. free trade agreement. Make sure you argue its unfairness in the negotiations to revise the Korea-U.S. FTA.”

This is the strongest word yet from the South Korean president on the U.S.’ stepped up efforts to protect its industries… and it came with a prescription seeking a fundamental solution to the nation’s exports structure.

“We should take this opportunity to speed up our drive for innovative growth to increase our firms’ export competitiveness and diversify our exports market by actively pushing forward the New Northern Policy and the New Southern Policy.”

The New Northern and Southern Policies are strategies introduced by South Korea’s Moon administration aimed at expanding economic cooperation and exchanges with the nations to the north – Russia and Eurasian economies – and to the south… linking South Korea, Southeast Asian nations… all the way to India.

“The South Korean president’s unusually tough orders this week in dealing with the Trump administration’s growing appetite for trade protectionism is noteworthy as the country in question is the United States, an ally key now than ever for President Moon considering the latest change in dynamics involving North Korea.

The Blue House, however, drew a clear line between security and trade affairs, saying the president is adamant on dealing with the two separately taking different approaches for each.

This is just in line with our previous observation that Asia would rather go with the BRICS doctrine of multipolarity than stay with the self-deluded Exceptionalists.
The war economy belongs to the past. Please stand up peace-loving Americans. You deserve the $715 billion budget more than the Pentagon. Nobody is planning to attack anybody.
Make no mistake, your apathy is destroying peaceful countries around the world.
“America First” is more like Military Industrialists First.

10 thoughts on “US-South Korea Alliance is Breaking Up”