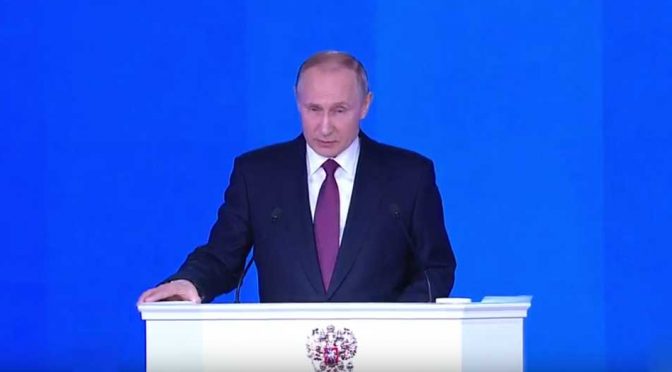 A few hours ago, Russian President Vladimir Putin issued his strongest warning to date against Russian’s perennial adversaries, i.e. US and NATO.
With a blue widescreen as a backdrop, he flaunted his country’s capability to repel any form of military attack and launch decisive countermeasures that should ensure the enemies’ convincing defeat.
At 1h:14m mark…

As can be expected, the Western media will just belittle this warning by saying that Putin has just underlined his administration’s accomplishments so far. But they would be wrong, as Putin is invoking the Russian patriotic fervor once again, as he did in all victory parades commemorating the Russian toppling of the Nazis in WW2.
Putin is not known to talk too much like his “partners” in the West. So, when he showcases, among others, those free energy propelled air and sea drones that are equipped with nuclear warheads, the whole exercise should be something more than just winning a vote in the upcoming presidential elections.
He doesn’t need to do that.

The idea of a nuclear-powered projectile is hardly new. The US tried to develop one as part of Project Pluto in the early 1960s, but abandoned it since strategic missiles with chemical propellants proved to be a more viable alternative. Russia has reportedly made a breakthrough in this technology, becoming the first nation to bring it to maturity.
Putin also said that miniaturization of a nuclear reactor gave Russia another advanced weapons system in the form of a high-endurance underwater drone. The drone can dive “really very deep” and travel between continents at a speed that is several times higher than that of a submarine, a modern torpedo or even a surface ship, he said.
According to the president, such drones can attack enemy aircraft carrier groups, shoreline defenses or infrastructure, and cannot be countered by any defense system in the world. Both conventional and nuclear-tipped versions can be made, he said.
In December 2017, Russia completed the trials of a nuclear reactor which gives the drones such capabilities. The reactor is “100 times smaller” than those used by nuclear-propelled submarines and generates more power, Putin said. It can also reach its peak power 200 times faster than a conventional nuclear power plant.
The video shown for this weapon system didn’t include any actual test, but presumably the claimed miniaturization of a nuclear reactor, which was used for the cruise missile, can also work for a watercraft.
Putin then showcased two variants of a hypersonic weapons systems already developed by Russia. One is an air-launched vehicle that is already deployed in southern Russia for test combat duty. The projectile travels at a speed of Mach-10 and has a range of 2,000km (1,240 miles). The weapon, which is called Kinzhal (“dagger” in Russian) is available in conventional and nuclear forms, Putin said. A video shown to the audience included the moment the weapon was deployed by a fighter jet and the fire from its engine.
Another weapon that is being developed, but which was not shown being tested because its appearance is classified, according to Putin, is a hypersonic glider warhead deployed from space. Russia first tested one back in 2004 and has made significant progress since, the president said. The glider can fly in the atmosphere at speeds of over Mach-20 and can withstand a heat of up to 2,000C (3,632F) generated by air fiction. The system is in series production and is called Avangard (“advance guard” in Russian).
The last weapon system showcased by Putin during his speech was a combat laser, which he said Russia had started to deploy last year. A small video clip showed what presumably is an anti-aircraft laser system, but no test footage was shown.
… “To those who for the last 15 years have been trying to fan an arms race, achieve unilateral advantage against Russia, impose sanctions, which are illegal from the standpoint of international law and are aimed at holding back the development of our country, including in the military area, I have this to say: All the things you were trying to prevent through your policies have already happened. You have failed to hold Russia back,” Putin said.
“You now have to acknowledge this reality, confirm that everything I said is no bluff – which it isn’t – think for some time, send into retirement the people stuck in the past and incapable of looking into the future, [and] stop rocking the boat that we all ride in and which is called planet Earth,” he said. Russia would be responsive if talked to as an equal partner, Putin added.
https://www.rt.com/news/420206-russia-strategic-weapons-putin/

The emphasis on cutting edge weaponry in this particular annual speech marks a pivotal point where Russia will not tolerate Western two-faced geopolitical gameplays anymore.

Even the special mention of the hero pilot who detonated his last grenade while surrounded by CIA Al-Nusra Front jihadists, should send a clear message to all US military personnel today.
“They don’t have pilots like Major Roman Filipov.”
Indeed, all they have are disillusioned Rambos.
Now, add this to China’s impending inauguration of a Yuan-based oil stock exchange, 24 days from now…

On March 26, the petrodollar will begin its funeral march to oblivion as the Shanghai International Energy Exchange…

… and you have a perfect storm for the Khazarian Mafia.

20 thoughts on “Listen to Us, Now! Putin issues Ultimatum vs. US/NATO”