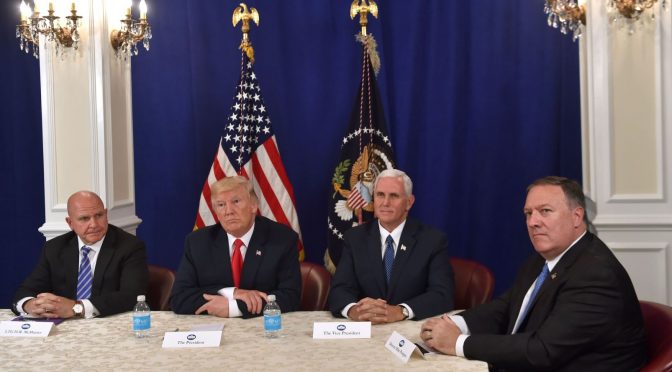 Pompeo is expected to be tough on Iran, but willing to compromise with North Korea. After all, the incumbent South Korean government of Moon Jae-in got its overwhelming mandate when it promised to finally have peace with the North, whether with the blessing of the US, or not. Credit grabbing by the White House has been the rule, rather than the exception.
However, as a matter of consequence, the Agency will be led by the “Godmother of Torture” Gina Haspel. This means that the US intervention in Syria will not go quietly into the night.
Which brings us to the question: Is the Pentagon audit a mere charade?

Last December, the Pentagon announced the first ever auditing of the department. Since 2001, the DoD could not account where the US$9 trillion went.
Defense Department Comptroller David Norquist announced the start of the DOD’s first-ever audit amid concerns of an impending government shutdown.
Beyond the obvious accounting of assets—an estimated $2.4 trillion worth, including everything from infrastructure to personnel to weapon systems—an audit will create opportunities for careful consideration about the best use of military dollars. Even if the accounts show that every single penny that goes into the DOD is spent mindfully, wisely, and efficiently, there’s still cause to debate the ends that those pennies enable. The audit doesn’t obviate the need to have these discussions—it should spark them.
Hopefully its findings will also expose some of the waste, fraud, and abuse that Congress cites as problematic. The Department of Defense is a government agency and bureaucracy—a highly respected and exalted institution—but prone to the same inefficiencies that plague the EPA and Department of Interior, for example. Until now, the DOD successfully evaded opening its books, with critics citing concerns that such scrutiny could expose national-security secrets. Others warn that an audit could undermine our troops by compelling them to divert attention away from core missions.

… It’s worth bearing in mind, however, that auditors won’t likely uncover new inefficiencies of a great magnitude. Some of the Pentagon’s worst examples of wastefulness are already common knowledge. A $125 billion bureaucratic waste report (albeit with questionable methodology) made headlines this time last year. The General Accounting Office regularly reports on the Pentagon’s struggle to produce weapons systems in a timely fashion. One of the largest single line items in the budget, the F-35 Joint Strike Fighter program, has been plagued by everything from software struggles to production delays to cost overruns. Some muse that the entire enterprise might be a $1 trillion mistake. Similarly, the Littoral Combat Ship program has long been associated with inefficiency. Its new acquisition strategy doesn’t seem to be making things better. The worst of the worst in the DOD’s gargantuan budget will likely be the things that policymakers and the public already know about…

Nobody is threatening to war with the US, yet the war industry still able to find ways to create enemies out of everyone it can’t control. They are now blaming Russia for starting a new arms race. But it was the US who pulled away from the START agreement which could have paved the way for mutual reduction of offensive and strategic arms.

START (Strategic Arms Reduction Treaty) was a bilateral treaty between the United States of America and the Union of Soviet Socialist Republics (USSR) on the reduction and limitation of strategic offensive arms. The treaty was signed on 31 July 1991 and entered into force on 5 December 1994.[1] The treaty barred its signatories from deploying more than 6,000 nuclear warheads atop a total of 1,600 inter-continental ballistic missiles (ICBMs) and bombers. START negotiated the largest and most complex arms control treaty in history, and its final implementation in late 2001 resulted in the removal of about 80 percent of all strategic nuclear weapons then in existence. Proposed by United States President Ronald Reagan, it was renamed START I after negotiations began on the second START treaty.

Today, more than a thousand of combined NATO and US military bases are encircling China, Iran and Russia. But all of the latter is considered to be the aggressor. This baseless rhetorics from the CIA-controlled mainstream media will be enhanced further now that Mike Pompeo is broadcasting directly from inside the White House.

Trump has just imposed a 25% import tariff and 10% tariff on steel and aluminum to reduce importations from China. This is supposedly in line with his “America First” doctrine. However, China could easily retaliate by releasing its more than a trillion US dollar denominated treasury bills. Couple this with the impending inauguration of a Yuan-based oil exchange market this March 26th, and the illusion of Western superiority in this department will be shattered for good.
Wait, Russia and China are already doing exactly that…

Moscow and Beijing have cut their holdings in US Treasury securities. Russia sold $5.3 billion in January and has sunk to 16th place of the largest holders of American debt.
It is the lowest level for the country since February last year.
“We absolutely do not hold American securities exclusively. The main thing is that these securities should be liquid. So should be the state that issued them,” said Russian Finance Minister Anton Siluanov in an interview with NTV this week.
Russia also invests in the securities of European countries.
“We are ready to invest in the securities issued by other sovereign states, the main thing is that they should be low-risk and accordingly bring income,” Siluanov said.
China also got rid of American debt by selling nearly $17 billion in January. Although China is still the largest holder of US Treasuries, the total amount of Treasuries in its reserves has dropped to a minimum since July last year.
One of the largest investors in US government bonds remains the Cayman Islands. The small tax-friendly country has invested almost $242 billion in the American debt, on par with a holder as large as the United Kingdom.
The third-largest buyer of American debt is Ireland, investing $327.5 billion in US debt securities. Ireland is also considered a tax haven for American companies, and was involved in the Apple Inc. tax scandal.
https://www.rt.com/business/421498-russia-dumping-us-treasuries/

This may be Trump’s way of pulling China to a negotiating table and extract more concessions from the former. He has also stop the free flow of high technology to China, by way of halting mergers of Chinese and US companies. It’s a bit too late for that. German companies are already collaborating with Chinese counterparts for much needed funding.

Adopting to the world of multipolarity is always hard for a former hegemon, as much as it is hard for the White Men to leave South Africa alone to its original settlers. They are still thinking that they are better stewards for the colored peoples around the world. How can they be when they are only looking out for their own interests?
There is a far better outcome when Asia’s wealth is merged with Western science, as much as all occupied lands must be returned to its rightful owners. Both must be done to institute social justice and long term peace.
Any effort towards that direction will be for naught if the Deep Swamp is still in control of the White House.

6 thoughts on “A Mixed Bag of Trump”