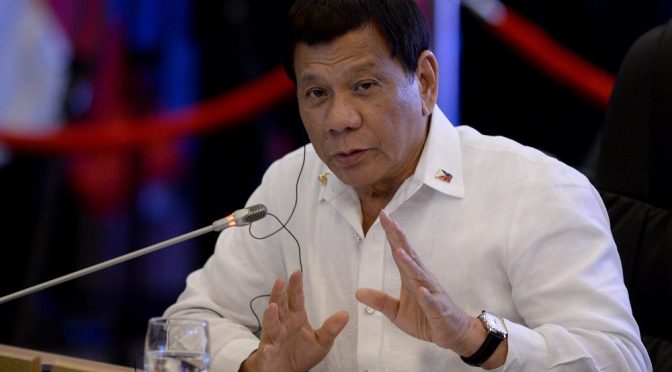 With the power vested on the Philippine president Rodrigo Duterte, a formal statement of withdrawal of the country’s membership in the International Criminal Court was issued a day ago. This culminates the persistent politicization of the Deep State supposed “Court of Last Resort” investigations into the Philippine drug war and decisive anti-Deep State actions.

The Deep State’s desperate action to undermine the Duterte government is borne from the massive congressional investigations of the treasonous crimes of the past administration, to wit:

Omidyar’s Rappler.com was recently shut down by the Philippine Securities and Exchange Commission, for violating the anti-foreign ownership rule. Philippine media can only be owned by the Filipinos.
All Duterte critics who are imputing the SEC’s motu propio action as a blatant “suppression of press freedom” won’t fly on this one because all commissioners were appointed by the Deep State Aquino government that Duterte assumed office from.

Recently, the Deep State Supreme Court Chief Justice was forced to undergo on an indefinite leave after being exposed as having failed the psychiatric evaluation prior to her entry to the highest court of the Philippines and the failure to pay the right taxes owed to the government.
She also failed to submit her own SALN (Statement of Asset, Liabilities, and Net Worth), which was also the basis of the Deep State’s impeachment of her predecessor.

Let it be known that the action of the Supreme Court justices, when they kicked out an unqualified chief justice, was of their own accord and not under the dictate of the president. At most, they may have taken the cue from the president’s independent foreign policy.

Last December, Duterte refused to accept the much needed EU aid that is one of the tools used in the latter’s meddling in the country’s domestic affairs.
The Philippines is home to a band of Jesuit-controlled families that were effectively sidelined by the rise of a Rodrigo Duterte. The local oligarchy is being made to pay back taxes ranging in the billions, and forced to return the properties of the government that were acquired covertly for free, or through shady bank loans.
But the Duterte government is not just about running after the tax evaders and drug lords, or shaming the church hierarchy. This June’s opening of classes, college students will enjoy free public and private education. The only condition being is for the student to complete the first course on time.
More budget were also allocated for the retirees, and those who are within the poverty threshold and cannot afford medical care.
Mass housing projects were already started for the soldiers and rebel returnees, alike. The latter will also undergo a skills training for the massive infrastructure projects in the next 4 years.

That is how the Duterte government is winning back the communist cadres, while the Jesuit coadjutor Jose Ma. Sison, godfather of the communist movement, is retiring in comfort at the Netherlands with the proceeds of cadres’ extortionist attacks in the countryside.

The Duterte government is hoping that with the New People’s Army’s full neutralization, and the granting of an expanded BangsaMoro homeland, the CIAs low intensity conflict (LIC) can be neutralized also, and the 6-decade long march towards peace can be achieved before its term ends in 2022.

Creating jobs at home will encourage the overseas workers to come home and participate in the country’s first ever multi-billion dollar BUILD BUILD BUILD infrastructure program.
This is grossly in conflict with the Deep State’s desire to DESTROY DESTROY DESTROY countries to their subservience.

That is why Duterte needs to be ostracized, at all cost. So far, all they got is a blowback. In fact, most of the local pundits already know that ICC is funded by George Soros.
They know that the accusation about crimes against humanity won’t apply to Duterte, but to its accusers only.
The more the Deep State demonizes the Philippine president, the stronger his mass support goes. Proof of this is his 80+ popularity across the full spectrum of the Philippine society, which is the highest for an elected official in the country and when compared to his EU counterpart-critics.
Interestingly, the US, Russia and China have not signed the ICC treaty. All international laws can be weaponized through selective enforcement.
With the Philippine withdrawal from the Rome Statute, the Deep State’s desire for putting Southeast Asia under its thumb is officially defeated.
If the ICC is not investigating the Bushes for their crimes against the people of Iraq, or Obama and Zarkozy for the destruction of Libya, then why should we respect the ICC’s questionable action to investigate Duterte?
There are more than a thousand cases filed at the ICC, but why would Duterte’s protective actions against the druglords take precedence?
With all of the foregoing anti-Deep State events around the world, more false flag operations and other desperate measures can be expected.

9 thoughts on “Duterte Formally Withdraws from the Deep State ICC”