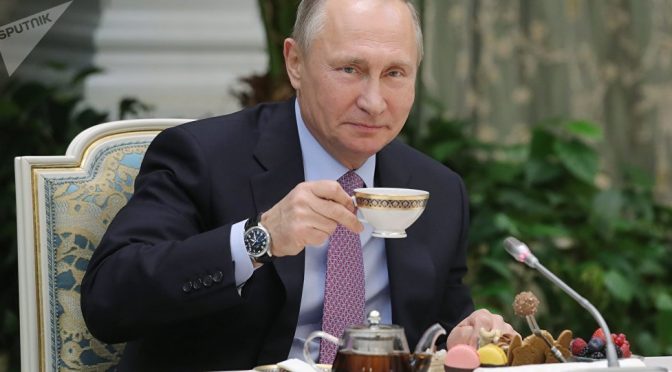 Russian President Vladimir Putin got an overwhelming vote in this year’s election. This is in spite of the desperate poisoning false flag using double agent Sergie Skripal by UK henchman Christopher Steele, the author of the “Russian Dossier” on Trump.
In the run up to the election, both Russia and UK expelled the other camp’s diplomatic personnel. The aggressor UK is yet to substantiate its claim that it was Putin who supposedly ordered the use of nerve agent against the Skripals.

by Barbara Boyd, [email protected]
This statement explores the strategic significance of major events in the world starting in February of 2018. Our goal is to precisely situate Theresa May’s March 12–14 mad effort to manufacture a new “weapons of mass destruction” hoax using the same people (the MI6 intelligence grouping around Sir Andrew Dearlove) and script (an intelligence fraud concerning weapons of mass destruction) which were used to draw the United States into the disastrous Iraq War. The Skripal poisoning fraud also directly involves British agent Christopher Steele, the central figure in the ongoing coup against Donald Trump. This time the British information warfare operation is aimed at directly provoking Russia while maintaining their targeting of the U.S. population and President Trump.
As the fevered war-like media coverage and hysteria surrounding the case makes clear, a certain section of the British elite seems prepared to risk everything on behalf of their dying imperial system. Despite the hype, economic warfare and sanctions appear to be the British weapons of choice. Putin, as we shall see, recently called the West’s nuclear bluff. With their Russiagate coup against Donald Trump fizzling, exposing British agent Christopher Steele and a slew of his American friends to criminal prosecution, a new tool was desperately needed to back the President of the United States into the British geopolitical corner shared by most of the American establishment. The tool is an intelligence hoax, a tried and true British product.
According to the British spy tale, a former Russian military intelligence colonel, Sergei Skripal who spied for Great Britain in Russia from the early 1990s until 2004 was poisoned, along with his daughter, on March 4 in Salisbury, England, using a nerve agent “of a type developed by the former Soviet Union.” In 2010, Skripal had been exchanged in a spy swap between the United States and Russia. He had served six years in a Russian prison for spying for Britain. He had been living in the open in Britain for the last eight years. Skripal’s MI6 recruiter and handler, Pablo Miller, listed himself as a consultant to Orbis Business Intelligence, Christopher Steele’s British company, on his LinkedIn profile. When the Telegraph called attention to the Orbis reference, it was removed from the LinkedIn profile. Steele, who worked on the Trump dossier through his company Orbis, has denied that Miller worked directly on the Trump dossier.
Theresa May and her foreign minister Boris Johnson insist there is only one person who could be responsible for the poisoning, described as an act of war, and that is Vladimir Putin. No evidence has been offered to support this claim. In fact, there is a substantial doubt whether the putative nerve agent, Novichok, even exists. No plausible motive has been provided as to why Putin would order such a provocative murder now, ahead of the World Cup, when the Russiagate coup against him in the United States has lost all momentum. Rather than following the protocols of the Organization for the Prohibition of Chemical Weapons, which require that evidence of the alleged agent be presented to Russia, the eccentric and unpopular May instead delivered an ultimatum to Russia and whipped up war fever throughout the UK. She now seeks to pull Donald Trump and NATO into ever more aggressive moves against Russia.
Thus, just like Christopher Steele’s dirty dossier against Donald Trump, the British claims against Putin are an evidence-free exercise of raw power. The Anglo- American establishment instructed us, with respect to Steele: “trust him, ignore the stinky factless content presented in this dossier, just note that he is backed by very important intelligence agencies who could cook your goose if you object.” The same can be said for Teresa May’s crazed assertions now.
A short statement of the reasons why the British are now staging the Skripal provocation can be found in a March 14 London Sunday Telegraph call to arms by Allister Heath, who rants: “We need a new world order to take on totalitarian capitalists in Russia and China… Such an alliance … would dramatically shift the global balance of power, and allow the liberal democracies finally to fight back. It would endow the world with the sorts of robust institutions that are required to contain Russia and China… Britain needs a new role in the world; building such a network would be our perfect mission.” Across the pond, as they say, a similar foundational statement was made by 68 former Obama Administration officials who have formed a group called National Security Action, aimed at securing Trump’s impeachment and attacking Russia and China.
… Russia and China have embarked on a massive infrastructure building project in Eurasia, the center of all British geopolitical fantasies since the time of Halford MacKinder. Moreover, China’s Belt and Road Initiative now encompasses more than 140 nations in the largest infrastructure-building project ever undertaken in human history. This project is a true economic engine for the future, while neo-liberal economies continue to see their productive potentials sucked dry by the massive mound of debt they have created since the 2008 financial collapse. This debt is now on a hair trigger for implosion. It is estimated by banking insiders that the City of London is sitting on a derivatives powderkeg of $700 trillion with over-the-counter derivatives accounting for another $570 trillion. The City of London will bear the major impact of the derivatives collapse.
In this strategic geometry, President Trump’s support of peaceful collaboration with Russia during the campaign and his personal friendship with President Xi, marked him for the relentless coup against him waged by the British and their U.S. friends.
On top of that, President Putin delivered a mammoth strategic shock on March 1, showing new Russian weapons systems based on new physical principles which render present U.S. ABM systems and much of current U.S. war-fighting doctrine obsolete, together with the vaunted first strike capacity with which NATO has surrounded Russia. Not only is the West sitting on a new financial collapse; its vaunted military superiority has just been flanked.

Likewise, China President Xi Jinping virtually obtains indefinite term extension as the ““great helmsman” for China, owing to his decisive war on domestic corruption, and independent foreign policy. This means that the West needs to deal with the reality that the current geopolitical trajectory away from their favor will continue indefinitely, too.
In fact, even a small country and longtime colony, i.e. the Philippines, is asserting its sovereignty by refusing the Deep State ICC’s selective human rights intervention in the country. The weaponization of the international courts and treaties has always been the phase following a mass media demonization campaign against any uncooperative leadership.
While we are looking at this ongoing tit for tat geopolitical maneuvers, we must not be distracted away from the ongoing digitization of the economy and the continued mass surveillance on all our online activities.
Instead of succumbing to fear of retaliation by attenuating our offensives against the Old Paradigm, we can overload their system instead, by flooding the cyberscape with the true interpretation of the events of the day.
Thank you for all your emails of support and lively comments.