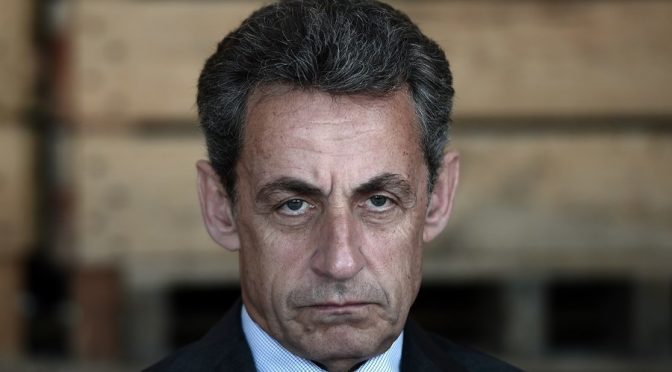 French prosecutors charged the former French president Nicholas Sarkozy for accepting funds from the murdered Muammar Gadhafi, for his own presidential campaign. Presidential campaigns are one of the ways one can solicit funds from international donors in exchange for sacrificing his own country’s interests.
Although, in the case of Sarkozy, he may not have actually sold out French interests in favor for Gadhafi’s Libya. But he was one of those who spearheaded the establishment of a no-fly zone and NATO bombings of Libya in 2011.


“Prosecutors charged former French President Nicolas Sarkozy with accepting illegal campaign contributions from Muammar Qaddafi’s regime in Libya before the 2007 French election, according to a person in a Paris prosecutor’s office familiar with the matter.
Sarkozy was charged after having been in police custody since Tuesday morning for questioning by a special financial crimes unit, according to the person, who asked not to be identified because the process is confidential. Sarkozy has denied the allegations. In France’s criminal justice system, charges are brought during an investigation, before a decision is made on whether the matter will go to trial.
The 63-year-old isn’t the first former French president to be caught up in legal troubles, though his case is probably the most serious. His predecessor Jacques Chirac was found guilty in 2011 of offering false jobs for party members while mayor of Paris. He was given a two-year suspended sentence.
Sarkozy has been the target of several criminal investigations since he left office in 2012. In 2014 he was charged with influence-peddling for alleged efforts to have judges keep him informed about the state of play in some of the probes. An investigative judge decided in February 2017 to send him to trial on charges that he used false receipts to illegally exceed campaign-spending limits in his failed 2012 re-election bid. Both cases are still pending.
Investigative judges began tapping Sarkozy’s phone in 2013 as part of the investigation into whether he received funds from Qaddafi’s regime. That surveillance led to the influence-peddling charges. This week was the first time Sarkozy had been questioned in the Libyan case, much of which relies on claims by former members or associates of Qaddafi, who was killed in 2011 by France-backed rebels.”

Perennial backstabbing is the main cause of distrust and hatred against White folks in the Middle East, e.g. overthrow of Saddam Hussein in Iraq after being used to fire Scud missiles on Iran, CIA Osama bin Laden as the bogeyman in the War of Terror after he died in a US hospital in Saudi Arabia.
Anyway, just as Sarkozy was hauled into jail, Muammar Gaddafi’s son, Saif Al-Islam emerges from a long seclusion and is slated to run in this year’s presidential election that will reunify Libya for good. This is because, those who survived the NATO bombings and the rebels who were once supported by the US-NATO alliance are now realizing the folly of siding with the latter.
Now that they were able to compare the situation during the Muammar Gadhafi’s rule and that of the West, more Libyans are now pushing for Gadhafi’s son to lead them instead.

The blowback against the Deep State continues to unravel such that  they are now ready even to sacrifice their own surveillance tool Facebook just to get to Trump, who congratulated Putin’s reelection and is copying the anti-illegal drug policies of Duterte.
As for Duterte, the ICC just sent a message pleading Manila not to push through with its withdrawal from the International Court of the Criminals, or ICC.
Both China and the Philippines have recently agreed on the legal framework to jointly explore and extract natural gas reserves in the disputed areas in the Spratly Islands.