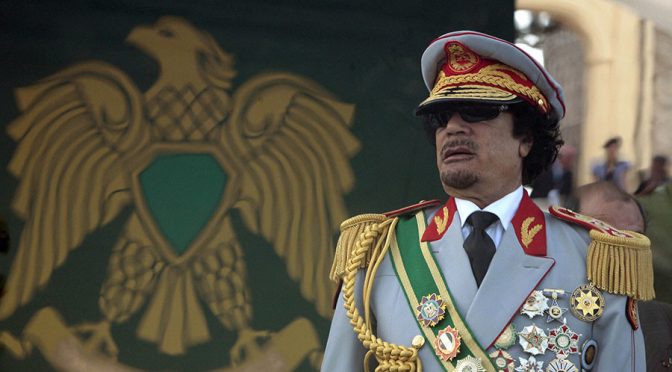 Muammar Gaddafi wanted to shatter the dominance of the greenback in the Middle East by introducing gold-backed dinar, but failed. China has a chance to finish what she started, one industry expert has told RT.
“Ideas related to oil trade in currencies other than the dollar arose more than once. Some of them were severely suppressed by the United States, one example is Muammar Gaddafi, who proposed the introduction of a regional currency gold dinar and trading oil in the Middle East in this currency,” Aleksandr Egorov, foreign exchange strategist at TeleTrade said.
However, this time, an attempt to oust the dollar could be successful. China has launched oil futures backed by yuan, and Beijing has what Gaddafi didn’t, according to the expert.

“Along with the Chinese role in the global economy and the growing interest in the renminbi, China is also protected by a nuclear shield. It can afford to try to shatter the monopoly in oil trade. This will give even more weight to the Chinese yuan. In addition, China’s economy is the world’s largest consumer of oil, and consequently, all world producers of raw materials will have to reckon with the strategy of the Chinese authorities,” Egorov said.

According to the analyst, the timing for the launch of the petro-yuan is perfect. Key oil producers Russia, Iran and Venezuela are under pressure from US sanctions, and it is a good moment for them to ditch the dollar in oil trade and substitute it with the yuan.
Mikhail Mashchenko, an analyst at social network for investors eToro, agrees.

“From the point of view of Russia’s geopolitics, it is certainly beneficial to reduce the role of the dollar in foreign trade. And it has been done, let’s recall the record growth of the country’s gold reserves. The other states that are constantly under the threat of new sanctions, like Iran and Venezuela, can profit, too. The contracts in RMB will allow to trade oil without US approval.”

Both analysts agree that it will take time before the petro-yuan can become a real threat to the dollar. China needs to win the support of the world’s largest oil producers Russia and Saudi Arabia, or the initiative is doomed, says Mashchenko. He added that the yuan is fully controlled by Beijing, which could also spook potential investors.

The historic launch of the long-awaited trading of Chinese crude futures this week has stirred up a heated debate among analysts as to whether the new commodity product will prosper or flop.
Some market analysts expressed doubts over the success of the petro-yuan, citing Beijing’s yearning for total control over trading as one of the key reasons for a potential bust. “The government has been eager to encourage liquidity and paper trading, but of course the issue with paper trading is speculative trading that the government wants to keep at bay,” Michal Meidan, an analyst at energy market consultancy Energy Aspects, told Bloomberg prior to the launch.
Meanwhile, the high costs of oil storage for delivery into the Shanghai Futures Exchange may scare potential investors away from the new contracts, according to industry analysts. “Storage plays a crucial role in linking cash and futures markets. Many speculators, such as proprietary traders and hedge funds, may be scared away,” said Jian Yang, a research director at the JP Morgan Center for Commodities in the University of Colorado Denver, as quoted by the agency.
However, China’s yuan-backed oil futures managed to make a strong debut on Monday with overnight trade volumes initially outstripping transactions of internationally recognized benchmark Brent. Some 62,500 contracts reportedly changed hands during the first session, as domestic and international oil investors joined the trading.
The impressive start gives deeper cause for optimism about the newcomer with some analysts qualifying oil futures denominated in China’s currency as a game-changer in the world of financial trading.

“This is the single biggest change in capital markets, maybe of all time,”

… said Hayden Briscoe, APAC head of fixed income at UBS Asset Management, as quoted by Reuters.
According to the analyst, the move to trade oil in yuan will diminish the role of the greenback in global financial markets. If market participants, including US corporations, opt to trade yuan-backed contracts, this could easily strengthen the Chinese currency and, at the same time, weaken the dollar.
“This helps cement the exchange’s viability and challenges the petro-dollar system, in which oil deals are executed in dollars. This would decrease demand for the greenback and boost US inflation,” Briscoe said.
With crude oil becoming a great chunk of modern international commerce, the potential impact of the new product on oil market dynamics and on global monetary and financial systems could be correspondingly great.

The Chinese government has been offering a win-win cooperation with the West. Now, it is tired of dealing with the constantly shifting positions of the British Empire. The critics, of course, will never ran out of issues including China being part of the Old Paradigm. But how can we exactly transition to a resource-based society if not by first laying down the groundwork which should make the current system irrelevant?
If we transition to the resource-based economy overnight, do we still have people working in the farm lands and power plants tomorrow? Or, do we need to establish the autonomous systems first which will make these tedious jobs obsolete?
Don’t we need to build the nuclear power plants first, so we can make available the free energy that the households and automated systems need to power on with?
Or, do we prefer the one-time dole out of the so-called prosperity programs like NESARA, which even Trump is not heard to even mention about?
Social designs like the Venus Project needs a peaceful transition from our existing hierarchical setup, and it is in fact the unavoidable consequence when the RIC Alliance has fully implemented its relevant technologies, e.g. transmutation of elements, hybrid nuclear fusion-fission power, and plasma technologies, without the constant interference of the West.

We judge best when we try to condemn just for the sake of condemning that which we don’t fully understand. It is absolutely wrong to analyze the actions of the leaderships in the East with the same mindset prevalent in the Western culture.
The East talk a lot less than their Western counterparts, but they do the necessary work diligently.
The desire for total dominance is never acceptable for the Orientals, and that is very visible in the attitude of the Chinese engineers facilitating the transfer of construction technology to the Africans, as shared in the last article.
Negative appreciation about what China is presently doing can only come from false pride.