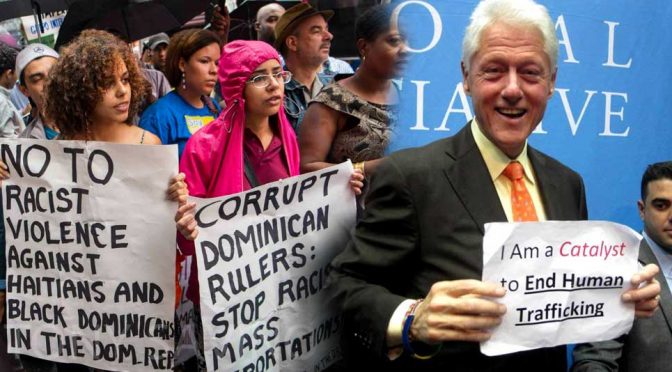 Haiti was struck by a manufactured disaster back on 12 January 2011 to pave the way for US ground invasion, NGO exploitation, and the corporate systematic plunder of its natural resources including gold. Of the billions that the concerned people of the world gave to Red Cross, the humanitarian agency was only able to build 7 houses for the Haitians.
No sources of potable water were ever developed out of the $13 billion raised by the Clinton Global Initiative either. Indeed, the Clintons have adapted themselves well from their Vatican masters, who themselves have the habit of sucking in most of what goes into their own Red Cross, of course.
Even the UN admitted to have a role in the outbreak of cholera in Haiti that killed 10,000 people. This is in addition to the more than 200,000 deaths during the earthquake.


The highly venerable Oxfam, on the other hand, has its field CEO raping underage victims of the disaster, while the Western media are calling the victims as mere “prostitutes” in an effort to shift the blame away from the pedophiles, begging the question, who are the real whores in the whole Haiti disaster event?
Please listen to the full interview of Ezili Danto, a Haitian human rights lawyer expert on the subject.

The Deep State’s success in Haiti Earthquake 2010 provided the strong impetus for the $70 million tsunami extortion in Japan, more than a year later.