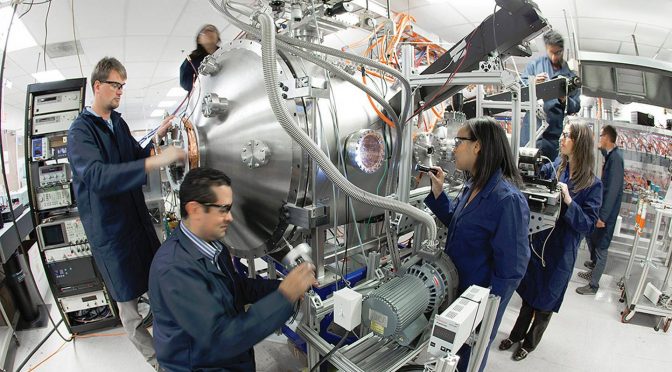 When Martin Fleischmann and Stanley Pons stunned the world with their room temperature cold fusion apparatus in 1989, the authorities quickly intervened due to a real threat to its “national security,” a coded phrase for Military First.
Consequently, in the immediate aftermath of Putin’s Ides of March speech, the West started capitalizing it by manifesting its desire for an increased military budget, as if what they already have is not high enough. The provocation against the Russians is paying off. They have created the justification to bleed its citizens even more.
Reports said that,
Lockheed Martin is developing a new nuclear fusion reactor like no other. The US defense contractor says that the reactor is no bigger than a shipping container, but could power 80,000 homes.
What once was the provenance comic books — a super-compact, high-powered fusion reactor — is now becoming a reality, and soon Bruce Wayne and Tony Stark could see their might matched by none other than Lockheed Martin. But instead of powering the Ironman suit or Gotham City, Lockheed’s reactor is expected to make waves in the realm of everything from aircraft carriers to spacecraft.
The company’s patent, discovered March 28, also contains a drawing of an F-16 jet, signalling Lockheed even sees an application for the reactor in fighter aircraft.
One of Lockheed Martin’s reactors is reportedly powerful enough to produce sufficient energy for an entire Nimitz-class aircraft carrier used by the US Navy, such as the USS Ronald Reagan. Presently the carriers require two Westinghouse nuclear fission reactors for power. It’s so powerful, the defense company estimates that just 25 pounds of fuel could run the reactor for an entire year, non-stop, and generate a constant 100 megawatts (MW) of energy during that period
The device is reportedly far safer, cleaner, powerful and more compact than existent fission nuclear systems, which split atoms to release energy instead of fusing them, as this reactor does.
“The nice thing about a fusion reaction is that if somehow it would go out of control, it would just stop itself automatically,” Saskia Mordijck, who studies magnetic confinement fusion plasmas at the College of William and Mary, said in 2012, adding that it’s much safer than fission reactions, which can cause nuclear meltdowns if their careful control mechanisms are damaged or shut down.

he US government is able to classify and remove from public view patents that they believe pose a national security threat. That they have not done that with Lockheed Martin’s new reactor could mean that the system is still very immature in its development, according to The Drive. Nonetheless, the defense contractor’s advanced projects arm, Skunk Works, has been working on the reactor since the company announced the project in 2014.

Newly-awarded patent for Skunk Works engineer shows design of compact fusion reactor, with a drawing of an F-16 included as a potential application. Testing of a prototype reactor is underway in Palmdale. https://t.co/yJuc3gfSib pic.twitter.com/aYhGhsba65

Scientists have been working to develop a practical fusion reactor since the 1920s.
A fission reaction releases energy by splitting large atoms like uranium or plutonium, radioactive elements that are inherently dangerous. The fission process that can become self-sustaining under certain conditions. A fusion reaction occurs when two smaller atoms, like hydrogen, for example, which are not necessarily dangerous on their own, are fused into a single larger atom, such as how the sun creates heat and light. That fusion of atoms releases more energy than their fission does, and can theoretically be done in smaller quarters.
An electricity-generating fusion plant has never before been constructed and the only controlled fusion reactions have been hydrogen bombs, also called thermonuclear bombs.

So, the earlier talk about a Star Trek future is never gonna happen while the military industrial complex still exists.
It is imperative that the entire cabal be neutralized for good, physically.

8 thoughts on “Cold Fusion is Here, But…”