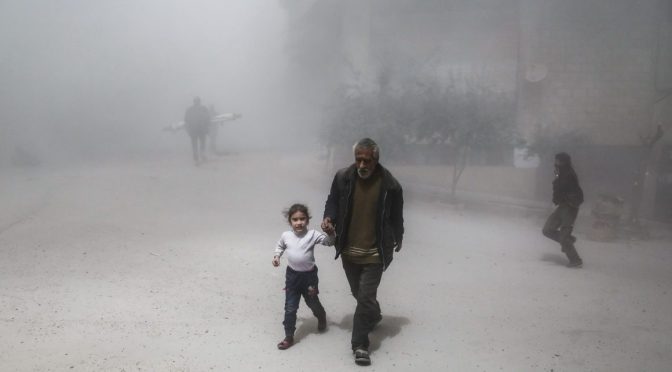 In spite of what Trump is saying about “US withdrawal from Syria”, the events on the ground have the potential to start the last war of our species. In fact, it they are happening under different leaderships both in China and Russia, it may have started a few years back, when China was hit with a tactical nuke, or when three of Russia’s ambassadors were assassinated, one after the other, in a span of two months.
Now, the Deep State continues to instigate conflict by blaming Russia as responsible for another chemical attack in Douma, a major city in the Ghouta region.

Journalism in the west is dead. SkyNews & many others in MSM are reporting that the #Syria/n govt used chemical weapons in #Douma when there is not a shred of evidence to support it. A journalist asks questions. He doesn't parrot a terror affiliated sourcehttps://t.co/EkwODrZDR6

A bigger war is the only way out for the bankers whose decades of scheming is finally ending.

Another chemical attack in Syria: But why is the corporate media missing crucial points?

DUMA, Syria – The last terrorist-held bastion of East Ghouta to the east of Damascus city center, Duma, has been devastated by a chemical weapon attack that has killed at least 70 people.
The majority of the victims were women and children.
However, characteristically and typically, the mainstream media have immediately blamed the Syrian military for the dreadful attack even before investigations can occur. Their sources?
The White Helmets and Jaish al-Islam.


Let’s first deal with Jaish al-Islam. The media have used Jaish al-Islam for information on the attacks, but how can a group who openly and proudly publish photos of them caging women to be used as human shields as they launch endless mortar and rocket attacks against civilians in Damascus be trusted?
Or how can this same media trust reports coming from a terrorist group whose founder and former leader openly praised Osama bin Laden, the same person blamed for the famous 9/11 attacks that killed nearly 3000 US citizens?
So with it established that Jaish al-Islam are a radical terrorist group who praise Bin Laden and have no qualms in using women as human shields, why is the possibility that they could have been responsible for this latest chemical attack not considered?
It was reported by journalist Sharmine Narwani who was on the ground in East Ghouta just last month that the Syrian Army liberated “Eastern Ghouta farmlands between Shifouniyeh and Douma and discovered a well-equipped chemical laboratory run by Saudi-backed Islamist terrorists. Not a single Western reporter showed up to investigate the facility.”
Her report goes into further details and provides photos of the laboratory. Why is it such a farfetched idea to the corporate media that the terrorists could have conducted this latest atrocity?
Then, the second and quoted source for the reports are the White Helmets. I am not going into detail why they are an unreliable source as this has already been done in great detail by other journalists such as Vanessa Beeley. However, it must be questioned why the White Helmets who claim to be neutral only operate in areas controlled by terrorist organisations such as Jaish al-Islam and Al-Qaeda affiliated Al-Nusra Front, or why their members often change uniforms between the white helmet and militant uniforms. 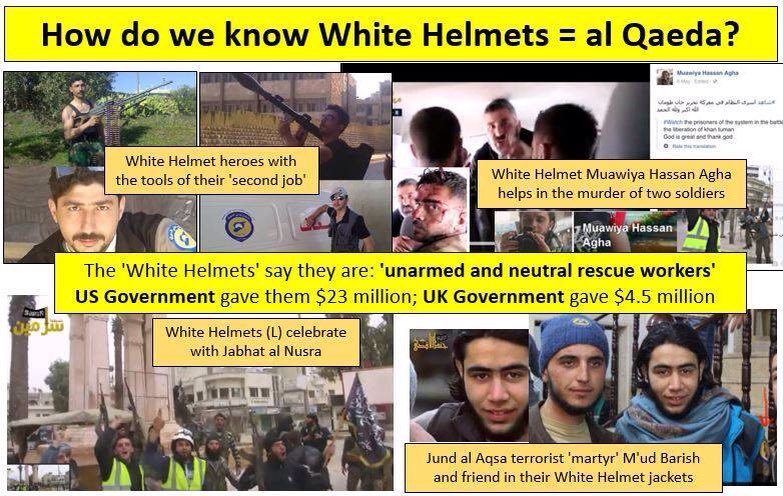 So we come to the terrible conclusion that the corporate media are relying on two organizations who are ideologically inspired and/or aligned with Al-Qaeda. Yes, let us repeat that again, the main source for the corporate media are two organizations aligned with Al-Qaeda.
But does this prove the Syrian government did not conduct the chemical weapon attack? Of course it does not, but we must question why the Syrian military would resort to such a drastic measure. There was no clear strategic advantage to deploy such weapons.
The Syrian Army in a little more than a month liberated over 90% of the East Ghouta pocket with ease, so why at the final hurdle with every advantage in their favor, would they resort to chemical weapons. The corporate media portrays the Syrian authorities as acting irrationally without thought to consequences, but rather, there has been many examples where Syria could have deployed such weapons to preserve their own soldiers, but has opted not to and risked further casualties to ensure that civilians face minimal harm in any operation.
We must also question why the Syrian air force never put their alarm systems on red alert if they had conducted such an attack. US President Donald Trump has proven he is willing to conduct missile attacks against the Syrian military when mere accusations that it conducted chemical weapon attacks has occurred as the the raid on the Shayrat Airbase on April 6, 2017 just days after the Khan Sheikhoun incident demonstrates. This would be a careless move by the Syrian government, especially just days after Trump announced he wants to withdraw the US military from Syria.
It is known the deep state of the US does not want a military withdrawal from Syria; such an incident could force Trump to stay in Syria despite his openness that he does not want this.
In addition, we must also question why these attacks always seem to kill women and children and never terrorists. The Syrian military takes every precaution that civilians are not killed, so much so that the Syrian government for weeks has been trying to bring a peaceful resolution to Duma, even allowing terrorists to take up amnesty with zero repercussions for their crimes or to be transported to another part of Syria with guaranteed safety, just as their allies in Harasta and other parts of East Ghouta successfully took up.
This same terrorist group has kidnapped civilians from the nearby town of Adra, caged women to be used as human shields, openly praise Bin Laden and refused civilians to evacuate Duma, but all of a sudden we cannot think of the possibility that they gassed women and children to force an international intervention in Syria, especially after US officials have openly said they not tolerate such attacks and are willing to conduct strikes even before investigations have been conducted as the attack against the Shayrat Airbase demonstrates.
We also cannot forget that the Russian and Syrian governments in recent times have both said that terrorists in East Ghouta were preparing a chemical attack. This of course has been omitted from the corporate media’s report on this latest incident.
Therefore, before blame can be assigned, we all must wait for investigations to be done. That is to say if investigators are willing to go into Duma under control of Jaish al-Islam to do their report. We know after Khan Sheikhoun, despite all the blame put on the Syrian government, investigators refused to go as it was controlled by Salafi terrorists, just as Duma is.
Paul Antonopoulos is a Research Fellow at the Center for Syncretic Studies. He has an MA in International Relations and is interested in Great Power Rivalry as well as the International Relations and Political Economy of the Middle East and Latin America.

The Syrian Army today has freed the prisoners of war after 4-6 years under Deep State terrorists’ captivity.

All women & children held in #Douma prisons for 4 years now liberated by the Syrian army. pic.twitter.com/YeaWEa5aYY

Every minute more women & children are reunited with their families after being liberated from #Douma terrorist prisons! The army had to use a basketball court in Damascus to welcome them all..! We will never forget who did this to us! pic.twitter.com/DaH1zILbg3

Maybe the Trump admin can explain to us what were these women & children doing in its beloved “rebels” prisons in #Douma?! And why they are happy now after arriving to the Syrian army posts?! pic.twitter.com/285UWKiO13

This won’t be reported by the Western media. Nor Trump will have the courage to do what he said about letting “other countries take care of it now.”
He could not even contain the fire burning within the White House.
As for Israel, 3 out of 8 missiles successfully hit Syrian targets, the MoD confirmed. 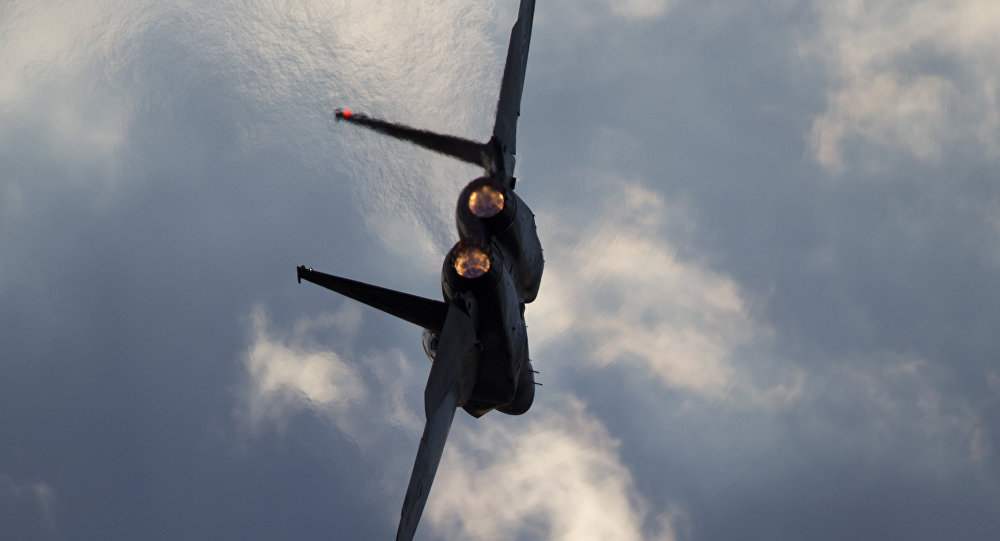 Israel has yet to confirm the information, while local media reports suggested that the IDF spy jet had been spotted in the area.
The Russian Defense Ministry has stated that it had been two Israeli warplanes that had attacked a Syrian government T-4 airbase in the Homs province early on Monday.
“On April 9, from 03:25 to 03:53 Moscow time, two Israeli Air Force F-15 jets, carried out an airstrike by two guided missiles on the T-4 airfield from the Lebanese territory and without entering Syria’s airspace.”
According to the Russian military, the strikes were carried out from Lebanese airspace.
Five out of eight strikes, carried out by the Israeli F-15 jets, were destroyed by Syrian air defenses, the ministry said.
“Three missiles reached the western part of the airfield. There are no Russian [military] advisers among those injured.”
While the Israeli authorities have abstained so far to comment on the incident, the country’s Air Force had bombed the same airbase in the Homs province back in February.