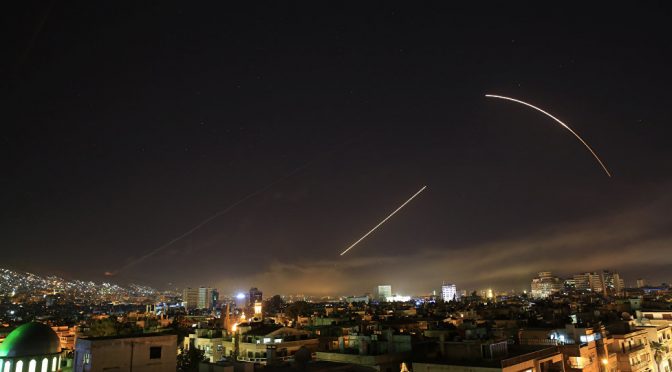 It has begun. The Western aggression to start kinetic WW3 has been unleashed jointly by the US-UK and France military against militarily inferior Syria, all of which are based on the “red line”chemical attack perpetrated by the UK-based pseudo humanitarian White Helmets.
Early on Saturday, the US, the UK and France fired more than 100 missiles from ships and manned aircraft at Syria in response to an alleged chemical attack in the city of Douma blamed on Damascus.

“Last year, President Trump made clear that the use of chemical weapons crosses a red line. Tonight, under American leadership, the United States, France and the United Kingdom enforced that line,” an Israeli official told Reuters on condition of anonymity.
He stressed that missile strikes at Syria are “justified.”

This aggressive action against the Syrian is meant to provoke Russia into a war that will free the Khazarian Mafia from last month’s Chinese inauguration of PetroYuan and the decade long systematic and massive global dumping of the petrodollar.
China has put a choke hold on the Deep State financial system by launching its PetroYuan, beginning March 26th of this year. This is one of the geoeconomic weapons that has been considered for years post WTC-911 “War of Terror,” which plunged the whole world into aggressive intrusion to privacy and outright regime changes against countries where leaderships are independently minded.
This latest Western action illustrates the inability of the White House to control Pentagon, whose current secretary even deceptively acknowledged the absence of evidence to the chemical attack of Douma, Eastern Syria, as allegedly perpetrated by the Assad government.
If Trump is being threatened to approve of such decision by burning one of his high rise properties in New York, then the same is not fit for the job to free America from the Khazarian control.
This is the time for the Americans to do whatever is needed to be done, or it’s too late.The featured article below was written a few days prior to the US coalition strike in Syria.

Russia vs the West: A War Scenario and a New Logic of Confrontation

Indeed, with continued American inaction, the fate of the planet rest on how the RIC Alliance would respond to this latest Deep State aggression against Syria.

Statement by the Ambassador Antonov on the strikes on #Syria:
A pre-designed scenario is being implemented. Again, we are being threatened. We warned that such actions will not be left without consequences.
All responsibility for them rests with Washington, London and Paris. pic.twitter.com/QEmWEffUzx

In the meantime, the Syrians are happy to have thwarted this latest attack on their sovereignty, using Russian made air defense system.

#Syrians rushing to Umayed square celebrating the failure of #US aggression against #Syria. pic.twitter.com/BrVPHDI7s2

8 thoughts on “Russia vs the West: A War Scenario and a New Logic of Confrontation”