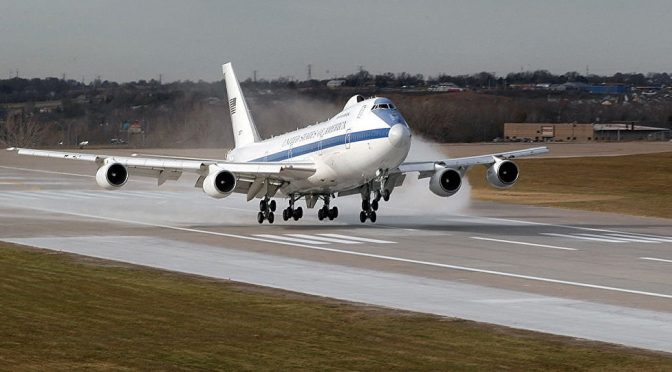 Although we have seen the successful repulsion of the recent US/UK/France missile attacks on Syria, to create the pretext for Russian retaliation and start a visible World War 3 that would, in turn, provide the necessary distraction for the American people regarding the impending petrodollar collapse, this is still very much a continuing event.
Just after the US President Donald Trump told Russian counterpart Vladimir Putin to “get ready” for a missile strike, the doomsday aircraft took to the sky.
https://youtu.be/sxUz96LlI4c
The US forces put the Boeing E-4B Nightwatch plane into the air directly from Wright-Patterson Air Force Base in Indiana. The Nightwatch – also known as the Doomsday Plane – is an airborne nuclear war command center and a mobile communications hub. It allows the US to maintain a chain of command in the event of a major war.
Understandably, Pentagon officials declined to give any information about the flight which came amid fears of an imminent World War 3.

The Russian government complemented the US action with a bomb shelter drill, and through its own state TV, told the viewers to pack essential stuffs for WW3 scenario.
The Russian Special Forces were also reported to have been activated and responsible for the electronic takedown of one Greek-based NATO warplane at the disputed area between Greece and Turkey.
Spetsnaz operatives are known to speak different languages and have also embedded themselves in NATO countries for real time activation.
It must be remembered that Turkey’s decision to work with the Russians triggered the Deep State that almost toppled the Erdogan government in July 15, 2016. The attempted coup is said to be led by Gen. John F. Campbell of the International Security Assistance Force (ISAF), a NATO security mission in Afghanistan.
It was about the impending construction of the natural gas pipeline from Russia to EU via Turkey, that would surely kill the petrodollar earlier on, in response to the slew of Western sanctions against Russia that was considered to be an act of war against the latter.

“I believe that both the Turkish Stream and Nord Stream-2 will be implemented because they coincide with the interests of our counterparts: Western Europe, represented by Germany, and Turkey. This ensures a much higher level of freedom for Russia in terms of its energy exports to Europe as Trump openly said that he views Europe as a ‘fodder base’ for US companies.” – Alexei Zubets, deputy-rector of the Financial University with the Russian government.

For its part, China has recently put a choke hold on the Petrodollar via PetroYuan futures exchange, as inaugurated with the massive naval exercise in the South China Sea last month, and of which the Philippine government was advised in advance.
The question now is, what other choices does the Deep State have apart from going an all-out war that don’t require them to be on the frontline, but the stupid uniformed personnel of the US-NATO Alliance?
That stupidity starts from the top with Mattis, who said that there was no evidence regarding Assad chemical attack on his own people, only a few days ago, but her own spokeswoman now confirms and proud to have hit every target in Syria.


The operation, of course, failed miserably…

At a rally in Damascus today, celebrating their victory in shooting down American missiles. The Syrians I'm meeting are unbelievably friendly.. I talked to a soldier at the rally and when I said I was American, he beamed and said "welcome! We still love you" pic.twitter.com/czqXkuUxNv

.@mod_russia : of 103 missiles, 71 intercepted by Syria’s air defences. No serious damage at airfields. Two former industrial sites hit with no people or equipment in place.https://t.co/7g05zNTWoX pic.twitter.com/0qqNZ2Pfvu

Hey Trump fans….how's that Q Anon bullshit working out for you now? https://t.co/5mbz9hVzUK