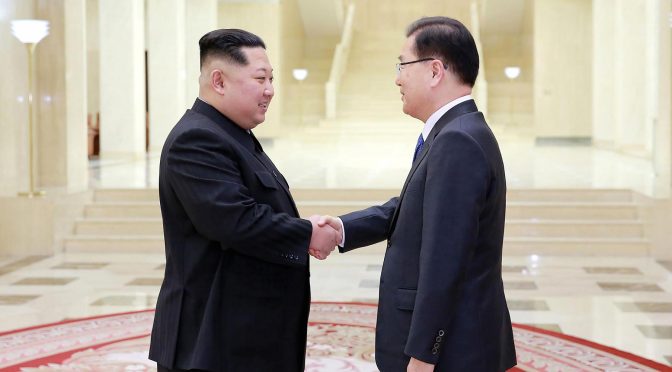 It is ironic in many respect that the government that is causing decades of misery and fear against the Koreans is claiming that its “maximum pressure” is working towards the realization of peace on the Korean peninsula. Thanks to the “strong leadership of @POTUS Trump,” said Mike Pence.

Welcome news. Maximum pressure is working. The American people and our Allies know we would not be at this point without the strong leadership of @POTUS Trump. US will keep the pressure on North Korea as plans for the Summit continue. America standing strong! https://t.co/bPKFxGCqsw

This statement comes in the aftermath of the West’s failure to start WW3 through its missile attacks on Syria, and its continued naval provocations in the South China Sea.
The glaring inconsistencies between rhetoric and actions may go unnoticed along some frozen synapses, but for the critical thinking brain cells, a history of deceptions is never forgotten.

The DPRK is also mindful of America’s lack of good faith. Its leadership hasn’t forgotten US abandonment of the 1994 Agreed Framework, explained earlier as follows:
Pyongyang agreed to freeze and replace its nuclear power plant program with a light water nuclear reactor, along with steps toward normalizing relations with Washington.
The Clinton administration agreed to build two light-water reactors by 2003. In the interim, it would supply Pyongyang with 500,000 tons of heavy fuel annually.
US sanctions would be lifted. The DPRK would be removed from the State Department’s state sponsors of terrorism list. Both countries agreed to provide “formal assurances” against threatened or actual use of nuclear weapons.
Pyongyang agreed to allow Washington to monitor its nuclear sites. It upheld its part of the deal – collapsing after GW Bush declared North Korea part of an axis of evil in his first State of the Union address, breaching the agreement unilaterally.
US administrations consistently betray sovereign independent countries, why Washington can never be trusted under GOP or undemocratic Dem leadership. Rare exceptions prove the rule, none since the Soviet Union dissolved in 1991.
A nuclearized peninsula gives US administrations pause about attacking the DPRK. Abandoning its key deterrent leaves the nation vulnerable.
North Korea wants peace, unacceptable sanctions lifted, and normalized relations with the West.
Abandoning its most effective defense against possible US aggression may be too great a price to pay – given Washington’s permanent war policy, its rage for global dominance, its longstanding regime change policy against all sovereign independent nations.

The Koreans have been moving towards this direction right after the the reduction of US forces in the South and the secession of hostilities between the divided factions. They could have achieved peace decades ago.


Pyongyang’s move to halt nuclear and missile tests is more the result of collective efforts, including that of Russia and China, than US threats to “wipe off the map” North Korea, a top Russian senator says.
On Friday, the North Korean leadership announced it is freezing the nuclear and ballistic missile programs and scrapping a major test site. The development could be the “news of the year,” head of Russia’s Foreign Affairs Committee of the Federation Council, Konstantin Kosachev, believes.
Yet, it is not the end of the long-running crisis in the region which was once “at the threshold of a nuclear conflict”. Much more lies ahead – from North Korea returning to the Treaty on the Non-Proliferation of Nuclear Weapons and cooperation with the UN nuclear watchdog, to Washington abandoning its aggressive rhetoric.
However, progress in the Korean Peninsula crisis was made possible thanks to the efforts of “five countries” – members of the six-party talks – that, apart from the US, include North and South Korea, Japan, China, and Russia.

It is the combined military forces of China and Russia that is giving the assurance of peace in the Korean peninsula and not persistent US pressure on South Korea for more THAAD missile installations, which is one of the root causes of the multiple North Korean missile tests prior to this day.
In short, there will be peace on this planet if Western aggressors stay and attend to their respective responsibilities at home. The domestic issues that keep hounding the Trump administration will never be covered up by any imagined accomplishments abroad.
The trump’s presidency has been compromised long before it was inaugurated. The lack of political will is only making it worse, while his patent blustering — an annoyance.
Certainly, the token release of Pentagon 911 photos doesn’t count. A parade of Nazis is more like it.
Nevertheless, the two Koreas will definitely accommodate US appetite for limelight in all positive developments, it can throw its weight into. But the world, at large, is looking forward to the positive developments inside the once a upon a time beacon of freedom and hope, that was America, that got the incumbent White House resident elected in the first place. The raid on his attorney’s office is the final coffin to the draining of the swamp campaign slogan.
In hindsight, America will only bend its back a bit when everything else that it does is met with organized resistance from other superpowers.  This time around, the US government really has no other card to play with. A looming bankruptcy and massive sovereign gold repatriations will only make its economic conditions much worse.
That is expected to cause a mass riot in a few months. Incidentally, in 2013 the Homeland Security has been reported to have purchased $1.6 billion worth of hollow pointed ammunition to last a protracted battle with armed civilians.
What keeps the American Revolution at bay perhaps, is the effective psyops conducted by mostly unknown, or coded, names claiming to have deep ties to embedded intelligence sources that talk and promise a lot of action that doesn’t translate to verifiable operations.
There is indeed some wisdom and irony when the Syrians were the ones wishing “God, Bless America,” while US Tomahawks were raining down on Damascus, days ago.