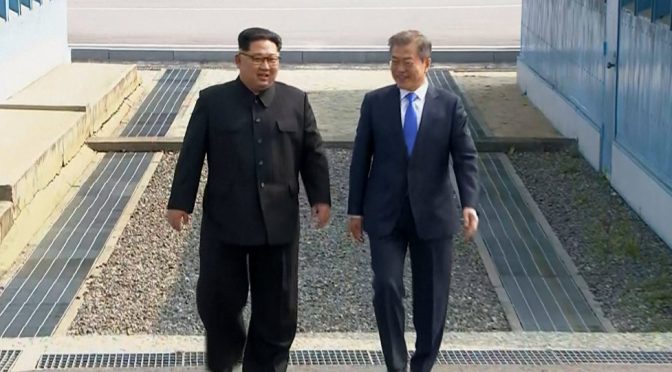 On April 20, in Pyongyang, the Third Plenary Meeting of the Seventh Central Committee of the Worker’s Party of Korea was held “to discuss the policy issues of a new stage in line with the demand of the important historic period of the revolution’s development.”  A plenary session ranks second in importance in intraparty actions after a congress, and typically is not assembled for ordinary matters.
The decree “On the announcement of the great victory of the course for parallel management of economic development and the development of nuclear armed forces” announced triumphantly that:

News that North Korea has suspended missile and nuclear testing, and also closed down the nuclear test site in the north of the republic, caused an explosion in the world’s news media, so that a few of them even broadcast news such as “North Korea is ceasing its nuclear program.”  As one could note, that is not quite so.  No promises to renounce nuclear weapons were given, and North Korea proposed a moratorium on the development of a nuclear missile program first, then Russia and China.
For the most part, the moratorium was received positively.  Donald Trump tweeted that “This is very good news for North Korea and the World – big progress! Look forward to our Summit.”  South Korea’s president Moon Jae-in also said that the moratorium is “progress for the denuclearization of the Korean peninsula.  This will create a favorable environment for achieving further success in the upcoming summit between North Korea and the USA.”
China’s Ministry of Foreign Affairs approved Pyongyang’s actions, “which through dialog and negotiations will promote relief of concerns of all interested parties, and facilitate the improvement of mutual relations.”  This “will allow step-by-step improvement of the situation on the Korean peninsula, ensure denuclearization, and render assistance in reconciling existing contradictions in a peaceful way.”
Japan’s Prime Minister Shinzō Abe welcomed Pyongyang’s announcement, calling it “forward progress.”  Along with that, he stressed that the main policy of Tokyo, and also of Washington and Seoul, remains unchanged with respect to North Korea, and called upon everyone to pay very close attention so that the announcement leads to the “complete, controllable, and irreversible destruction of nuclear weapons, weapons of mass destruction, and ballistic missiles.”  Japan’s Minister of Finance, Tarō Asō, also stated that Pyongyang’s intentions must be “carefully studied.”
South Korean political circles had mixed reactions to the North’s decision.  If the ruling Democratic Party, Tŏburŏ, welcomed it, noting that it will provide “additional impulse to the movement toward peace and mutual prosperity on the Korean peninsula,” then the opposition party “Free Korea” expressed skepticism, stating that Pyongyang’s declaration does not correlate with the goal of “complete, verifiable, and irreversible” denuclearization.  “Since there are already nuclear weapons in North Korea, its decision not to conduct further nuclear tests has little significance.”
This author shall comment on this step in the following way:

Konstantin Asmolov, PhD in History, Leading Research Fellow at the Center for Korean Studies of the Institute of Far Eastern Studies of the Russian Academy of Sciences, exclusively for the online magazine “New Eastern Outlook.”